The other day Pope Benedict XVI announced his intention to resign the papacy at the end of this month. The news produced a big splash internationally but barely a ripple on Martha’s Vineyard, preoccupied as we were with the approach of, the visit of, and our recovery from the storm widely known as Nemo. Why then am I blogging about the pope’s resignation in From the Seasonally Occupied Territories? As occupying forces go, the Catholic church is way down the list, and its local manifestations are fairly benign. 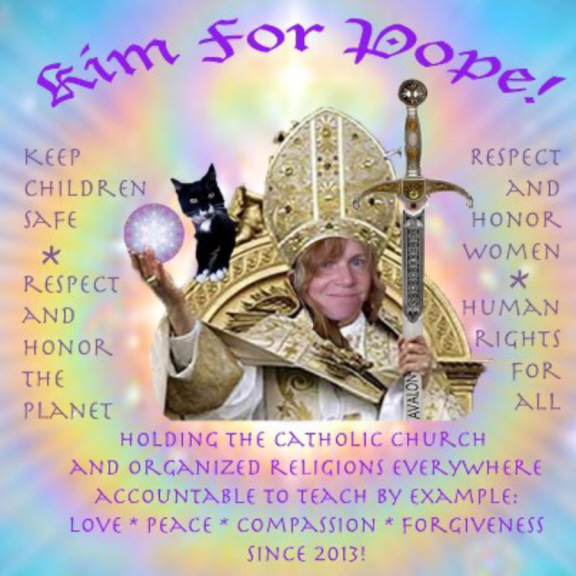 Graphic by Kim. The ability to wield Photoshop is key to successful popery.

Kim is a musician, a massage therapist, and the founder of MV Stuff 4 Sale. In the latter capacity she has proven her qualifications for sainthood, which last I looked were considerably more stringent than the qualifications for pope. Nevertheless, the Catholic Church maintains that while women are eligible to become saints, especially if we are killed in the line of duty, we are not eligible to become pope. As the poster proves, Kim looks pretty damn good in a miter. She also has the endorsement of her cat. What could possibly stand in the way?

You’re way ahead of me. Right you are: the College of Cardinals. The cardinals, like the pope, are all and always men. Kim is therefore campaigning among cardinals who through no fault of their own have been excluded from the college.

After a dramatic but untelevised debate . . . 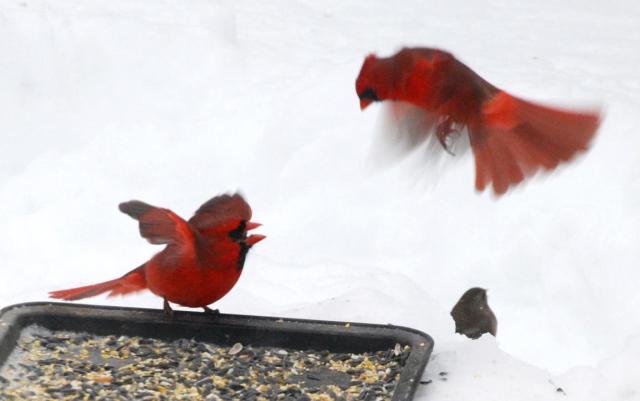 . . . the cardinals in Dan Waters’s backyard decided that Kim was far and away the best choice for pope, not least because she is a redhead and so are they. They then settled down to amicable eating.

We should all be so lucky. This blog wholeheartedly endorses Kim for Pope. The Cardinals Around the Food Pan Assembled have expressed some interest in becoming a College, as long as they don’t have to go to Rome. The living is much too good in Dan’s backyard.

Susanna edits for a living, writes to survive, and has been preoccupied with electoral politics since 2016. She just started a blog about her vintage T-shirt collection: "The T-Shirt Chronicles." Her other blogs include "From the Seasonally Occupied Territories," about being a year-round resident of Martha's Vineyard, and "Write Through It," about writing, editing, and how to keep going.
View all posts by Susanna J. Sturgis →
This entry was posted in Martha's Vineyard and tagged birds, Dan Waters, feminism, Kim Hilliard, religion. Bookmark the permalink.

7 Responses to Kim for Pope