You’ve probably heard that a major winter storm hit the U.S. Northeast in the last couple of days. Unlike some storms in recent years, this one pretty much lived up to the hype, but c’mon — Nemo? Who came up with that?

Martha’s Vineyard got off easy. We’re often south of the snow line when snowstorms hit New England. As snow started falling Friday morning, it seemed like the snow line ran down State Road. Friends in Christiantown, a mile or two away, had an inch of snow on the ground. My deck was covered with a scant quarter inch of slush. As usual, Vineyarders used Facebook to compare notes. This gave rise to such song titles as “Keep on the Slushy Side” and movie remakes like “Slush, Slush, Sweet Sharlotte.”

The temperature dropped, the slush turned snowy, and the wind howled. I’m not sure what the official snowfall measurement was, but I’d guess 6–8 inches, with considerable drifting higher and lower. Bad back be damned, Travvy and I went out exploring as dark fell on Friday. Home again, I reported to our Facebook buddies: “Storm inspection, WT School area: About two heavy inches of snow on the ground. Sleety snow falling, wind blowing. Big trucks out with serious plows on. Dark. Beautiful, a little scary.”

The electricity flickered several times but kept coming back. So when I went to upload a blog post, “Whine,” at about 7:30 p.m., I was surprised by the error message: my internet connection was down. Phone was dead too. They didn’t come back. As usual, I felt like a telepath who is suddenly locked inside her own head. This too shall pass, I thought, and resorted to reading: The Warmth of Other Suns, by Isabel Wilkerson. Great book. Hell with you, Facebook.

When I woke up Saturday morning, the electricity was on, phone and internet were still gone. My front door was frozen shut. My shovel was outside it. 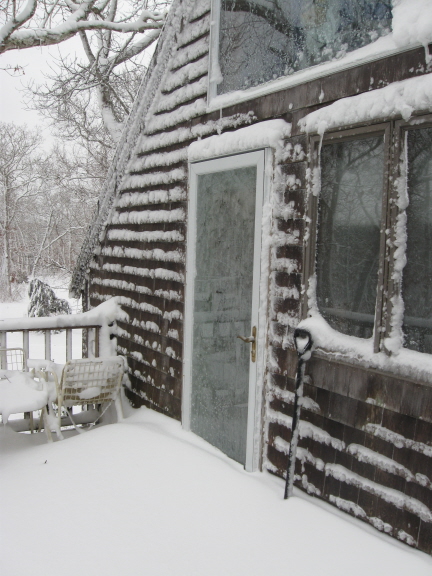 My downstairs door was likewise frozen shut, but the wind had done a good job of clearing the snow from the studio door so I went out that way. The stairs up to my deck looked, well, lumpy.

I tramped up the steps. The handle of my shovel was lined with ice. The snow piled in front of my door was crusty, icy, and hard. One poke with the shovel and my back yelped. Shovel in hand, I went back down the steps. The side door was easier. I sometimes go out that door. Travvy rarely does. When I called him to join me at the foot of the inside stairs, he gazed at me as if to say, You’re kidding, right?

I produced a chunk of string cheese. Travvy realized I was serious. Off we went.

Malvina Forester was decked out in snow. I didn’t worry: we weren’t going anywhere.

Here’s my little house. My apartment is on the second floor. My deck and front door are around back. The door you can see is the one to my neighbor’s studio. My side door is out of sight on the left.

A plow was hard at work clearing the West Tisbury School parking lot. The driver had been at it most of the night. 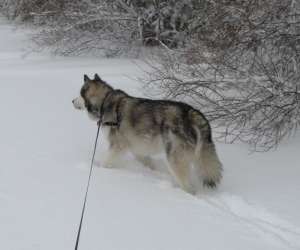 The fence at the tennis court looked like a snowy honeycomb.

My wonderful neighbors freed Malvina Forester from her icy cloak and also cleared my back stairs. Late in the afternoon a big mutha plow came to clear our driveway and Halcyon Way, the road I live on. I love watching the precision with which these guys maneuver their beasts. In my next life, maybe I will be a heavy-equipment operator.

Travvy and I went for another walk after sunset. We got home in full dark. I opened the front door — and the telephone was ringing! I had phone! I had internet! All was right with the world.

Susanna edits for a living, writes to survive, and has been preoccupied with electoral politics since 2016. She just started a blog about her vintage T-shirt collection: "The T-Shirt Chronicles." Her other blogs include "From the Seasonally Occupied Territories," about being a year-round resident of Martha's Vineyard, and "Write Through It," about writing, editing, and how to keep going.
View all posts by Susanna J. Sturgis →
This entry was posted in home, Martha's Vineyard and tagged Facebook, my neighborhood, snow, Travvy, winter. Bookmark the permalink.