Weather Underground says we’ve got more snow incoming — not much, they say — and I haven’t even got around to posting my pics of the last snow. Here goes.

Thursday morning I woke up to snow covering my skylights, two inches of snow on my deck. It was the kind of snow everybody who isn’t snowphobic loves: light, scenic, and gone by midafternoon. A marked contrast to last weekend’s heavy, crusty stuff that knocked out power, required heavy-duty plowing, and screwed people’s backs up. My back was already screwed up so I managed to get out of shoveling. (Thank you again, neighbors!) This time around, the snow was fluffy and my back was better. Shoveling was easy.

Snow makes even tire tracks look pretty. All the resident motor vehicles have all-wheel drive, so Wednesday night’s snowfall was no big deal. This is the back way out from our driveway.

Travvy and  I headed off down Pine Hill on our morning walk. No Yaktrax needed: the walking was easy.

We walk this way almost every day, sometimes in one direction, sometimes in the other. It’s not an especially scenic vista, but it catches my eye again and again, no matter what the season. The trail. The snow-dusted trees. The texture of the yellow grass rising above the snow.

Cold cotton, I thought, maybe because I’m reading Isabel Wilkerson’s The Warmth of Other Suns, a stupendously good book about the “Great Migration” of black people from the South to the North and West during the twentieth century. One of the main threads follows a woman who was a sharecropper on a Mississippi cotton plantation in the 1930s. The descriptions of the back-breaking work, the heat, and the virtual servitude in which the planters kept the sharecroppers are very, very vivid. 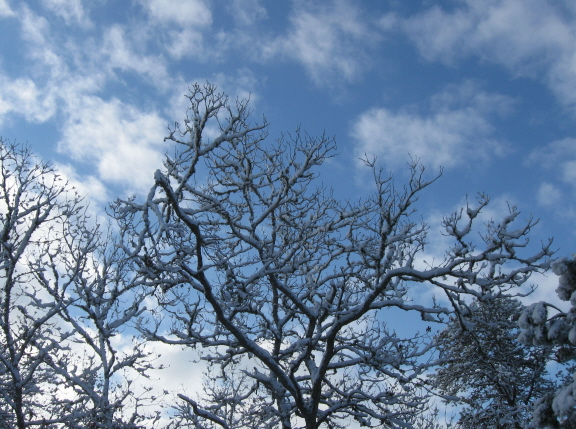 Susanna edits for a living, writes to survive, and has been preoccupied with electoral politics since 2016. She just started a blog about her vintage T-shirt collection: "The T-Shirt Chronicles." Her other blogs include "From the Seasonally Occupied Territories," about being a year-round resident of Martha's Vineyard, and "Write Through It," about writing, editing, and how to keep going.
View all posts by Susanna J. Sturgis →
This entry was posted in home, Martha's Vineyard, outdoors and tagged my neighborhood, snow, winter. Bookmark the permalink.