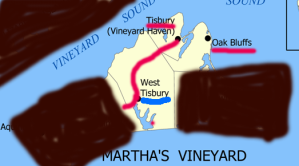 My psychic map of the Vineyard in August 2011. These days Edgartown is more real than it was then.

Sunday afternoon I delivered orders to two MVY Co-op members, one in Chilmark, the other in Aquinnah. It was a glorious day for a drive up-island, and anything past the West Tisbury–Chilmark line is off my psychic map. That means I think of it about as often as I think about the little toe on either foot. It also means it’s good to get up there once in a while, because Martha’s Vineyard is small enough without my acting as if a chunk of it isn’t there.

Anyway, the views from the road are stupendous, I managed to not get lost on Chilmark backroads, and the Chilmark co-op member left me a bunch of beautiful daffodils as a tip. Social distancing remains the rule, so, as directed, I left the groceries in a wood box at the end of the long, steep driveway and collected the flowers.

In Aquinnah the driveway was short, flat, and barely a driveway at all. An affable fellow walking by turned out to be (I suspect) a resident or at least a near neighbor; he recognized the tea on top of the grocery box. We exchanged greetings, he admired my navigator (Tam doesn’t just come along for the ride), and I set the box on the ground between us to avoid hand-to-hand contact.

If you’re wondering if I’ve left out some backstory — co-op? delivering orders? — you’re right. Here it is: Co-op pickup is currently on Sunday afternoon. Before social distancing, it was in a tiny office space in the Merchants’ Mart building across the parking lot from the Black Dog Café. Forget social distancing: with people arriving to pick up orders, transferring purchases from the co-op’s jars into our own containers, and paying for the goods if we hadn’t prepaid, it was virtually impossible to avoid bumping into each other, never mind stay six feet apart. So now pickup is at a convenient location that’s under cover and open air at the same time. Prepayment is now required, there’s no container transfer, and you sign up for a quarter-hour pickup slot when you place your order to avoid crowding.

As with many small co-ops, volunteering is encouraged. Most members pick up their orders, but home delivery is possible for a modest fee, so I volunteer to deliver in my town of West Tisbury and the neighboring towns of Tisbury and Chilmark. In a pinch I said I’d be willing to drive all the way to Aquinnah, where not all that many people live but, it seems, fewer are willing to drive. So when the co-op director asked, pretty much at the last minute (I was getting ready to leave home to pick up my own stuff), if I could make an Aquinnah run, I said sure.

Aside #1: Off-islanders and recent arrivals laugh their heads off when you complain about how far it is to Oak Bluffs or Edgartown, never mind Aquinnah, which seems even farther because it’s not on the way to anywhere else. They commute 20 or 40 or 60 miles twice a day five days a week and we’re bitching about driving 8 or 10 or even 20 miles? All I can say is “Islands queer distance.” Woods Hole is closer to Vineyard Haven than Oak Bluffs is to West Tisbury but it seems like it’s on another planet because you can’t drive there without getting on a boat.

Aside #2: Psychic maps can evolve. Look at my map from August 2011. At that time, I wrote: “My map starts to dissolve in the middle of the island about half a mile east of Barnes Road. Edgartown snaps into existence when I have to go there, then it slides back into the mist. Chappaquiddick might as well be in upstate New York.” The 2016 election changed that, in part because the point person for Indivisible Martha’s Vineyard lives in Katama and I could now find my way to her house blindfolded. I’ve also been to a bunch of films at the Edgartown library (the programming director books great stuff). Upshot is that Edgartown no longer seems so far away.

Come to think of it, the fact that I belong to a co-op at all is a sign that my psychic map is expanding a bit. This co-op is committed to greatly reduced packaging and to products that are 100% organic or close to it. Reduced packaging is a big plus with me, although COVID-19 has done away with BYO container, at least for the time being. I did buy a dozen quart-size Mason jars because beans, lentils, rice, oat groats, and everything else looks better on the shelves in glass jars than in the recycled yogurt containers I usually use.

The organic part — well, I’m slowly, slowly letting go of my conviction that, at least on Martha’s Vineyard, organic is mainly for those who can afford to pay for it. For a long time I was skeptical that products that claimed to be organic really were, and even when “organic” has to be certified, inspection and certification systems can be scammed. No question, I don’t want farmworkers subjected to blanket spraying or the land subjected to methods that reward short-term profits over long-term sustainability. I often say that how we spend our hours and our dollars is more important than how we spend our votes because we have a hell of a lot more of them to spend.

So if consumers buying organic sends a message to the growers, that’s a plus.

Not to mention — scoring 10 pounds in early April of the steel-cut oats from which I make my morning oatmeal was immensely satisfying, not least because it was more than a dollar less a pound than what I was paying for smaller quantities from the bulk bins at Cronig’s, and I didn’t have to use any plastic bags. In the age of COVID-19 those bulk bins are no longer available anyway, so it’s all good.

Oat groats in a 5-pound jar

Susanna edits for a living, writes to survive, and has been preoccupied with electoral politics since 2016. She just started a blog about her vintage T-shirt collection: "The T-Shirt Chronicles." Her other blogs include "From the Seasonally Occupied Territories," about being a year-round resident of Martha's Vineyard, and "Write Through It," about writing, editing, and how to keep going.
View all posts by Susanna J. Sturgis →
This entry was posted in Martha's Vineyard, outdoors, public life and tagged Aquinnah, Chilmark, COVID-19, election 2016, food, MVY Co-op, psychic map. Bookmark the permalink.