A is for Aquinnah #AtoZChallenge

A is the beginning but Aquinnah is the end, the equivalent of Land’s End on Martha’s Vineyard, as far as you can go before you fall into the ocean. 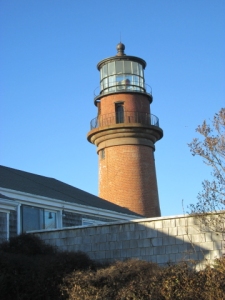 The Gay Head lighthouse, which in 2015 was moved back from cliff brink to keep it from tumbling into the ocean.

Of course much depends on where you live and where you’re standing at the moment. If you live in Aquinnah, it’s the beginning and the center. All of us on Martha’s Vineyard have our own psychic maps of the place. When I first wrote about “My Martha’s Vineyard,” when this blog was young, my psychic map of the Vineyard stopped at the West Tisbury–Chilmark line going southwest and about a half mile east of Barnes Road going east. Now it extends as far as Beetlebung Corner in Chilmark and some parts of Edgartown have come into focus, but Aquinnah still isn’t on it.

I do know how to get there, however. More about that in a bit.

If you live on Martha’s Vineyard, even if you aren’t a mariner or a fisherman or someone on first-name terms with the sea, you come to see water not as a barrier but as another kind of road. When I hadn’t been here long year-round, I heard the late Helen Manning, Wampanoag storyteller, talk about how when she was a girl, Gay Headers often did their shopping and other business in New Bedford: it was easier to get to New Bedford by boat than down-island by land because the roads were so bad. That swept my landbound assumptions out to sea and transformed the way I read maps.

Aquinnah never appeared in my first novel, The Mud of the Place. I don’t believe it was even mentioned. (My characters seem to share my psychic map.) But it’s a significant setting in Wolfie, my novel in progress. It takes place maybe 10 or 12 years after Mud, and Shannon Merrick is once again a main character. Shannon’s long-estranged younger sister, Jackie, comes to visit on Thanksgiving weekend. Shannon gives sister Jackie the grand tour, starting in Edgartown, moving up Beach Road to State Beach, thence to the Campground in Oak Bluffs and eventually to Aquinnah and the Gay Head Cliffs. 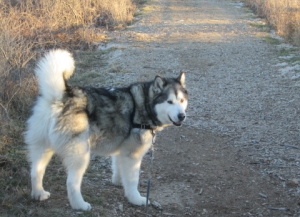 Travvy, aka Wolfie, on the path to Moshup’s Beach

On the way they’re gingerly exploring memories of the violent alcoholic family that shaped them both and contributed to their long estrangement. The climactic revelation comes, of course, while the two women walk (with Wolfie, the book’s title character) along the beach near the Gay Head Cliffs.

On their way to the beach, Shannon takes Jackie to the lookout near the shops (which are closed and deserted, it being late November):

“Come see the real end of the island,” Shannon said, and led the way between the silent shops to the observation area. Wolfie sniffed at every rock, every clump of grass, until Shannon crinkled the string cheese wrapper in her pocket. That got his attention. After she bit off a chunk and fed it to him, he couldn’t take his eyes off her face.

The stolid cliffs jutted impressively into the water, but it seemed the tops of them were being pushed back by invisible hands. “It’s all clay,” Shannon said. “You’ll see the colors more clearly when we go down to the beach.” She pointed down toward where waves breaking on the rocky beach made a lacy necklace around the base of the cliffs. “That down there is Moshup’s Beach. Moshup was the legendary giant of the Wampanoags. He lived in the cliffs, caught whales one-handed, cooked them up here, and shared the meat with his people. Supposedly he had quite a temper, and when he got angry the weather got wild.”

“Maybe he’s still there,” Jackie said, pulling the edge of her knit cap closer to her ears. The wind was blowing strong off the water.

Shannon pointed toward the expanse of rippling ocean. “Out there is Devil’s Bridge. It’s built from the boulders Moshup hurled at the whales to knock them out.”

Shielding her eyes against the sun, Jackie gazed where Shannon was pointing. “I can’t see anything,” she said.

“Neither can the ships, till their hulls are on the rocks,” said Shannon. “That’s how it got its name.”

When the time came to write Shannon and Jackie’s sightseeing tour, in January 2016, I made my own trek to Aquinnah. This was a good thing, because my recollection of the lay of the land near the cliffs was not all that great. Of course I took Travvy, my malamute sidekick, on whom Wolfie is based, and of course I blogged about it, with photos, in “Trip to the Cliffs.”

So why did this intimate and difficult conversation happen on the beach at Aquinnah? Because this is a place of power, one where the constraints and inhibitions of more familiar places don’t apply. So Aquinnah may at the same time be the Vineyard’s equivalent of Land’s End and a place of beginning.

The road to Aquinnah, and the road back home

Susanna edits for a living, writes to survive, and has been preoccupied with electoral politics since 2016. She just started a blog about her vintage T-shirt collection: "The T-Shirt Chronicles." Her other blogs include "From the Seasonally Occupied Territories," about being a year-round resident of Martha's Vineyard, and "Write Through It," about writing, editing, and how to keep going.
View all posts by Susanna J. Sturgis →
This entry was posted in Martha's Vineyard, outdoors, writing and tagged A to Z Challenge, Aquinnah, off-season, psychic map, Travvy, Wampanoag tribe, Wolfie, writing. Bookmark the permalink.

7 Responses to A is for Aquinnah #AtoZChallenge