Which Martha’s Vineyard do you live on?

All the road maps and atlases agree that there’s just one Martha’s Vineyard, but none of us live on those maps. I’m talking about the map that lives in each of our heads. Call it our psychic map. No two psychic maps are exactly the same, though you’ll almost certainly find the Steamship Authority dock in Vineyard Haven on just about everyone’s map, be they day-tripper, summer visitor, recent arrival, longtime year-rounder, or island native.

For many summer people, the island winks into existence in late spring and winks out again around Columbus Day. For year-rounders there’s no winking in and out, but some parts of the Vineyard are much realer than others, and some don’t exist at all. Here is the Martha’s Vineyard I live on: 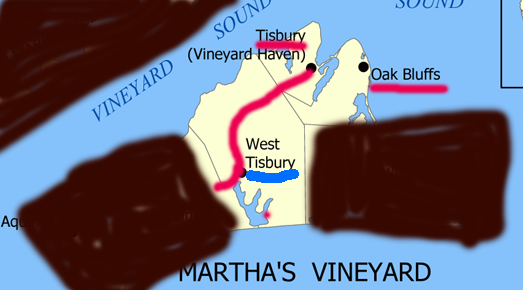 On my Martha’s Vineyard, State Road ends at my friend Cris’s road, across from what is now the Grey Barn and Farm. If Martha’s Vineyard were flat, Chilmark and Aquinnah would be over the edge, in “Here be dragons” territory. Yes, I can find my way to Beetlebung Corner, the Gay Head Cliffs, and Menemsha, but unless I’m en route to or from, they’re wavery to nonexistent on my psychic map.

My map starts to dissolve in the middle of the island about half a mile east of Barnes Road. Edgartown snaps into existence when I have to go there, then it slides back into the mist. Chappaquiddick might as well be in upstate New York. At the Edgartown post office, I rarely recognize anybody either in line or at the counter. That’s how I know I’ve crossed the border into another country. When I go to Reliable Market in Oak Bluffs or up-Island Cronig’s in West Tisbury, I recognize the cashiers and many of the customers. When I go to either the Stop & Shop in Edgartown or the one in Vineyard Haven, I can’t find anything and I don’t know anyone. Try going to a supermarket or a post office that you rarely visit. See if you don’t feel at least a little out of place, not quite at home.

That rose-colored squiggle on my map is (don’t laugh) State Road. All but 2 of my 26 years on the Vineyard have been lived within a mile of State Road, about half in Vineyard Haven and half in West Tisbury. Many longtimers and island natives identify strongly with one town. I’m sort of a bi-townie with a third affinity for Oak Bluffs, where I’ve had a lot of friends over the years and spent a lot of time.  I feel most at home when I’m within hailing distance of State Road.

Over the years my psychic map has evolved. Getting back into horses at the end of 1998 overhauled my map in a big way, bringing new places and people into focus while familiar ones receded into the background. Horses, I learned, leave little time or energy for other serious commitments, which is why there’s very little overlap between, say, horse people and theater people: horse people and theater people live on different Martha’s Vineyards. When I sold my horse in 2010, the horse places dimmed on my map, but they retain a vestigial presence that they didn’t have before.

People often talk about Martha’s Vineyard as if it’s one big community. It isn’t. Martha’s Vineyard is made up of many overlapping communities that exist in one geographical space. Our psychic maps are so different. A place familiar to me may barely exist for you. A venue that you find welcoming may turn a cold shoulder to me. The Island’s real fault lines don’t lie between the six towns but between the maps we have in our heads.

So, if you live in the U.S. — which United States do you live in? (Feel free to substitute the country, state, province, or other geopolitical unit of your choice!)

Susanna edits for a living, writes to survive, and has been preoccupied with electoral politics since 2016. She just started a blog about her vintage T-shirt collection: "The T-Shirt Chronicles." Her other blogs include "From the Seasonally Occupied Territories," about being a year-round resident of Martha's Vineyard, and "Write Through It," about writing, editing, and how to keep going.
View all posts by Susanna J. Sturgis →
This entry was posted in Martha's Vineyard and tagged Edgartown, Oak Bluffs, psychic map, State Road, Steamship Authority, Vineyard Haven, West Tisbury. Bookmark the permalink.

11 Responses to My Martha’s Vineyard