Seems everyone’s mumbling and grumbling and wondering “Where’s spring?” as if chilly weather in mid-May were unusual, alarming even. 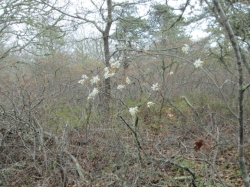 Every year in early May I’m convinced I missed the shadbush blooming, ghost flowers floating in woods where the oaks are just beginning to bud. I’m convinced they’re supposed to bloom by the end of April.

I noticed the first ones around the 5th. Within a couple of days they were everywhere I looked. They’re still out there, just beginning to fade and fall.

Photographs I’ve taken in past years tell me that May 6–10 is about right. Could be I got the late April idea in my head when I was living on the Vineyard Haven side of the West Tisbury line. Spring — meaning the flowering of forsythia and daffodils and the sudden brightening of the winter landscape — arrives earlier in Vineyard Haven than it does in West Tisbury, and it arrived earlier in West Tisbury center than it did on my road, but it is arriving.

Last year, in “Is That You, Spring?,” I blogged “Most of the time it’s been feeling like mid or late April” — on June 2, facrissakes.

This is why I don’t believe myself or anyone else when we swear this is the coldest spring, the snowiest winter, the driest summer ever, or at least in years. Photographs or the written word usually tell me otherwise.

I get why some people don’t believe in climate change. Our year-to-year memories are unreliable, and often influenced by other people’s perceptions. Photographs, or written words, and the patient recording of statistics year after year — these are essential to temper and even contradict our extravagant claims. 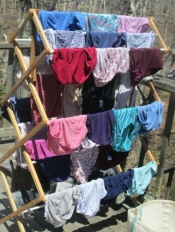 Undies on the drying rack. Socks are on the backside, bras somewhere in the middle.

So I track the changing seasons with the clothesline in the back yard. (From November to April I do it with ice disks, but “Ice in August” appears only in my blog.) There’s a two- or three-week lag between the clothes on the line and the actual weather because I do my laundry at the Airport Laundromat whenever I’m about to run out of underwear, and I’ve got an almost three-week supply of that.

The clothes at the bottom of the laundry hamper, in other words, haven’t been worn for up to three weeks. This time of year, that’s where you’ll find the longjohns and sweaters. In late fall it’s T-shirts and shorts.

Note that there were only three pairs of longjohns on last Friday’s line, and no sweaters. One warmish day in mid-April I didn’t put my longjohns on before my jeans. Once I’ve taken this momentous step, the pressure is to leave them off, even when the wind is blowing hard enough to cut through denim.

Turtlenecks share the line with long-sleeve T-shirts, and even three regular Ts. The latter include my two newest: WTFJHT, for What the Fuck Just Happened Today, a daily e-newsletter that I love and do some volunteer copyediting for; and S.W.A.T. / Smart Women Against Trump, a local issue that I acquired by being in the right place at the right time. My T-shirt collection has been out of control for a long time, but there’s always room for another good one.

I could actually use a couple more long-sleeve Ts. They’re perfect for the swing seasons, mid-spring and mid-fall, but they don’t come my way very often.

For contrast, here’s the line from April 5. No T-shirts anywhere, long- or short-sleeved. To the trained eye (e.g., mine), the telltale sign is the number of longjohns: only four. I’ve got twice that many, and in midwinter they’re all out there.

And here is the line from February 27 — Travvy’s 10th birthday. He hit double digits and all he got was a trip to the laundromat. While my clothes wash, we take our morning walk around the county airport.

Winter clothes tend to be as drab as the woods, which is why I love seeing that yellow turtleneck flapping on the line. Its cuffs and neck are frayed beyond wearing in polite company, but I don’t spend much time in polite company. Not only does it still keep me warm, it brightens my winter laundry line. 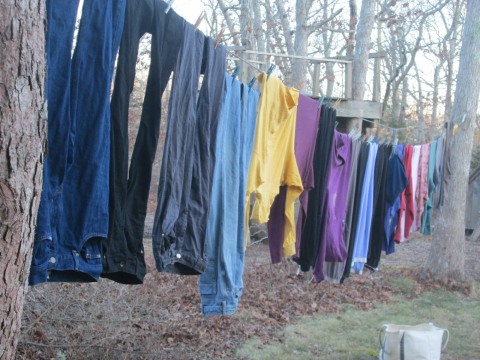 Susanna edits for a living, writes to survive, and has been preoccupied with electoral politics since 2016. She just started a blog about her vintage T-shirt collection: "The T-Shirt Chronicles." Her other blogs include "From the Seasonally Occupied Territories," about being a year-round resident of Martha's Vineyard, and "Write Through It," about writing, editing, and how to keep going.
View all posts by Susanna J. Sturgis →
This entry was posted in home, outdoors and tagged laundromat, laundry, spring, T-shirts, Travvy, Vineyard Haven, weather, West Tisbury. Bookmark the permalink.