Note: This post first appeared on the new website of the Women’s Committee of We Stand Together / Estamos Todos Juntos (WST/ETJ), which I manage; it has been updated and revised. If you live or spend time on the Vineyard (or even if you don’t!) and want to keep informed about events and activities of particular interest to women, please stop by and follow it (aka “subscribe”).

Before Friday morning was out, news arrived of yet another school shooting, this one at the Santa Fe, Texas, high school. Eight students and two teachers were killed and ten others wounded, including a school resource officer who at last report was in critical but stable condition.

Once again the shooter was a white man: 17-year-old student Dimitrios Pagourtzis surrendered to law enforcement at the scene and has confessed to the crime. And once again a (white) shooter was taken into custody alive, as opposed to the numerous black non-shooters who are shot and killed for carrying cell phones, reaching for their driver’s licenses, etc.

Also in the déjà vu department, it’s been reported that the alleged shooter had a grudge against women, particularly Shana Fisher, a student who had declined to go out with him. She was  one of the dead. Pagourtzis has also reportedly said that he targeted people he didn’t like and spared people he did. One of the dead was Sabika Sheikh, an exchange student from Pakistan. I can’t help wondering if this has any connection to the guy’s posting of neo-Nazi imagery on social media.

News of the latest school shooting spread quickly on social media and via email, and despite the short notice about 15 Vineyarders gathered at Five Corners at 5:30 to mark the event, honor the dead, and call for stronger gun-safety laws. Both the Martha’s Vineyard Times and the Vineyard Gazette covered the event.

Many passing vehicles honked, waved, or called out their support. One fellow, however, driving a late-model pickup that was almost big enough for a tiny house, held up traffic while he vociferously protested the protesters.

By the way, there was a school-related shooting in Illinois on Thursday, fortunately with no fatalities; the only injury was to the gunman, a 19-year-old — you guessed it — white guy. While fleeing the scene, this fellow fired at a pursuing school resource officer, yet the officer managed to bring him down by wounding him. Interesting, no?

Friday night in the Atlanta area, one woman was shot and killed and another wounded near a high school graduation. Reports are still sketchy, and it’s not clear if the shooting had any connection to the graduation. 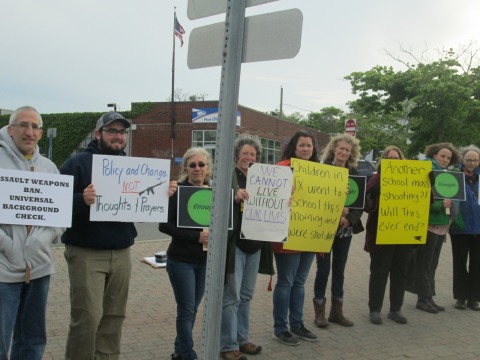 That’s me near the middle, just to the right of the signpost.

Susanna edits for a living, writes to survive, and has been preoccupied with electoral politics since 2016. She just started a blog about her vintage T-shirt collection: "The T-Shirt Chronicles." Her other blogs include "From the Seasonally Occupied Territories," about being a year-round resident of Martha's Vineyard, and "Write Through It," about writing, editing, and how to keep going.
View all posts by Susanna J. Sturgis →
This entry was posted in outdoors, public life and tagged Five Corners, guns, politics, We Stand Together, women, Women's Committee. Bookmark the permalink.

2 Responses to Rally for Gun Safety