We had a winter last winter, remember? As in previous winters, I decorated my little deck with ice disks and posted new ones on Facebook. When spring finally arrived, I didn’t have the heart to remind people of the winter just past so I never got around to posting an ice disk round-up here.

Aha! I thought. When summer rolls around, we’ll be glad to look at ice disks. Well, for the last hazy, hot, and humid week or so I’ve been wishing I had an ice disk to rub on my face and maybe stick under my shirt. Unfortunately it was too hazy, hot, and humid to do any more work than I absolutely had to.

Today, however, it’s hazy and humid but not quite as hot, so here’s a little gallery of ice disks gone but not forgotten. 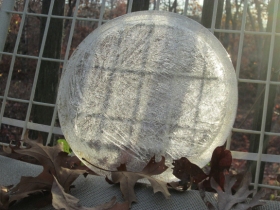 First ice disk of the season 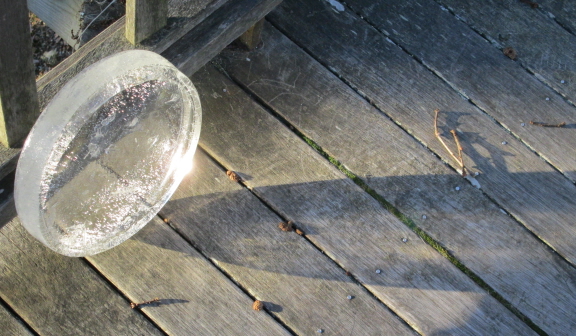 Around the winter solstice I put my lights up. By the end of December it was cold enough that the disks didn’t always melt during the day. It snowed now and then, but we had no idea what was coming.

The colder the night, the thicker the disk. 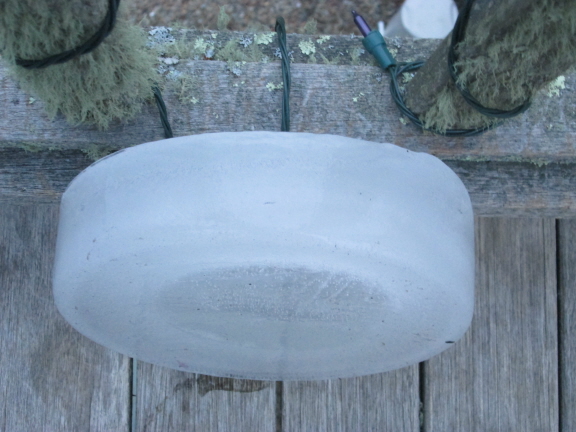 Between the wind, the sun, and a rambunctious dog, the deck sometimes looked like an ice disk battlefield.

Winter started in earnest at the end of January when a blizzard dumped about two feet of snow in my neighborhood. This was unusual. What was really unusual was that it didn’t melt away in a week or so. We had snow on the ground till the end of March.

On February 4, I had a septet. 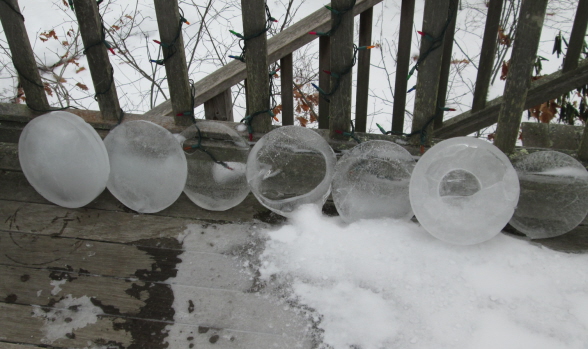 Life saver. This one is second from right in the septet photo above. 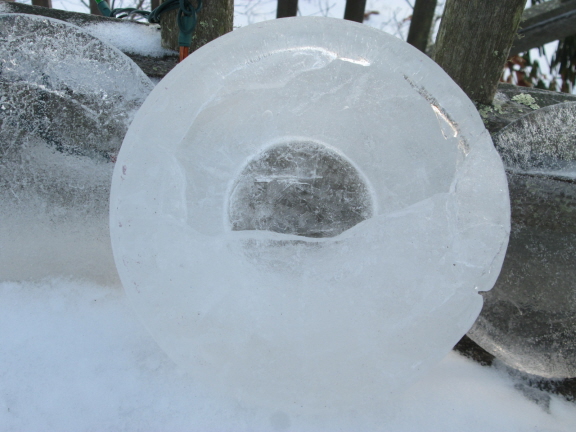 My old point-and-shoot died of exposure when I left it out in the rain. In its time it had photographed many an ice disk. This seemed a fitting tribute.

Maybe I’m easily amused, but I love this stuff.

No ice disks in this one, but the lights and the snow did their own dance on the deck railing.

Stick Travvy’s bone in an ice disk and who can blame him for trying to take it back? Not to mention that he gave up the use of his outside water dish for most of the winter so I could make dog dish ice art. 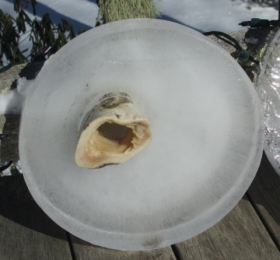 On February 21, I set a new winter record for most ice disks: 13. Getting them all in one photo was too much of a challenge, which is why you’ll only count 12 in the bottom photo. But there really were 13. Meaning for 13 consecutive days the temperature didn’t get above freezing, even on my desk which gets direct sunlight from midmorning to late afternoon.

I’ve got dozens more to choose from, but you’re feeling cooler now, right?

If it stays hazy, hot, and humid, maybe I’ll post some more in a few days.

Susanna edits for a living, writes to survive, and has been preoccupied with electoral politics since 2016. She just started a blog about her vintage T-shirt collection: "The T-Shirt Chronicles." Her other blogs include "From the Seasonally Occupied Territories," about being a year-round resident of Martha's Vineyard, and "Write Through It," about writing, editing, and how to keep going.
View all posts by Susanna J. Sturgis →
This entry was posted in home, outdoors and tagged ice disks, summer, Travvy, winter. Bookmark the permalink.

3 Responses to Ice in August