Most mornings Travvy and I walk around part of the big field at Misty Meadows. Owned by the Sheriff’s Meadow Foundation, a conservation group, it’s leased to two Chilmark farms, Mermaid and North Tabor. From time to time, thanks to the wondrous portability of electric fencing, livestock take up residence in some part of the field. We’ve seen goats and we’ve seen sheep, and just now we’re seeing cattle — not for the first time, but it’s been a while.

When we passed by yesterday, most of them were grazing or snoozing. 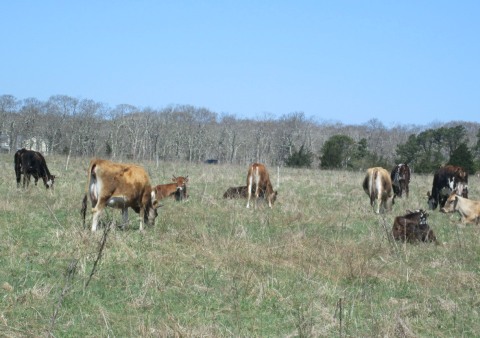 Then one cow took notice and came over to check us out. Another made ready to follow suit.

Trav does not find cows as fascinating as he does either goats or sheep, possibly because they tend to move slowly and deliberately. He also has a healthy respect for electric fencing, having accidently bumped into it on a narrow path a couple of years ago. The late Rhodry, being a barn dog for more than half his life, had so much respect for electric fencing that he was reluctant to go anywhere near anything string-like lying on the ground.

This one had the most interesting face. If she were a horse, her coloring would be described as “high white” — white above the knees and hocks on an otherwise dark animal — and attributed to the sabino gene. I don’t know how color genetics works in cattle or what the various color patterns are called. (If you do, please clue me in!)

This one was noticeably smaller, her horns less developed, than the others, so I’m guessing she’s a youngster.

These guys were less interested in us than in something off to the right. I’m still not sure what it was.

By this point, most of the herd was moving in our general direction. They seemed to have no interest in testing the fence, though I did wonder if they might inadvertently lean too hard on it. Clearly Trav and I were a distraction from grazing and snoozing, so we went on our way.

Susanna edits for a living, writes to survive, and has been preoccupied with electoral politics since 2016. She just started a blog about her vintage T-shirt collection. Her other blogs include "From the Seasonally Occupied Territories," about being a year-round resident of Martha's Vineyard, and "Write Through It," about writing, editing, and how to keep going.
View all posts by Susanna J. Sturgis →
This entry was posted in outdoors and tagged cows, farming, livestock, my neighborhood, Sheriff's Meadow Foundation, Travvy, walking, West Tisbury. Bookmark the permalink.