B is for Beach #AtoZChallenge

See here for more about the Blogging A to Z Challenge.

B is for Beach — it’s a no-brainer, right? Martha’s Vineyard is an island. Its whole perimeter is beach of one kind of another, and much of it is the sandy kind that swimmers and  sunbathers love. In summer people come here primarily for the beaches. Vineyarders have figured out plenty of ways to keep them entertained (and part them from their money) at night and when the weather doesn’t cooperate.

Year-rounders know that in summer it’s best to do grocery shopping and run other down-island errands on good beach days. When it’s rainy and/or chilly, the roads and shops of the down-island towns are mobbed with bored summer visitors looking for something to do.

Summer visitors tend to assume that the Vineyard winks out of existence as soon as they leave; hence the perennial question “What do you do in winter?” (Sometimes the first “do” is emphasized, other times the second.)

I knew the Vineyard existed in the winter because I’d been down here a few times with my father, camping out at the family camp, pumping water from the well because the pipes had been drained, drawing close to the fireplace at night. Still, during my first full winter here I was fascinated by snow on the sand, opposites not only attracting but flowing one into the other like it was no big deal.

In the winter of 1985/86 I wrote this poem about walking on South Beach near Quansoo: 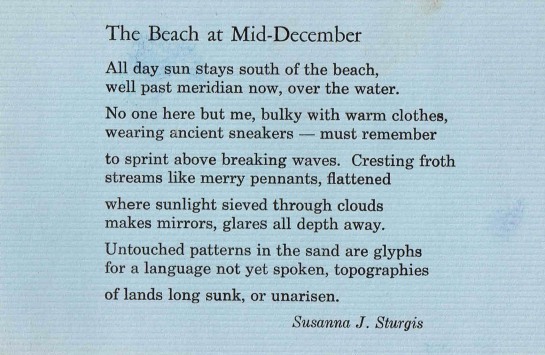 I don’t go to the beach very often these days, and almost never in summer, except for special events, like the annual reading of Frederick Douglass’s Fourth of July speech at the Inkwell. In summer you’re much more likely to find me and Travvy in the woods, where there are far fewer people. 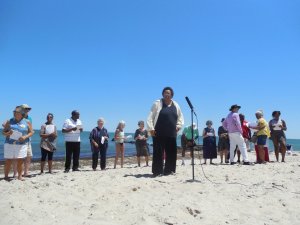 Abigail McGrath and the Frederick Douglass readers at the Inkwell, Oak Bluffs, July 2014

But I can’t help noticing that in both my first novel and the one in progress crucial conversations tend to happen on beaches. The Mud of the Place pivots on a conversation Shannon has with Rainey Silvia while walking on Lambert’s Cove Beach. Mud was shaping up to be a tragedy till Rainey said what she had to say. What she said told Shannon she had an ally, and that changed everything. (Moral of the story: Listen to your characters, even, or maybe especially, the ones you think are just extras.)

In Wolfie, on the day before Shannon and Jackie go to Moshup’s Beach as recounted in “A is for Aquinnah,” they stop at State Beach, which runs next to the road from Edgartown to Oak Bluffs, partly because Jackie, a city girl, has never seen a beach with no people on it. Background: Shannon is an alcoholic with a long-established recovery. Jackie has been sober for five or six years. In their weekend visit they are feeling their way toward making amends to each other.

Your lead, Shannon told herself. Earlier she’d been thinking they were ready to open some closed doors. Out here on the beach there were no doors. Anything could dive-bomb you from anywhere. She took a deep breath. “I had a massive battle when I first got to the second step,” she said. “‘Came to believe that a Power greater than ourselves could restore us to sanity.’”

Jackie glanced at her sidelong with a little smile on her face. “Yeah?” she said.

“Yeah,” said Shannon. “The only greater power I knew was the one that had hold of my ankles and was trying to pull me under. It was a tug-of-war to the death and I was afraid I was losing. Turning it over meant giving up.”

“I thought Step 2 would be easy,” Jackie said after a long pause. “Wasn’t it all about God? I believed in God, right? Then I got that the God I believed in sounded a lot like Pop. I didn’t trust him at all.”

“Ha!” Shannon picked up a flat stone, studied it, and aimed it toward the water. It skipped twice and then sank. “I used to be better at that,” she said. “I never saw what had hold of my ankle. I just felt it pulling and tightening its grip and pulling some more. So my sponsor drove me to the beach. Not this beach — the one at Gay Head, where the clay cliffs are. Major island tourist attraction,” she interrupted herself. “I thought we’d drive up-island tomorrow.”

“So it was windy and gray that day and the surf was smashing on the rocks. Whoosh!” Shannon raised both arms as if she were about to get splashed. “We walked a while, then she touched me on the arm and pointed toward the ocean, which is crash-banging and getting closer and closer to our feet, and said ‘Make it stop.’”

Jackie clapped her hands together. “I love it!” she said.

“Of course I thought she was nuts,” Shannon went on. “But by that point I’d figured out that she was also pretty smart and that if I didn’t humor her when I didn’t get it, sooner or later I was going to look really dumb. Then I got it. In those days I was spending a lot of time on the water, scalloping in the off-season, crewing summers on fishing boats and charters. Every damn time you go out on the water you’re dealing with a power so great you have almost no power at all. And it was restoring me to sanity, I just didn’t realize it because I was drinking so much. Out on the water I was stone cold sober and so were the guys — most of ’em anyway, most of the time. We hardly ever said anything. We didn’t have to — we knew what to do and when and we just did it.”

They had stopped walking. Jackie gazed out over the water for a long time. Was she getting ready to say something? Shannon knew there was a time to push and a time to wait it out. This was one of the latter.

“You’d have to get past Cape Poge first,” Shannon said, grinning and pointing off to the right, where the northernmost tip of Chappaquiddick vanished into the water. “Then, if you didn’t run aground in the Monomoy Wildlife Refuge — it drops down due south from Cape Cod’s elbow — and if the wind and current were right, you might wind up in Nova Scotia.” 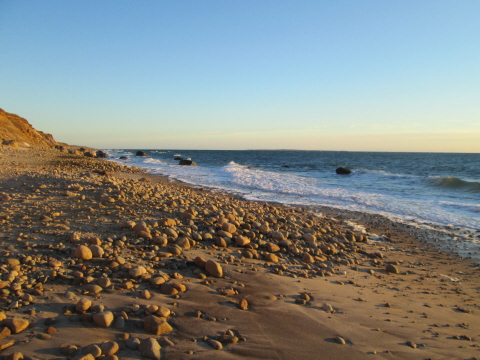 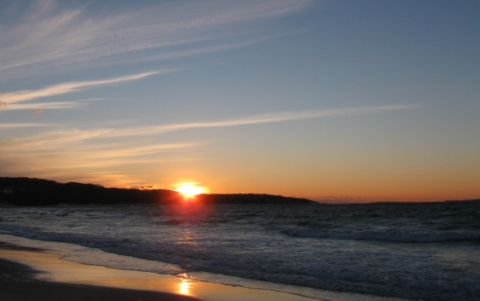 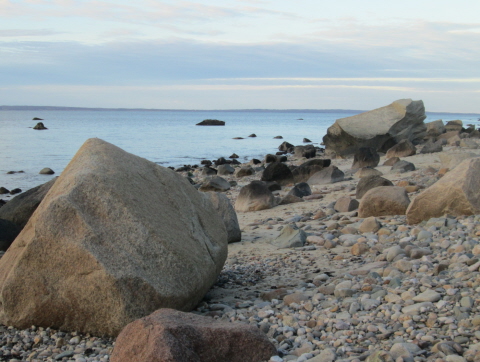 Rocks on the beach at Great Rock Bight, Chilmark

Susanna edits for a living, writes to survive, and has been preoccupied with electoral politics since 2016. She just started a blog about her vintage T-shirt collection. Her other blogs include "From the Seasonally Occupied Territories," about being a year-round resident of Martha's Vineyard, and "Write Through It," about writing, editing, and how to keep going.
View all posts by Susanna J. Sturgis →
This entry was posted in Martha's Vineyard, outdoors, writing and tagged alcoholism, Lambert's Cove Beach, Mud of the Place, poetry, South Beach, State Beach, summer, walking, winter, Wolfie. Bookmark the permalink.

6 Responses to B is for Beach #AtoZChallenge