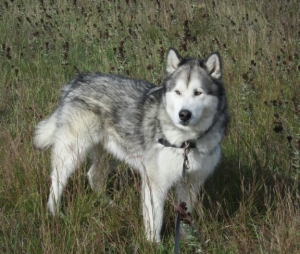 Wolfie is based on Travvy, my Alaskan malamute, but he has a different backstory.

Wolfie, my novel in progress, takes place on Martha’s Vineyard, as did its predecessor, The Mud of the Place. Those who eventually read it may have no acquaintance whatsoever with the island, and those who do don’t live on the same Martha’s Vineyard that my characters do. So from time to time I do a little of what fantasy and science fiction writers call “world-building”: showing readers what they need to know about the world the characters live in.

I’m especially fond of this bit. Shannon, my co-protagonist, has to go to a West Tisbury selectmen’s meeting on account of — you guessed it — a dog. Wolfie, the dog in question (and also the novel’s title character), is suspected of killing chickens and hassling livestock. A few days before the appointed date, she thinks:

Nevertheless, walking into town hall was venturing into a web of histories and connections some of which were obvious and others opaque, and you better know who you were talking to before you said anything stupid. Underneath its pretty beaches and picturesque fields Martha’s Vineyard was a tangle of feuds and grudges. They lay like smoldering embers till a spark or strong wind brought them roaring back to life. At that point a handful of cooler heads would step in to contain the blaze with buckets and garden hoses, and if they were lucky and the wind died down, the fire would do likewise before too many people got scorched.

Until something flared it up again.

No, Travvy has never been busted for killing anything. This is because I don’t let him run loose. I have been to a selectmen’s meeting on his/our behalf, however. See “No Dogs! No No No!” More than four years later, the sign is still up on the tennis court, but Trav and I practice there occasionally when the court isn’t padlocked for the summer. My grudge against Parks & Rec isn’t exactly incendiary. I don’t vote for any of them in town elections, true, but this doesn’t matter because they always run unopposed.

Susanna edits for a living, writes to survive, and has two blogs going on WordPress. "From the Seasonally Occupied Territories" is about being a year-round resident of Martha's Vineyard. "Write Through It" is about writing, editing, and how to keep going. She also manages the blogsite for the Women's Committee of We Stand Together / Estamos Todos Juntos, a civic engagement group on Martha's Vineyard.
View all posts by Susanna J. Sturgis →
This entry was posted in dogs, Martha's Vineyard, writing and tagged fiction, Mud of the Place, psychic map, town government, Travvy, West Tisbury, Wolfie, writing. Bookmark the permalink.

3 Responses to Why We’re Cautious