So last December the West Tisbury Parks and Recreation committee threw up a NO DOGS sign on the new public basketball court near the West Tisbury School. Trav and I had been using it a few mornings a week for short, five- to ten-minute off-leash training sessions. The court had several advantages: it’s within a half mile of where I live, it’s securely fenced and gated, and when we were there — usually before 8 a.m. — there was never anyone playing or practicing basketball.

I went to a Parks & Rec meeting to see if they’d lift the ban on dogs and let Trav and me do our thing there when no one was shooting baskets. No way.

I went back to using the tennis court, which is right next to the basketball court and has all the same advantages. I’d been using it without incident since the fall of 2009; I only started using the basketball court because the tennis court is padlocked in the summer and last summer the newly built basketball court wasn’t. In December, Parks & Rec had only come up with two reasons for NO DOGS that held any water at all: (1) that the court was brand-new (what if my dog pooped on it??), and (2) that if people saw me and Trav training there, pretty soon everybody else would want to do likewise.

Neither reason applied to the tennis court. (1) The tennis court is in crappy shape, and (2) in the nearly three years that I’ve been using it, people have not been queuing up to use it with their dogs. Tennis players aren’t queueing up to use it either, even in the off-season, when the gate is unlocked and no fee is charged. When someone does show up to play tennis, Trav and I are outta there: it is a tennis court, after all, and we can come back anytime.

Well, until yesterday we could come back anytime. Yesterday this sign went up on the tennis court. 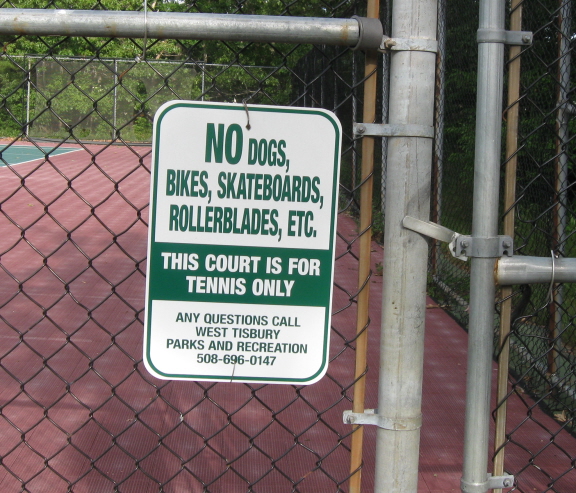 Since I’ve yet to see anyone biking, skateboarding, or rollerblading on the tennis court, and Trav is the only dog I’ve seen there in months, I assume that the sign’s primary purpose is to keep me from training Trav on the tennis court.

Why? Good question. We always make way for tennis players. In nearly three years we haven’t damaged anything: the surface and the nets are deteriorating without anyone’s help. (I do pick up trash that other people leave behind, but since the court is so rarely used, this doesn’t amount to much.) No one has ever questioned my presence there — not to my face, anyway — but I have had plenty of conversations about dogs and dog training with people who’ve stopped to watch us.

It’s a good question for other reasons too. As noted in “Dogged,” which I posted earlier this month, tensions have been running high in town where dogs are concerned, especially about dogs on Lambert’s Cove Beach, dogs killing livestock, and unrestrained dogs in general. Travvy is an Alaskan malamute, a breed noted for its prey drive, and Travvy’s prey drive runs strong. We’ve got free-ranging fowl in my neighborhood, not to mention cats, so when we go out Travvy is either on-leash or attached to the Springer that’s clamped onto my bicycle.

Trav and I compete in Rally obedience. (See “Rally Off-Island” for more about “Rally-O.”) Although I’m very new to dog training and Alaskan malamutes are not noted for their aptitude for obedience, we’ve been having modest success in off-island competition and in Cyber Rally-O, an ingenious Rally venue where you set up a prescribed course, video yourself and your dog doing it, and submit the video for judging. At the level we’re at, all competition is off-leash. You see where I’m going with this? I rent. I don’t have a fenced-in yard. Securely fenced areas and large indoor spaces are very hard to come by on Martha’s Vineyard.

The tennis court was perfect: secure, big enough, usually vacant, and (icing on the cake) close to where I live.

And now it’s no dogs allowed.

Yes, we could work off-leash in an unfenced area. Eighty, 85, maybe even 90 percent of the time Trav would be fine. I, however, would be a nervous wreck. One rustle in the underbrush, a rabbit, squirrel, cat, or skunk, and he’d be gone. His reflexes are much better than mine. And when I’m uneasy, Trav picks up on it and wonders what’s so scary; he becomes hyper-aware of every sound and smell around him.

I want to continue training and competing with my dog. I’m trying to be a responsible dog owner. Parks and Rec is making this very difficult.

And for no good reason. 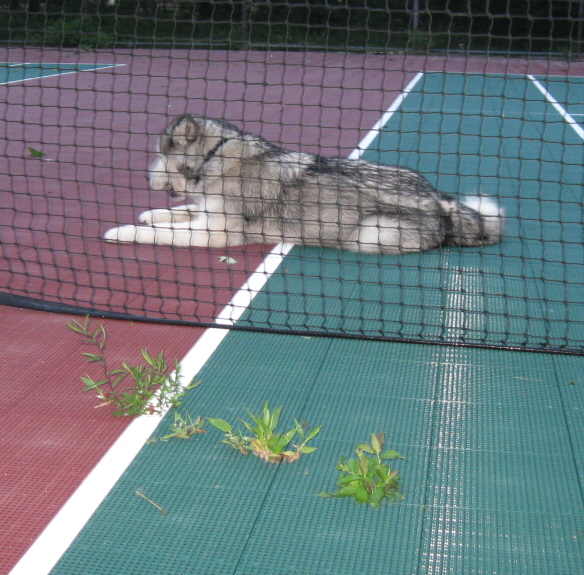 Don’t panic — this was taken before the sign went up.

Susanna edits for a living, writes to survive, and has been preoccupied with electoral politics since 2016. She just started a blog about her vintage T-shirt collection: "The T-Shirt Chronicles." Her other blogs include "From the Seasonally Occupied Territories," about being a year-round resident of Martha's Vineyard, and "Write Through It," about writing, editing, and how to keep going.
View all posts by Susanna J. Sturgis →
This entry was posted in dogs, Martha's Vineyard, public life and tagged dogs, Rally, town government, Travvy, West Tisbury. Bookmark the permalink.