I love birthdays on Facebook. People from all the nooks, crannies, and corners of my life check in with birthday greetings and remind me of all the worlds I’ve wandered through and the amazing people I’ve met. This makes me think of all the amazing people I’ve never met and probably will never meet, which makes me think that the world is probably going to make it after all, even if I sometimes have my doubts.

On my timeline I’ve posted a few photos from way back when, waaa-aa-aaay back when. No one alive today knew me then. Both my parents are dead, my four uncles likewise, and since I’m the oldest of four, my siblings either weren’t born yet or were too young to remember.

I was an only child for 16 months. I don’t remember that either.

Come to think of it, I didn’t know me then either , but at least I have the pictures. 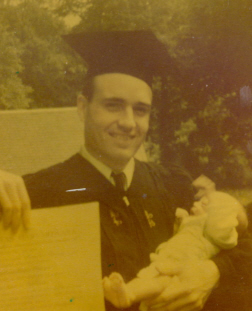 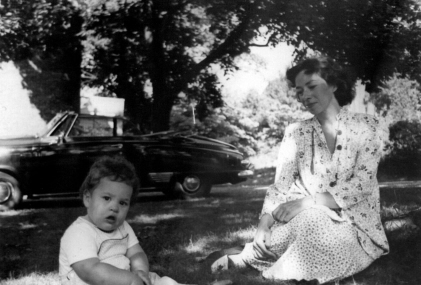 This is me and my mother in 1952. My brother Roger was born in October of that year, but it’s hard to tell how pregnant my mother is. The foliage looks like late spring, so maybe I was about one? That’s my parents’ Studebaker in the background. I’m not sure where the photo was taken. Maybe at my grandmother’s?

And here’s me at about two and a half: 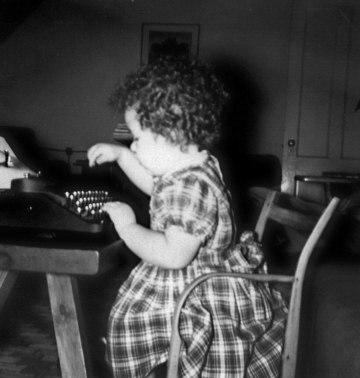 This wouldn’t crack me and everybody else up so much if I’d gone on to become, say, a rocket scientist, a garbage collector, or a math teacher. But I didn’t. I went on to become a writer, editor, and all-around word person. My mother was a crackerjack typist, but I didn’t learn to type till I was an unemployable female college graduate of 25.

What I didn’t know about sexism, the work world, and life in general at that point would fill a book, but that’s not what this blog post is about.

What I’ve been thinking about on my 64th birthday is how lucky I was to be born where I was, in a small town west of Boston that was turning into a suburb. A town where war hadn’t come since about 1776. A town where the rule of law was taken for granted and police officers were friends of the family.

It wasn’t till I moved to Washington, D.C., for my first year of college that I began to realize that most people in the world, and many people in my own country, were not this lucky. 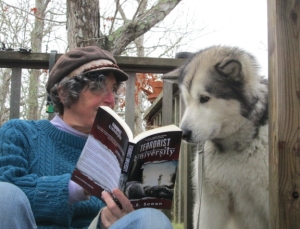 Travvy and I check out the very first print copy of Terrorist University.

Earlier this year I edited a remarkable novel: A. E. Sawan’s Terrorist University. Paul, the protagonist, is an ordinary 10-year-old in a small, ordinary Lebanese town when the civil war arrives in 1975. His family loses everything. They move several times, in flight for their lives. Paul eventually becomes a counter-terrorist operative and has many harrowing adventures and narrow escapes.

Then he finds himself on a flight to Canada, where his middle-aged seatmate asks for a pen to fill out his landing form. But Paul’s pen won’t do, because it writes in black ink. The fellow prefers blue ink. After borrowing a pen from the flight attendant, he proudly shows Paul his landing form, completed in blue ink.

Because at that moment I realized something that I had lost as a child.

I had spent the better part of my life dodging bullets and trying to survive in order to get my revenge. My dilemma was how to survive to the end of the day, because I might get my head blown off at any moment. The Canadian man next to me also had a dilemma: “How do I complete my landing form?”

Black ink or blue ink? A very hard choice to make. I had this big grin on my face. I closed my eyes, put my head back, and started thinking. This Canada place must be so easy to live in; how lucky these people are. In life you can get lucky just by being born in the right place.

Susanna edits for a living, writes to survive, and has been preoccupied with electoral politics since 2016. She just started a blog about her vintage T-shirt collection: "The T-Shirt Chronicles." Her other blogs include "From the Seasonally Occupied Territories," about being a year-round resident of Martha's Vineyard, and "Write Through It," about writing, editing, and how to keep going.
View all posts by Susanna J. Sturgis →
This entry was posted in musing, writing and tagged editing, Facebook, terrorism. Bookmark the permalink.