A Death on the Beach

Tuesday a woman I know was found dead on Lambert’s Cove Beach.

The editor in me wants to change that to knew: Tuesday a woman I knew . . .

The writer says stet. Till the moment Sharon died, the present tense is true. 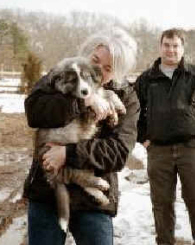 I knew Sharon in my born-again horsegirl days. We were barnmates at both Red Pony Farm and Crow Hollow. Her horse was Liatris, call name Lia, a chestnut Hanoverian mare. Sharon was, as another barnmate frequently said, “a beautiful rider.” Beautiful meaning both excellent and looks great in the saddle. Sharon and Lia rode upper-level dressage. My own preference was trail riding, but I’d drop whatever I was doing to watch them practice side passes and extensions and collections in the indoor at Red Pony or the ring at Crow Hollow.

Sharon also had serious chutzpah. When the Herrmann family’s Lippizan troupe performed on the island in the early 2000s, she managed to wrangle a lesson from Gaby, the troupe’s leader. Afterward she circulated a gorgeous photo of herself on one of the white stallions.

Sharon was less than two years my senior, but she seemed much older, or at least more mature, and not because of her spectacular, prematurely white hair. I was a newbie in the Vineyard horse world. Sharon was one of the most accomplished riders around. I did my own chores and plenty of work exchange to make horsekeeping (barely) affordable. If Sharon ever mucked out a stall, I didn’t see her doing it.

Our relationship got off to a bad start. Shortly after she arrived on the island, my mare, Allie, became lethargic. She ran a high fever. She was my first horse in 30 years, and I was scared to death. Sharon took me aside. My horse should be quarantined, she said, and if her horse got sick she was going to sue me. Allie recovered quickly — what she had was probably shipping fever –no one else got sick, and despite our proximity Sharon and I never became more than nodding acquaintances.

Our paths did cross often during my early horsegirl years, much less often after that, though most of the time we lived in the same town. While I was still on the horsegirl grapevine, I heard bits and pieces of Sharon’s life. She was, it seems, on a rocky road. She eventually sold Lia and, I think, got out of horses. So, eventually, did I. Earlier this winter we did greet each other in passing while shopping at up-island Cronig’s.

When someone you know turns up dead on a beach in your town, well, you think about your connection to that person, however tenuous it was. Foul play is not suspected, say the state police. Accident? Suicide? A little of both? Sharon was the kind of thin that makes one think of anorexia, bulimia, or treatment for life-threatening illness.

Sharon’s ex-husband — he was ex by the time I met her — is a well-known artist and fisherman. He, according to the Martha’s Vineyard Times, is taking charge of the funeral arrangements. But Sharon, again according to the papers, was estranged from her family, had been for at least 20 years, and had “no known relatives,” as far as the state police have been able to discover.

Martha’s Vineyard is not an easy place to live. For a single woman it’s harder, and for a single woman with no family connections it’s close to unimaginable. But I have no trouble imagining why a woman might estrange herself from her family, and none of what I can imagine suggests an easy life.

There but for fortune, think I, and that poem of John Donne’s comes to mind not because it’s a cliché but because it’s true. Any woman’s death diminishes me because I live on this island. The bell keeps tolling, but will it ever wake us up?

Susanna edits for a living, writes to survive, and has been preoccupied with electoral politics since 2016. She just started a blog about her vintage T-shirt collection: "The T-Shirt Chronicles." Her other blogs include "From the Seasonally Occupied Territories," about being a year-round resident of Martha's Vineyard, and "Write Through It," about writing, editing, and how to keep going.
View all posts by Susanna J. Sturgis →
This entry was posted in Martha's Vineyard and tagged Allie, community, Crow Hollow Farm, death, horses, Lambert's Cove Beach. Bookmark the permalink.

2 Responses to A Death on the Beach