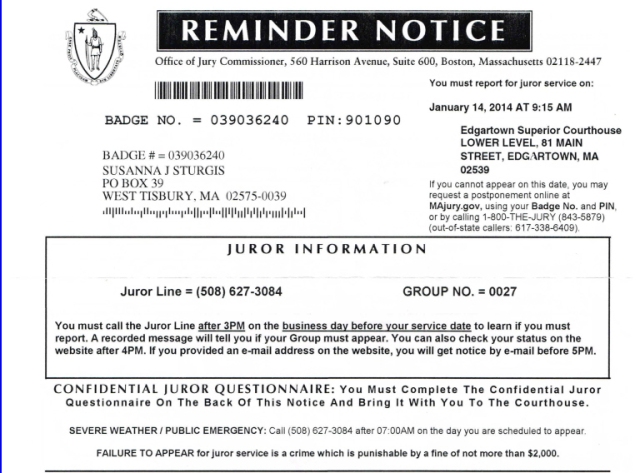 Ordinarily I arrange my day to suit myself. Being summonsed for jury duty means arranging it to suit someone else. Lately I’ve been writing first, then going for a walk with Travvy, then turning on the computer, answering email, and playing on Facebook — after which I get down to (paid) work.

I was due at the courthouse at 9:15. Trav and I usually head out around 9. Something had to give, and since Trav and I need our walk, what gave was the writing. I checked email first, headed out with Trav around 7:40, and got back around 8:30. 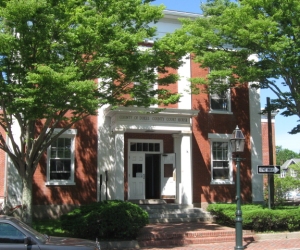 Dukes County courthouse, Main Street, Edgartown. No, I did not take that photo today.

The courthouse is in Edgartown, the county seat of the County of Dukes County. Yes, that is its official name. Jokes about the Department of Redundancy Department are quite common in certain quarters. If you live in West Tisbury, Edgartown is somewhere between the New York state line and Nebraska. Much to my surprise, I got there in 20 minutes and easily found a parking spot on School Street. The sign said One hour parking, violators will be towed, but it being January, I ignored it.

The security people at the door recognized me from my appearances as a mediator. I liked that. Another courthouse staffer checked my juror questionnaire and pointed me toward the jury room. I liked that too. The jury room is around a couple of corners, down a flight of stairs, at the end of a narrow corridor. No way would ever I find it on my own.

Since being summonsed last fall, I’ve mentioned it to a bunch of people. Hell, I’ve bleated it on Facebook. A surprising number have replied with condolences and/or advice on how to get out of it. The number is not surprising because it’s large — it isn’t — but because my friends and acquaintances, though diverse, tend to be a fairly civic-minded lot. They vote. They look askance at people who don’t.

Me, though I’ve been a regular voter for the last few years, this was not always the case. I’ve blogged against compulsory voting. But I didn’t bitch about being called for jury duty, even though because I’m self-employed, no one was going to reimburse me for lost work time if I wound up on a jury. Maybe this is because I have no trouble imagining myself a defendant and wanting to be judged by a jury of my peers.

As on my previous visits to the jury room, Joe Sollitto, clerk of courts, came to brief us prospective jurors and to show us a short film about jury duty. From the start the film made the connection between jury duty and voting. John Adams said they were the most important obligations of a citizen. “Representative government and trial by jury are the heart and lungs of liberty,” he said.

Well, yeah, John, but let’s look at who was allowed to vote in your day, and who wasn’t. How could a woman, or a black person, or a landless person be tried by a jury of his or her peers if women, people of color, and landless people weren’t allowed to vote or serve on juries?

The film addressed this. The first black men were admitted as jurors in Massachusetts in 1860 — progress! — but it wasn’t until 1979 that the Supreme Judicial Court of the commonwealth prohibited the use of peremptory challenges for the purpose of excluding black jurors. Women did not become eligible for jury service in my state until 1950. That’s the year before I was born, people. A while ago, sure, but not exactly ancient history.

In the early 1980s, Massachusetts pioneered the “one day/one trial” system. The idea was to reduce the burden of jury service so that fewer exemptions would be necessary and a more diverse pool of people could serve. It seems to have worked.

As I see it, when you vote, your tally is one of thousands, hundreds of thousands, millions, and that’s all it is: a mark on a ballot. When you’re a juror, you’re one of six or twelve, and what you think and say can make a big difference.

Not long after the film ended, Judge Gregory Williams, first justice of the Edgartown District Court, came down to give us the news. There had been no civil cases on the docket, he said, and only one criminal case. The principals in the criminal case had elected to go with a bench trial, in which the judge alone hears the evidence and decides guilty or not guilty. We jurors, therefore, were excused. We had done our duty and would not be called again for three years and a day.

Joe Sollitto had already told us that if we got a parking ticket during our jury service, his office would take care of it. But, he said, you have to have received it today, January 14, and in Edgartown.

It seems jurors have been known to come in to fix tickets received the previous weekend, and in another town.

Malvina Forester hadn’t got a ticket. She hadn’t been there an hour, and besides — would they really ticket us in January?

Susanna edits for a living, writes to survive, and has two blogs going on WordPress. "From the Seasonally Occupied Territories" is about being a year-round resident of Martha's Vineyard. "Write Through It" is about writing, editing, and how to keep going. She also manages the blogsite for the Women's Committee of We Stand Together / Estamos Todos Juntos, a civic engagement group on Martha's Vineyard.
View all posts by Susanna J. Sturgis →
This entry was posted in Martha's Vineyard, public life and tagged Dukes County, Edgartown, jury duty, voting, winter. Bookmark the permalink.