When the Obamas vacation on Martha’s Vineyard, they don’t stay as long as the Clintons did. This is good, not because I begrudge the president a long vacation but because it gives the press corps less down time to run around gathering “local color.” The black-and-white flowering of that local color was so inadequate that it helped inspire me to write The Mud of the Place.

This visit produced at least one local color piece: “On Martha’s Vineyard, a Stark Look at Income Equality,” in the Washington Post. A friend shared it on Facebook. I tried to read it, started hyperventilating halfway through, and gave up. Then another friend shared it, and another, and another. People were commenting on it. I gobbled up the comments. 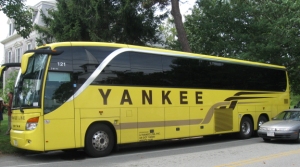 The big yellow press bus that followed the Obamas when they were out and about. The rest of the time it was parked on Music St.

On the third try, I got through the story. I’m glad I did, because two friends of mine, Dan Waters and Michele Jones, were quoted toward the end and they know what they’re talking about. Really, the article isn’t half bad. The reporter touched several important bases and got some good quotes. What he didn’t get is what’s happening on, or to, Martha’s Vineyard.

A big problem, I do believe, is that the reporter — like just about everybody else to the left of Dick Cheney — has been sucked into the 1%/99% frame popularized by Occupy Wall Street. It’s Vineyard working people against the billionaires — you know, the ones with the mega-mansions the size of small towns — and the billionaires are winning.

This frame is as inadequate for Martha’s Vineyard as it is for the rest of the country. Martha’s Vineyard, however, is small enough that it’s possible to glimpse up close and personal the specifics of how and why it’s inadequate. (I blogged about the general limitations of the 1%/99% frame in the fall of 2011. See “Occupy” and “99%”).

To be fair, there’s no way a news story in a daily paper can convey the complexity of island economics, which is what this story was about. An in-depth feature in, say, Rolling Stone or The Atlantic or The New Yorker is required — at least. 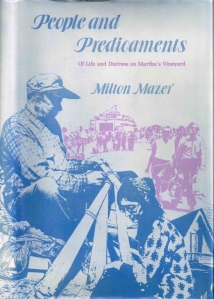 The last time anyone took a serious nonfictional look at Martha’s Vineyard was in the mid-1970s. Milton Mazer’s landmark People and Predicaments was published by Harvard University Press in 1975. Milt Mazer was a psychiatrist and he focused on islanders in trouble, but People and Predicaments is the portrait of a community, its strengths, its weaknesses, and its challenges, painted by a man with the detachment of a trained professional who also had his feet in the mud of this place, to borrow Grace Paley’s line yet again. (Part 1, the first five chapters, is still indispensable to understanding the “character of the island,” now as well as then.)

1975!! That’s 38 years ago. Why has there been no follow-up, nothing remotely comparable, published in the decades since? With all the writers, journalists, and academics who pass through, hang out, and even take up residence here?

Well, I’ve got some theories about that. Some of those writers, journalists, and academics have written with spectacular insight about social, political, and economic structures in other places, so I’m sure they have the experience, intelligence, and theoretical tools to see beneath the surface of Vineyard life the way Milt Mazer did. Why aren’t they doing it? Because in order to write about — or even see — year-round Martha’s Vineyard they’d have to look hard at the ways that they, as summer residents, summer visitors, or people who move in summer circles, might be part of the problem.

But there’s nothing pushing summer residents, summer visitors, and people who move in summer circles to take a closer look at what’s going on here. We aren’t pushing them, we longtime and sometimes lifelong year-round residents, the ones who’ve moved twice a year, worked three jobs in the summer, gone broke in the winter, and been treated as menials by the summer hordes. Why not? Because we’re in a symbiotic relationship with them and, despite all the complaints about “summer people” in general, we like a lot of them personally and don’t want to make anyone — including ourselves — uncomfortable.

Nearly every Vineyard summer brings lectures and symposiums devoted to major social and political issues. These feature high-powered speakers and panelists and often attract SRO audiences. Can you think of one that addressed the local manifestations of those major social and political issues and included longtime year-round Vineyarders in the discussion? Help me out here. I sure can’t.

And you know, it’s hard to get too angry about this, because we’re not having many of those discussions among ourselves either, even in the off-season with no one looking over our shoulders. So I’ve made my peace with that Washington Post story. The story isn’t the problem. The problem is the absence of other stories — our stories.

Anyone else want to try to get a discussion going? I’m feeling a lot like a case study for People and Predicaments, and I didn’t even live here then.

Susanna edits for a living, writes to survive, and has been preoccupied with electoral politics since 2016. She just started a blog about her vintage T-shirt collection: "The T-Shirt Chronicles." Her other blogs include "From the Seasonally Occupied Territories," about being a year-round resident of Martha's Vineyard, and "Write Through It," about writing, editing, and how to keep going.
View all posts by Susanna J. Sturgis →
This entry was posted in Martha's Vineyard, tourism, writing and tagged character of the island, island economics, Milton Mazer, People & Predicaments, President Obama, summer people, year-rounders. Bookmark the permalink.

6 Responses to Our Challenge