In 1993, when I participated in the M.V. Land Bank’s first annual cross-island walk, people invariably asked me what cause it was raising money for. “No cause,” I said. “It’s just about walking with other people and learning more about the island’s trails and conservation properties.” This astonished a lot of people. Walking just for the sake of walking? What a concept!

Walk-athons, jog-athons, run-, jump-, and bike-athons — every damn outdoor activity you can think of has been turned into a fundraiser, and usually the beneficiary is related to some disease. Color me cynical. Yes, some of those mega-nonprofits do good work in raising awareness and funding research, but the result is a crazy quilt of little fiefdoms each cheerleading for its own disease and ignoring the abysmal state of health care in the U.S. and, often, the politically controversial environmental causes for whatever disease they’re trying to cure. I’ve managed to ignore all invitations to contribute to, participate in, or wear a ribbon for any disease-athon.

But a few days ago I was approached via e-mail by one of those disease-related groups: the Tick-Borne Disease Alliance (TBDA). Of course I responded. How could I not? And no, it wasn’t just because I was diagnosed with Lyme disease last month, or because Travvy’s had it, or because the late Rhodry had it (more than once) as well as Rocky Mountain spotted fever and ehrlichiosis in his 13-year life, or even because my father almost died of ehrlichiosis once.

I also liked the “Bite Back” slogan, not least because it reminded me of Emily Pohl-Weary’s wonderful 2004 anthology Girls Who Bite Back. “For a Cure” did make me uneasy because it echoes the slogan of the Susan G. Komen Foundation, which pretty much epitomizes everything that’s wrong with fetishizing a disease in order to raise money. On the other hand, in 2010 Komen was merrily suing nonprofits large and small who dared to use “cure” in their names or slogans, so maybe this is a way of, well, biting back.

Ultimately, though, it’s because you can’t live on Martha’s Vineyard without knowing lots of people who’ve had Lyme and other tick-borne diseases. Some have chronic Lyme — often Lyme that went undiagnosed for years and became resistant to antibiotics and other treatment. They often have to deal not only with their physical limitations but with the skepticism of the medical profession, some members of which don’t believe that chronic Lyme exists. This infuriates me because it reminds me of all the women I’ve known over the years who’ve fought so hard to be taken seriously by doctors. 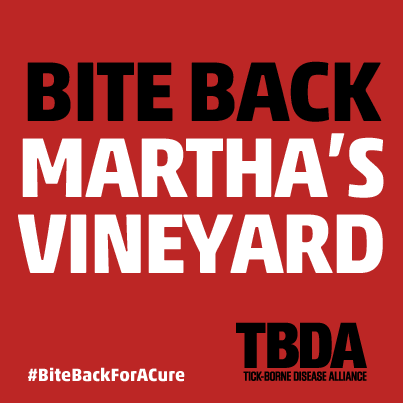 So the TBDA is sponsoring several events on Martha’s Vineyard this Sunday. As it turns out, the Spirituals Choir in which I sing is already scheduled to perform a few songs at the TBDA fundraising dinner Sunday night, 6–9 p.m. at the Grange Hall in West Tisbury. The day’s first event is the Bike Ride for Chronic Lyme. (From the name you can tell they believe chronic Lyme really exists.) Sign-up starts at 9:30 a.m. at the Lyme Center on Panhandle Road (just across the street from the Fair!). It’s a fundraiser: cost is $25 for an individual, $40 for a family.

The ride, a family-friendly eight miles, starts at 11. It goes to the Chilmark Town Hall. Katina I. Makris, author of Out of the Woods: Healing from Lyme Disease and Other Chronic Illness, will be speaking at the nearby Chilmark Community Church from 1 to 3 p.m.

So do check it out, and pass the word.

Susanna edits for a living, writes to survive, and has two blogs going on WordPress. "From the Seasonally Occupied Territories" is about being a year-round resident of Martha's Vineyard. "Write Through It" is about writing, editing, and how to keep going. She also manages the blogsite for the Women's Committee of We Stand Together / Estamos Todos Juntos, a civic engagement group on Martha's Vineyard.
View all posts by Susanna J. Sturgis →
This entry was posted in Martha's Vineyard and tagged Lyme disease, M.V. Land Bank, West Tisbury. Bookmark the permalink.

2 Responses to Bite Back