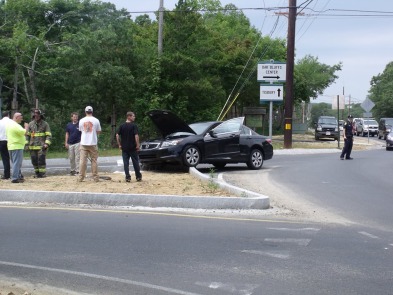 Accident at the roundabout. Photo by James, courtesy of M.V. Patch.

Around midday yesterday a Honda sedan hit the curb at the roundabout hard enough to deploy both airbags and send the driver to the hospital with what initial reports indicate (and we’re hoping) are fairly minor injuries. The Martha’s Vineyard Times reports that according to Emergency Medical Service chief John Rose this was the first accident at the roundabout that required an ambulance response.

I’m inferring from the early details — the driver was young, her father was in the passenger seat — that this may have been a fairly inexperienced driver who got flummoxed by an unfamiliar traffic pattern. Reminds me of the public hearing where an Oak Bluffs elected official got up and wailed that her teenage daughter was afraid to drive the four-way stop. This was the same elected official who said that it was worth spending $1.4 million on the roundabout if it would save the life of someone’s granny who might be killed at the four-way. Never mind that there hadn’t been any serious injuries, never mind fatalities, at the four-way — someday there might be!!!!

Sometimes what passes for logic on Martha’s Vineyard just takes my breath away. And of course it helped that the $1.4 million wasn’t coming out of her town’s budget.

But I digress. I’ve been meaning to blog a little update about the roundabout, or, as I sometimes call it, the blinkabout. I’ve been calling that intersection “the blinker” for a long time and it’s taking a while to get out of the habit.

I am curious about the effect the roundabout is having on the intersections linked to it. I’ve experienced longer backups than in previous summers at both the T intersection of Barnes Road and the Edgartown–West Tisbury Road and (especially) the four-way near the Oak Bluffs fire station. The two ends of the Edgartown–Vineyard Haven Road are such terrible summer bottlenecks that it’s impossible to tell whether this year’s are worse. Sometimes you really do have to rely on statistics gathered over time.

However, the fact that the roundabout works does not erase the fact that the process leading up to it was seriously flawed, and those flaws have not been addressed by much of anybody. Remember how the project was pitched as a matter of safety — then when proponents couldn’t present any evidence that roundabouts improved the safety record of four-way stops, the primary raison d’être became traffic flow? Could we discuss other ways to address traffic flow, like “smart” traffic lights? No, we could not — MassDOT said we didn’t qualify for a traffic light, and MassDOT was managing the project so that was that.

The fight over the roundabout featured some really bad behavior by the Oak Bluffs board of selectmen, and some less-than-stellar behavior by the Martha’s Vineyard Commission. Has any of this been discussed? Not that I know of. A lackadaisical story published in the M.V. Times in early August suggested that everything was hunky-dory and implied that most opponents had come round (so to speak) and learned to love the roundabout. The frame was all too familiar: See? Those contentious Vineyarders who were so afraid of change have discovered it wasn’t so bad after all.

Gag. The roundabout works, but island self-determination lost a big one. Oak Bluffs is still stuck with a crappy town government, and some members of the MVC can’t think their way out of a paper bag. Win-win? I think not.

Susanna edits for a living, writes to survive, and has been preoccupied with electoral politics since 2016. She just started a blog about her vintage T-shirt collection: "The T-Shirt Chronicles." Her other blogs include "From the Seasonally Occupied Territories," about being a year-round resident of Martha's Vineyard, and "Write Through It," about writing, editing, and how to keep going.
View all posts by Susanna J. Sturgis →
This entry was posted in Martha's Vineyard, public life and tagged Oak Bluffs, politics, roundabout, traffic. Bookmark the permalink.