This poem came back to me while I was writing yesterday’s blog. When I lived in D.C., my keys wore holes in the hip pocket of my jeans. On Martha’s Vineyard I carried no keys at all. This might have been the single biggest difference between here and there — along with the not-unrelated ability to walk wherever I wanted, whenever I wanted, without worrying about my personal safety. When I wrote “The Key Sestina,” I’d only been here a few months.

My city apartment needed four keys,
the mailbox a fifth. Two for each of two
jobs, and a tenth for my bicycle chain.
A fine rattle they made, a heavy weight
in my pocket. There was one key whose lock
I’d forgotten. I would not throw it out.

My island friend spends the whole day out,
leaves her door open, needs only the keys
to her car. My new apartment won’t lock
from the inside; I still sleep well. Here too
my ten-speed bike leans against the wall, wait-
ing for me, sheltered from rain, but not chained.

It’s strange at first, leaving padlock and chain
behind, stopping by my friend’s when she’s out
to use her phone. I miss the clanking weight
in my pack, the rattling of all those keys.
Each of them meant commitment, access to
home store, office, women’s center, all locked

against the untrusted. I knew that locks
won’t stop everybody. The severed chain
remains; the bike is gone. In less than two
months my house was robbed three times. We were out
at work, we’d locked the doors, we had our keys;
the burglar had none but he didn’t wait

for us. Perhaps it’s only custom’s weight
that makes a barrier of a door that’s locked.
When my mother drank, I’d hide her car keys,
not knowing she had a duplicate chain.
Once in a muted rage I put them out
in plain sight. Did I want her dead? or to

end my responsibility? These two
options nag twenty years later, their weight
unsettled. I visit, after years out
of New England, her house, whose door is locked
always. My mother from her extra chain
detaches and gives me a front door key.

Says the keeper’s jangling chain, “Just wait.
I can split the world in two: danger
locked out, comfort kept in — or vice versa.” 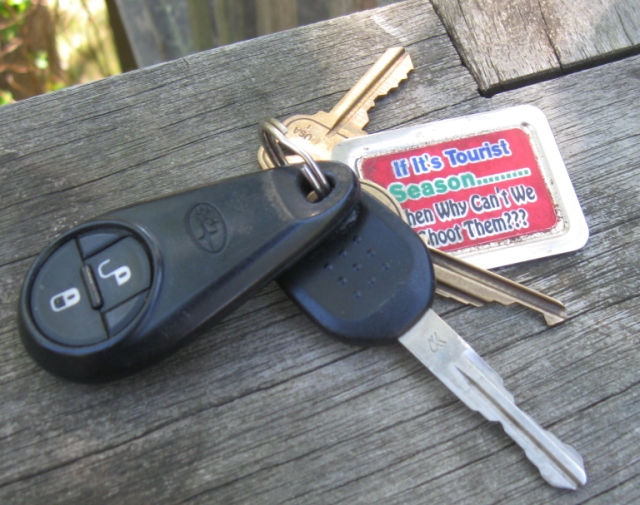 My current keychain. Car key, mailbox key, and I’m not sure what the key in the back is for. It took me a while to get used to the remote lock/unlock gizmo. #1 lesson: Make sure the keys are in your hand when you lock the car.

Susanna edits for a living, writes to survive, and has been preoccupied with electoral politics since 2016. She just started a blog about her vintage T-shirt collection: "The T-Shirt Chronicles." Her other blogs include "From the Seasonally Occupied Territories," about being a year-round resident of Martha's Vineyard, and "Write Through It," about writing, editing, and how to keep going.
View all posts by Susanna J. Sturgis →
This entry was posted in Martha's Vineyard, writing and tagged keys, poetry, Washington DC. Bookmark the permalink.

4 Responses to The Key Sestina