Classic story beginning: “Remember the night we all got drunk and . . .”

Followed by the often hilarious recounting of adventures that made perfect sense at the time but in retrospect look totally off-the-wall.

Way back last spring I decided to run for the Martha’s Vineyard Commission (MVC). I was stone-cold sober at the time. I was stone-cold sober when I collected my signatures, trotted them down to the town clerk’s office for certification, picked them up duly certified, mailed them to the secretary of state’s office, and received back a piece of paper assuring me that I was duly and truly on the ballot.

So a few days ago I started taking those next steps. I want to print a postcard-size handout with my photo on one side and a few words about who I am and why I’m running on the other. Printing such a thing costs money. Spending money, even your own money, gets you into the realm of — eeek! — campaign finance. So I’m now staring at copies of Campaign Finance Guide: Candidates for Municipal Office and Form CPF M 102: Campaign Finance Report — Municipal Form. 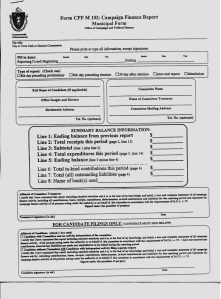 Records to keep. Reports to file. Opaque lingo that takes a while to puzzle out. And frequent reminders that “violations of the law carry serious penalties of fines, imprisonment, or both.”

Political committees aren’t required — except for public employees, who “are prohibited by law from political fundraising, even for their own campaigns.” Should I have a committee? If so, is it enough to say “I dub thee My Committee,” name a treasurer, and file Form CPF M 101? Does the committee need a bank account? Should I have a separate bank account? What a hassle.

In my mind the phrase “campaign finance” is inevitably followed by the word “reform.” It being a presidential election year, millions upon millions of dollars are being poured into various campaigns. Word has it that the race for the U.S. Senate seat in my state is the second-most expensive in the country, with only the race for the Oval Office attracting more millions. So many of those millions are going to pay for lies and distortions, whitewash and evasions . . .

This is no secret. What hadn’t really dawned on me before is how the various attempts to make campaign finance more transparent complicate things for bit players like me, whose campaign budgets are reckoned in the hundreds, not millions, of dollars. And without fixing the mess at the state and national level: the serious players have legal and accounting teams devoted to making the system work for them, because they can’t afford to do otherwise.

On the whole, I’m glad I didn’t know about this before I decided to run for MVC.

Susanna edits for a living, writes to survive, and has been preoccupied with electoral politics since 2016. She just started a blog about her vintage T-shirt collection: "The T-Shirt Chronicles." Her other blogs include "From the Seasonally Occupied Territories," about being a year-round resident of Martha's Vineyard, and "Write Through It," about writing, editing, and how to keep going.
View all posts by Susanna J. Sturgis →
This entry was posted in public life and tagged election 2012, MVC. Bookmark the permalink.

4 Responses to Clueless in Candidateland