Saved by a Desk

I don’t think I’ll ever become the person whose dwelling is so jam-packed with books, piles of newspapers, and other stuff that she has only narrow aisles to move in. For one thing, moving 12 times in 27 years has helped keep the stuff under control. (Thank you, Martha’s Vineyard.)

But I understand how it can happen.

When I was packing to move to my current apartment, I tossed unfiled papers, notebooks, half-used pads of paper, and miscellaneous stuff into three boxes. As this apartment and I approached our fifth anniversary, the three boxes were not only not unpacked, they were now overflowing with stuff and toppling piles of unfiled papers, liberally garnished with dust and dog hair. The smallest box sat on top of the mid-sized one, three of whose corners had split top to bottom.

Every winter I was going to deal with those boxes. Every spring caught me with boxes fuller than they had been in the fall. A little voice started nagging at the back of my head. Season by season it got louder and more insistent. It said things were getting out of control. It said things were getting seriously backed up. The way a pipe backs up when it’s clogged with something that shouldn’t be there.

The backup was weighing my mind down, and I know from experience that this sludginess can slide into depression. On Martha’s Vineyard depression is endemic, which means that no matter how screwed up you are, you can let yourself off the hook by pointing to dozens of people who are much worse off. 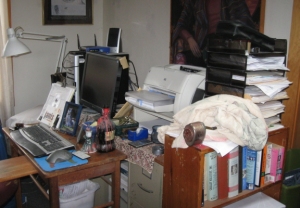 The paper backup had to do, I was sure, with my desk. My basic desk hadn’t changed in almost 30 years. It consisted of two two-drawer file cabinets with a varnished piece of particle board laid over them. Since this surface was too high to type on, a table held my keyboard, mouse, and assorted papers and paraphernalia. A long-ago housemate scrounged this table from the alleys of Washington, D.C., and stabilized its legs with dowels. To open the file drawers, I had to move the table, making sure that this didn’t dislodge papers, paraphernalia, or computer components. I hardly ever opened the file drawers. No wonder papers were collecting in split-sided boxes and plastic file trays. 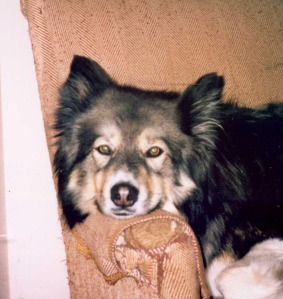 Rhodry and the chair in its better days

The other obstacle to progress was The Chair. Once upon a time, this was a very comfy small easy chair, upholstered in brown-and-white herringbone fabric. A former neighbors’ dog had totally destroyed the seat, but I had this idea that I’d have it reupholstered and be able to sit in it again. More than a dozen years later, I hadn’t managed to come up with the money, and the chair, covered with an old blue sheet, had become a way station for not-quite-dirty clothes, and books, notebooks, and papers that I couldn’t risk losing in the toppling unfiled piles.

The chair had to go. So did the desk. Off-island in mid-December, I browsed the computer desks at Staples, the huge office and computer supplies chain store. Yeah, one of those would work — after my checking account recovered from the purchase of my Nooky, which is what took me to Staples in the first place.

At this point, the nagging voice in the back of my head was supplanted by a deep queasiness in my gut. Rome wasn’t built in a day, and those piles hadn’t grown overnight either. Sorting through and organizing and/or tossing all that stuff was going to take a very long time.

Briefly, very briefly, I considered leaving it all for whoever cleans up after me when I’m dead. They would surely hire a dumpster and shovel all the stuff into it with nary a backward glance. Problem was, my father lived to 86 and my maternal grandmother died a week shy of her 105th birthday. The odds are pretty good that I’ll make 80 at least, and if these piles continue to grow and topple for another 20 years I will indeed be one of those strange people who lives and dies in a rabbit warren of unfiled papers. Perhaps I should hire the dumpster and do the shoveling myself?

Poco a poco se anda mucho, as my Spanish-speaking mother used to say; little by little one makes great progress. I’m not sure she believed it, and I had my own doubts, but as a writer I know that starting is the hardest part and it seemed worth a try.

Here Fate and the Muses, knowing of my proclivity for procrastination, took a hand. About a month ago, a used computer desk was posted to the Facebook group MV Stuff 4 Sale. No chrome and plastic item, this: it was solid wood and very handsome, and the price was what I was willing to pay for something from Staples. Seize the desk! cried Fate and the Muses.

I did. The day it moved in, The Chair and the particle-board desktop moved out. Neighbor David trucked the chair to the Edgartown transfer station. The cost of disposal? A measly 12 bucks.

That corner of my apartment can breathe again. I’ve begun The Sorting — I’ve already emptied one box. The logjam in my head is breaking up. I look at my desk and think that anything is possible. 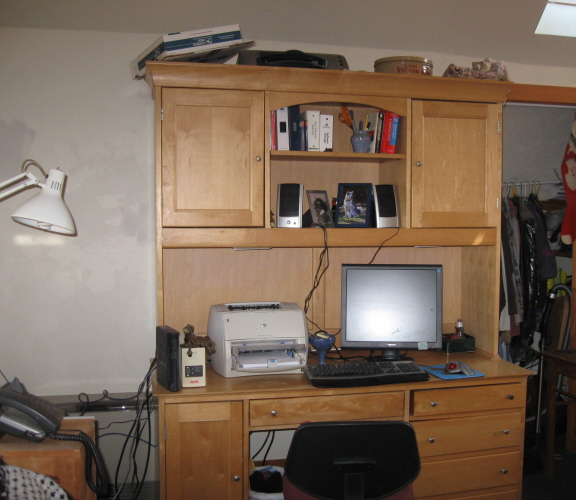 Susanna edits for a living, writes to survive, and has been preoccupied with electoral politics since 2016. She just started a blog about her vintage T-shirt collection: "The T-Shirt Chronicles." Her other blogs include "From the Seasonally Occupied Territories," about being a year-round resident of Martha's Vineyard, and "Write Through It," about writing, editing, and how to keep going.
View all posts by Susanna J. Sturgis →
This entry was posted in home, writing and tagged depression, Facebook, procrastination, Rhodry, stuff, workspace. Bookmark the permalink.

9 Responses to Saved by a Desk