On Martha’s Vineyard, “Islander” is what the academics would call a contested term, which is to say not only that there’s considerable disagreement about what it means but also that some people are willing to fight about it and many more will argue passionately about it. 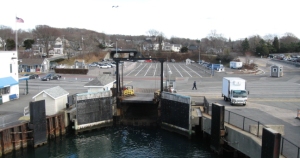 Woods Hole ferry dock. Am I coming or going?

Before I’d lived here more than a couple of years, I learned that “Islander” and “Vineyarder” are not synonymous, though in the last decade or so I’ve heard them used that way more and more often. A Vineyarder is someone who lives here year-round; early on, I heard it said that once you’d survived three winters here, you could call yourself a Vineyarder. An Islander, however, grew up here, and most likely has parents, grandparents, great-grandparents, and more remote ancestors who grew up here to.

Aside: In a Facebook conversation yesterday morning, two people who’ve been here a lot longer than I have said it was the opposite: To be a Vineyarder, you had to have been born here, but Islanders could come from somewhere else. My hunch is that the terms have flipped in the last generation or so. How? Why? Fascinating questions to which I don’t have any answers (yet). The distinction, however, seems to have remained intact: the highest degree of belonging goes to those who were born and grew up here and, ideally, whose ancestors had been around for a while.

Of children born here to parents who hadn’t been here very long, the late Fred Fisher Jr., of Nip N Tuck Farm, used to say, “If a cat crawls into the oven and has kittens, that doesn’t make ’em biscuits.” I’ve heard the same saying attributed to equally crusty farmers in Vermont, New Hampshire, and Maine, but still — point taken. Who belongs and who doesn’t, who’s authentic and who isn’t, is a matter of considerable interest to just about every group that ever existed. “Who’s an Islander?” is about our homegrown version of identity politics.

At the same time, Fred — a quintessential Islander in many people’s eyes — wasn’t one by the strictest definition of the term. He came here from somewhere else. But he put down such deep roots here, raised kids and now has grandkids here, and was so fully integrated into a centuries-old aspect of island life that only the strictest of strict constructionists would dispute the claim that he was an Islander.

Category “Islander,” it would seem, is somewhat permeable, for all but the strictest of the strict constructionists. It is possible for someone not born here to become an Islander. In my early years I was told more than once that you become an Islander when an Islander calls you one. This seemed right to me. It put the naming in the hands of those most qualified to know what an Islander was. “Islander” was a name conferred on a person rather than one she chose for herself.

When I was soliciting blurbs for my Mud of the Place, I contacted mystery writer Cynthia Riggs, who lives in a house that’s been in her family since circa 1750. What she sent me was this: “A sensitive, witty, and tightly plotted portrayal of life on Martha’s Vineyard that only a true Islander could have written.” I bawled when I read it. Yes, Islanders had called me an Islander before, but never in writing, and Cynthia’s island credentials are impeccable.

It occurred to me that Mud might be a book that only a true Islander could have written — but no true Islander would have written it, because a true islander isn’t likely to be that fascinated by the workings of island life, and then there’s that old island dictum that one should only get one’s name in the paper when one is born, when one gets married, and when one dies. In addition, though my body doesn’t stray very far, I’ve been dabbling in other worlds since I moved here: those of fantasy/science fiction, the women’s movement, the lesbian community, Morgan horses, and Alaskan malamutes, to name a few. For the almost 13 years that I’ve been a full-time freelance editor, virtually all my income has come from somewhere else. How could I be an Islander?

But category Islander isn’t monolithic. Growing up as a summer kid on Tisbury Great Pond, I knew John Whiting as an avid Sunfish sailor and the genial commodore of the summer Sunday Sunfish races, which culminated around Labor Day in the Demerara Cup. He was born in Chilmark, his mother was a Mayhew: he was an Islander for sure. It wasn’t till Nora Groce’s Everyone Here Spoke Sign Language: Hereditary Deafness on Martha’s Vineyard was published in 1985 (the year I moved to the Vineyard) that I realized that John Whiting, who wrote the foreword, was also a world-class professor of anthropology.

For some Islanders, it’s a point of pride that they haven’t set foot on the mainland for several years, but others have their feet in two worlds, or pass regularly from one world to another. They’re part of a long-running Vineyard tradition. The island only looks isolated from the mainland, and the rest of the world, if you think entirely in terms of land travel. By sea it’s not isolated at all, and Vineyarders are seafarers. The captains and crews of whalers and merchant ships saw a lot of the world, and they brought the world back with them.

Maybe I’m an Islander after all?

Susanna edits for a living, writes to survive, and has two blogs going on WordPress. "From the Seasonally Occupied Territories" is about being a year-round resident of Martha's Vineyard. "Write Through It" is about writing, editing, and how to keep going. She also manages the blogsite for the Women's Committee of We Stand Together / Estamos Todos Juntos, a civic engagement group on Martha's Vineyard.
View all posts by Susanna J. Sturgis →
This entry was posted in Martha's Vineyard, musing and tagged Cynthia Riggs, Fred Fisher, identity politics, islanders, John M. W. Whiting, Mud of the Place, Vineyarders. Bookmark the permalink.

9 Responses to Who’s an Islander?