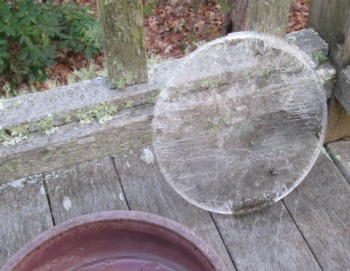 . . . the first ice disk of the season arrived last night. It did indeed set a record for earliest disk, but it wasn’t as much earlier as I’d been thinking: the previous record was held by the winter of 2017–2018, when the first disk appeared on November 11.

This disk was strong enough to survive the unmolding — I photographed it first, just in case it wasn’t — but fragile enough that it’s gone already.

Aside for readers who don’t know what I’m talking about, and may be afraid that I’ve lost what few marbles I had left: In the winter of 2012–2013 I got the bright idea of unmolding the ice in Trav’s outside water dish. I’ve been at it ever since. Ice disks even have a following on Facebook, and people send me images of elaborate ice disk variations that people in other places have come up with. Here’s a brief history of ice disks from 2015 and a tribute to the most ice disks I’ve ever had at one time (15!) from 2018.

In the last week, I swapped the winter insert for the screen in my storm door and performed the Great Seasonal Clothes Switch. Only three days ago I pulled my two storage boxes from the closet (and even blogged about it!!). Day before yesterday I did the deed. Sunday I took my last outdoor shower of the season; two days later my landlord shut the water off. The big question is whether I knew what was coming or whether I single-handedly forced the temperature down below freezing for long enough to create an ice disk.

The cold snap seems to have accelerated the reddening of my Japanese maple. Just a few days ago all I could see was a reddish tinge in the top branches. This morning this was the view from my window: 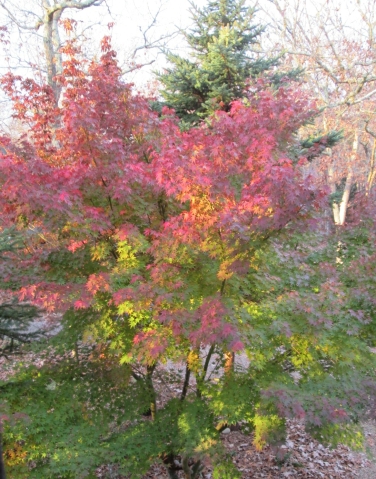 This morning my neighbor noted that there’s a dearth of acorns this year. This is true. We’re surrounded by oak trees a-plenty, and some years acorns pelt the deck so insistently that they interrupt my concentration. (True, it often doesn’t take much.) Not this year. So of course I wondered if this meant we could look forward to a mild winter. A Google search told me that I was not the first to wonder about “scarcity of acorns.” It seems that acorn scarcity was on many minds in 2008, 2011, 2013, and 2015, and it also seems that it’s not a surefire clue to much of anything about the coming winter, except that squirrels and other acorn-dependent wild critters are likely to have a hard time of it.

Susanna edits for a living, writes to survive, and has been preoccupied with electoral politics since 2016. She just started a blog about her vintage T-shirt collection: "The T-Shirt Chronicles." Her other blogs include "From the Seasonally Occupied Territories," about being a year-round resident of Martha's Vineyard, and "Write Through It," about writing, editing, and how to keep going.
View all posts by Susanna J. Sturgis →
This entry was posted in home, outdoors and tagged fall, ice disks, West Tisbury, wildlife, winter. Bookmark the permalink.