Ice disks? you ask. What are ice disks? For an intro to ice disks, see “Ice in August.” The short version is that in January 2012 I discovered that, when unmolded, the ice that formed in Travvy’s outside water dish was rather pretty. It wasn’t till the following fall that I got serious about it. It’s been a major winter amusement of mine ever since.

Here is what 15 ice disks look like. As you can tell, the temperature was rising and indeed by the end of the afternoon the collection was much diminished. Still, 15 is 15. (I did count the broken disk at the far left, but not the remnants in the foreground.)

After a day’s worth of thawing, it looked like this. Some of the 15 did survive, including the one in which one of Travvy’s marrow bones served as a red-pencil holder. 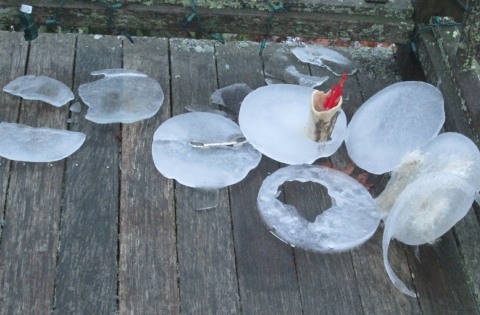 Since that early-winter cold spell, the temperature has ricocheted between cold and the sort of barely above freezing temps more typical of mid-March. As a result the ice disks have been few and ephemeral. We’ve had a few light snowfalls but never enough to do more than dust the ice disks. February is often our coldest, snowiest month, but this February is half over and so far it’s been rather tame.

Nevertheless, here’s a sampling from the post-15 ice disk collection.

One night I had the bright idea of putting a few dog biscuits in the dish before the water froze.

Trav thought this was a great idea. The disk was sturdy enough to survive considerable gnawing and scraping. The dog biscuits weren’t. 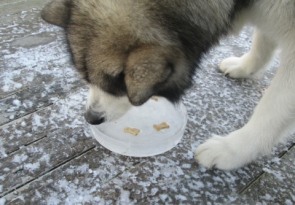 During the long cold spell, I started adding garnish to the water before it froze. The additions survive longer if they aren’t edible. The item on the right that looks like a stainless steel bra is actually a giant tea strainer. 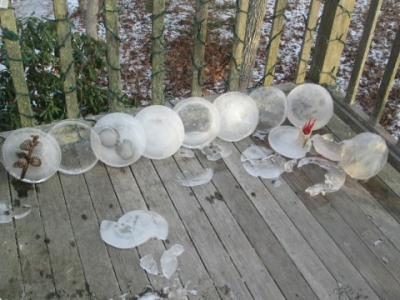 On January 8, there were 10 disks, some of them survivors from the cold spell.

Then warmer weather cleared the deck quite literally.

It wasn’t till the 14th that another disk took its place along the railing.

By the 17th they were a trio. Backlit by winter lights, ice disks take on a new ambiance.

And a dusting of snow adds even more character.

Ice disks have character when they break apart . . .

. . . and when they’re melting. This and the one just above are both from February 4. The broken one above is the one on the right in the photo below, which was taken that morning. By nightfall the one on the left was a mere dampness on the deck. 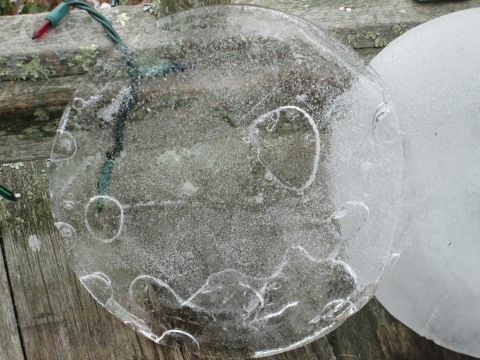 Susanna edits for a living, writes to survive, and has been preoccupied with electoral politics since 2016. She just started a blog about her vintage T-shirt collection: "The T-Shirt Chronicles." Her other blogs include "From the Seasonally Occupied Territories," about being a year-round resident of Martha's Vineyard, and "Write Through It," about writing, editing, and how to keep going.
View all posts by Susanna J. Sturgis →
This entry was posted in home, outdoors and tagged ice disks, winter. Bookmark the permalink.