Tam hunkers down with his new squeaky monkey.

Yesterday I stopped by SBS to pick up a bag of puppy food. At SBS, emporium for pet, horse, garden, and fowl-keeping supplies, dogs are welcome, so Tam came in with me. Of course I had to buy him a new toy. He chewed on it happily en route to our next stop.

Tam is not hard up for toys. I can’t walk around my studio apartment without squeaking on something. He also has four well-gnawed cow hooves. Stepping on these barefoot — they’re sharp! — is a literal pain, but because of Tam’s toe fetish I’ve usually got shoes on these days. (Why so many? Because when they disappear, I get out a fresh one, whereupon the lost one[s] reappear.)

Tam on May 30 with the Green Thing. He figured out PDQ how to stand the thing on one end and make the treats inside fall out.

Most of the toys I bought new or were given to him by friends. He did inherit a few from the late Travvy, but Travvy was tough on toys. Within a day or two, squeakies and stuffies had been disemboweled, leaving stuffing and squeakers all over the floor. The only survivors were a Kong Wobbler, a Kong Wubba (sturdy tug toy that looks sort of like an octopus), two “Genius” toys that Trav lost interest in early on (aka the Green Thing and the Yellow Thing), and an Airdog (which looks like an elongated tennis ball).

Tam figures out how to make Kong give up its treasure. June 6.

Tam is making good use of his inheritance, although he probably doesn’t know who to thank for it. The Green Thing introduced him to the concept that some toys contained treats and that if something rattled (as opposed to squeaked), persistent experimentation would be rewarded. Before long he graduated to the Kong Wobbler, which has only one small keyhole for treats to come out of. He has now figured out gravity — treats only come out when the hole is pointing downward — though he probably won’t be writing a paper on it any time soon. On the other hand . . .

Tam’s favorite toy may be the ingenious ball in the photo just below. It rolls and it squeaks — what’s not to like? Malamutes are notoriously not big on “fetch.” They love to chase anything that moves — including small animals and free-range chickens, which is why they aren’t trustworthy off-leash except in enclosed areas — but they don’t see the logic in bringing an object back just so you can throw it again. If you want it back, why did you throw it away??

This squeaky ball was a hit from day 1. Photo from May 23, Tam’s fourth day on the Vineyard.

They can, however, be persuaded to bring the object close enough to you to be exchanged for a treat. I do a lot of this with Tam because Travvy, for all his virtues, was a hardcore resource-guarder: he didn’t like to give anything up. After much practice, he did learn to negotiate: he would give up something he wanted in return for something he wanted more, like a bite of string cheese. But I remained vigilant to avoid my worst-case scenario: that he would grab a kid’s toy, the kid would try to grab it back, and something bad would happen.

With Tam, so far, so good. He’ll almost always trade something he has for something he wants, and often he’ll just let me have it, but when he’s hyper-excited, the “it’s mine” instinct tends to take over. Caution is advised.

The squeaky ball remains a big favorite, and it’s holding up well. The previously clear exterior is now cloudy, but it still rolls and it still squeaks.

Tam and soccer ball, July 3. At 3 1/2 months he’s beginning to look more like a young dog and less like a puppy.

Soccer balls roll, but they do not squeak. Tam loves them too. We live near the West Tisbury School, where Youth Soccer happens on fall and spring Saturdays and pickup practices and games happen at other times. From time to time, damaged soccer balls wind up in the woods, and a ball that’s too damaged for soccer makes a fine toy for a dog. Those things can be multiply punctured by canine teeth and still roll.

There are two soccer balls in play on the far edge of my neighbors’ lawn. My footwork is improving, but Tam plays good defense and I must kick smart to fake him out. He’ll often chase after a soccer ball with the little squeaky ball in his mouth, and his speed sometimes overtakes his coordination and he winds up somersaulting over the ball.

Tam is already pretty good at amusing himself when he’s not sleeping. This seems to be typical of Alaskan malamutes: they love to play and they love to work, but as long as they get plenty of both they’re also good at chilling. Since I work at home, this is a big plus. The other big plus is that they let me know when it’s time to get up from the computer and do something besides edit, or write, wander around Facebook, or play solitaire. Tam is already pretty good at this.

These two photos were taken two months and four days apart. Eek! Isn’t it amazing how much change can happen right under your nose and you’re barely aware of it?

When I posted the earlier one on Facebook, a couple of people noted that from the back Tam looked rather like a cat. True! I thought immediately of B. Kliban’s wonderful cat cartoon book, in which he observed that a cat is an animal that is frequently mistaken for a meatloaf. (Google B. Kliban cat if you’re not familiar with B. Kliban’s work. It’s wonderful.) 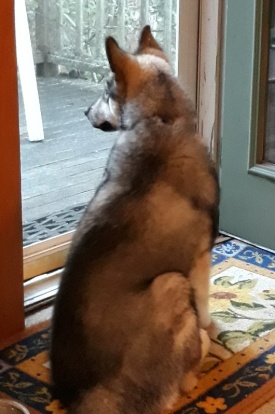 Tam watches avian activity on the deck. They drink from his water dish and sometimes use it as a birdbath. September 3.

Susanna edits for a living, writes to survive, and has been preoccupied with electoral politics since 2016. She just started a blog about her vintage T-shirt collection: "The T-Shirt Chronicles." Her other blogs include "From the Seasonally Occupied Territories," about being a year-round resident of Martha's Vineyard, and "Write Through It," about writing, editing, and how to keep going.
View all posts by Susanna J. Sturgis →
This entry was posted in dogs, home and tagged dog training, dogs, sports, Tam Lin, Travvy, West Tisbury School. Bookmark the permalink.