This report is late because there’s nothing to report except that there’s nothing to report. No sightings in September. This is not unusual. After August, the pickins get very slim in the license plate game. However, since one year I spotted Nebraska in the last week of December, I am not giving up. Next Sunday there’s an Impeach Trump demo at Five Corners, which the entire island passes through at one time or another. You can bet I’ll be watching the license plates go by. 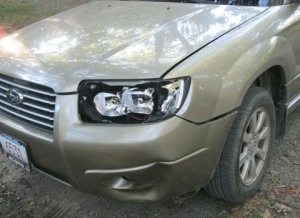 The dent at the bottom is from our 2016 deer run-in. The insurance settlement for that one was $20 (deductible is $500), the damage was strictly cosmetic, so I didn’t get it fixed.

In semi-related news — it relates to cars; is that close enough? — I hit a deer on the way home from a meeting on Friday night, September 27. Or, as is usual in these cases, the deer hit me. Malvina sustained more serious damage than she did in our last deer collision, in October 2016. I suspect the deer sustained worse but I don’t know for sure.

This accident happened on Old County Road, as did the earlier one, about a mile away. According to Wikipedia (did you know Wiki has an entry for “Deer-Vehicle Collisions”?), November is the peak month for deer-vehicle collisions. Other sources note that fall is prime time, and word on the street is that rutting season as something to do with it. Makes sense to me, but surely the earlier and longer dark is also a factor. Deer are harder to see, and they’re easily jacklighted by headlights.

Saturday I reported the accident to my insurance company online, Thursday the estimator came out to assess the damage, and Friday I had the verdict in writing: $1,245 and change, with a $500 deductible. Monday I took car, paperwork, and Tam down to the body shop — and the next available appointment was in the middle of January. They’ll call me if something opens up before then.

Fortunately Malvina is still drivable. The headlight and turn signal still work, though with the cover smashed the headlight doesn’t focus quite the way it should. I haven’t dared lift the hood either, because it’s enough out of alignment that I’m not sure it would close properly again. Naturally I briefly considered trying to find a body shop off-island, but the sheer hassle and expense of getting there and back, and getting around while the work is being done — repair will be a several-day job — squelched that fantasy PDQ.

Susanna edits for a living, writes to survive, and has been preoccupied with electoral politics since 2016. She just started a blog about her vintage T-shirt collection: "The T-Shirt Chronicles." Her other blogs include "From the Seasonally Occupied Territories," about being a year-round resident of Martha's Vineyard, and "Write Through It," about writing, editing, and how to keep going.
View all posts by Susanna J. Sturgis →
This entry was posted in home, license plates and tagged deer, license plates, Malvina Forester, Old County Road. Bookmark the permalink.