I haven’t posted a Tam update in almost three months. Oops. Fortunately I’ve been steadily posting photos and updates on Facebook, and occasionally on Instagram (#tamlingrowsup). Over the next couple of days I’ll be blogging some highlights from our summer. Everyone who sees Tam comments on how big he is. He is — especially if you last saw him in, say, early June. He’s quite well proportioned, so when he’s sitting, standing, or lying still, he might be mistaken for an adult. When he runs and plays, however, he is most definitely a puppy. He’s now four days shy of six months old.

So, here’s Tam in his crate at the beginning of June, at two and a half months old:

When I get up from my chair, I often set my laptop and lap desk on the floor.

My studio apartment is un-puppy-proofable. Papers, notebooks, and books everywhere: on eye-level shelves and on the floor.

Tam has become pretty good with all of this. The trick is to notice when he gets bored and starts looking for trouble. His favorite form of trouble is my socks, which are often found on the boot tray tucked into my shoes. (Travvy also had a sock fetish, so I’m used to this.)

However, since he’s also fascinated by toes, I’ve taken to wearing shoes (and socks) indoors. For a while there he’d try to take my socks off while I was putting them on. This was my cue to start teaching him a down stay. It’s working.

So far Tam has been really good with other dogs, most of whom are smaller than he is — though in a couple of cases this was not true when they first met. When Tam met Zena, the eight-year-old schnoodle next door, she was the big one. Six weeks later, this was no longer the case.

Zena was never comfortable with Travvy, maybe because when she arrived as a very small puppy, he was already full-grown and a little overbearing. With Tam, she didn’t hesitate to put him in his place when he got obnoxious, and he learned when enough was enough. She doesn’t always want to play, but when she does, they’re a hoot to watch. She’s fast, compact, and handy. He’s growing and ungainly and sometimes falls over when trying to make a tight turn.

Ziggy, a terrier mix in the neighborhood, is always up for playing. When he and Tam first met, he played a little rough and Tam sometimes seemed a little overwhelmed, but as Tam’s gotten bigger he gives as good as he gets. 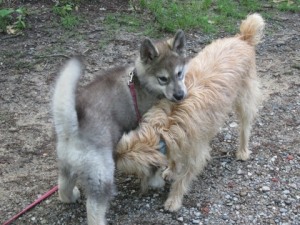 Recently Tam got to play with an adult dog who’s actually a little bigger than he is. They did fine. I’m hoping this continues as Tam moves into adolescence. Travvy learned to be OK with other dogs but he wasn’t all that comfortable with them. When he was Tam’s age, I was heavily involved with horses so he didn’t get nearly as much socialization attention as Tam is getting. Trav taught me so much, and one of the big lessons is that it’s good to start early.

OK, now take another look at the photo of Tam in his crate in early June. Here’s a shot from the same angle in late August. Note that the box and the bar I put in the crate to make it cozier for the little guy have been removed to give the big guy room to stretch out. 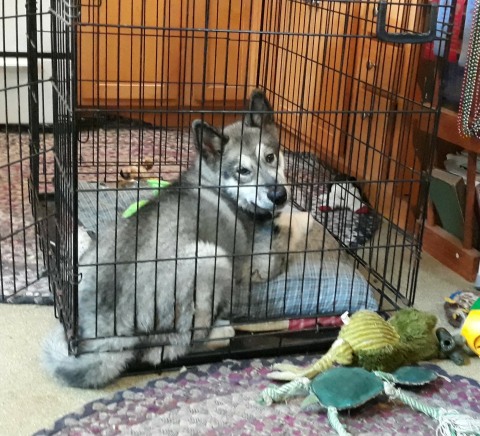 Big puppy in his crate, August 25

Susanna edits for a living, writes to survive, and has been preoccupied with electoral politics since 2016. She just started a blog about her vintage T-shirt collection: "The T-Shirt Chronicles." Her other blogs include "From the Seasonally Occupied Territories," about being a year-round resident of Martha's Vineyard, and "Write Through It," about writing, editing, and how to keep going.
View all posts by Susanna J. Sturgis →
This entry was posted in dogs, home and tagged dog training, dogs, my neighborhood, Tam Lin, Travvy. Bookmark the permalink.