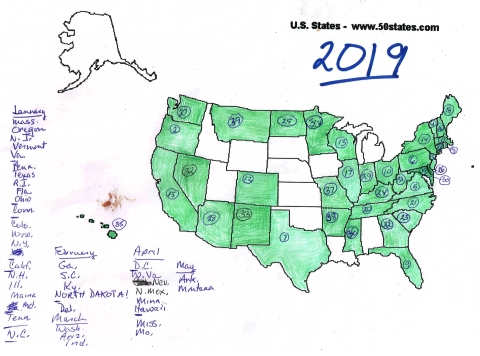 Only two in May, but they were both good ones: Arkansas and Montana.

I took two off-island trips in May, one to Boston for my 50th high school reunion, the other to Cananaigua, New York, to pick up my new puppy, about whom you can learn more here and here (if you haven’t already). Boston to and from wasn’t all that big a deal, but Canandaigua sort of was — and in all that thousand-plus miles of driving I spotted only three plates that weren’t already on my map: Michigan, Iowa, and Utah.

True, I was focused on other things, like navigating at 70–80 mph when my maximum speed on Martha’s Vineyard is more like 50–55 (maximum speed limit here is 45) and, on the way home, paying attention to Tam Lin (who hadn’t got his name yet, and who slept most of the way, but sleeping puppies are adorable and most emphatically a potential distraction), but still — I notice license plates.

Michigan was parked next to me at the Super 8 in Bath, New York, where Tam and I stayed because there were no reasonably priced pet-friendly rooms closer to Canandaigua.

Interestingly enough, today, June 1, I spotted Utah. I spotted two Utahs, although they might have been the same car: I was so focused on the license plate that the only thing I registered about the vehicles was that they were both sedans. Now I am wondering if Iowa and Michigan, the other plates I spotted on the road, will show up on the Vineyard this month. They’re both overdue — you especially, Michigan.

Susanna edits for a living, writes to survive, and has been preoccupied with electoral politics since 2016. She just started a blog about her vintage T-shirt collection: "The T-Shirt Chronicles." Her other blogs include "From the Seasonally Occupied Territories," about being a year-round resident of Martha's Vineyard, and "Write Through It," about writing, editing, and how to keep going.
View all posts by Susanna J. Sturgis →
This entry was posted in license plates and tagged license plates, travel. Bookmark the permalink.

1 Response to May License Plate Report