The late Travvy got me into dog training: when he hit adolescence, I knew I needed help. This opened a whole new world for both of us and gradually turned us into a damn good team. What if we’d started earlier? Could I have avoided or mitigated some of the challenges we had to deal with later, like reactivity and resource guarding?

Once I decided that my next dog was going to be a puppy, I started reading up on early puppy development and training. From the moment I picked Tam Lin up in Canandaigua three weeks (!!) ago, I’ve had “socialization” on the brain: introducing Tam to an array of new experiences.

Tam is turning out to be a pretty brave and resourceful guy. He’s met goats, chickens, and dogs as well as lots of people. He’s been to an abortion rights rally, my town’s caucus to elect delegates to the state Democratic convention, two weekly meetings of my writers’ group, and the monthly meeting of the MV Dems (formally the Democratic Council of Martha’s Vineyard), where I managed to take minutes while paying attention to him when he needed it.

When he could no longer slither under a fallen tree on the path, he gamely scrambled over it. 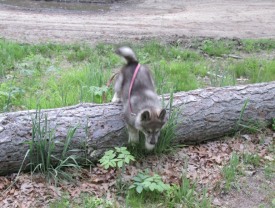 Sometimes going under is not an option. 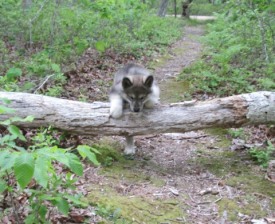 If you can’t go under, go over.

Puppy class started last Tuesday. Our instructor leases space at the Ag Hall, so we meet outside in a temporary enclosure made of snow fencing, zip ties, and metal posts. There were four other teams in the class, and Tam was at almost 11 weeks the youngest of the bunch; the next oldest was fourteen weeks, and the others are now counting their age in months.

Tam did a little fidgeting, and of course I had to put some effort into keeping him engaged, but I couldn’t help comparing this “first class” experience with Travvy’s first Rally Obedience class about 10 years ago. It was held in the indoor arena at Arrowhead Farm, there were five or six other teams in the class — and Trav was so hyper (“over threshold”) in the presence of other dogs he couldn’t even begin to focus on the task at hand unless he was at the opposite end of the arena from everyone else. 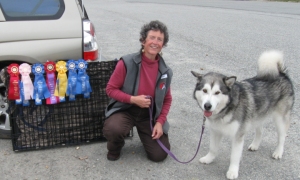 Trav and some of his loot

Many other dogs have had more spectacular careers in Rally and other dog sports, but I’ll nominate Trav any day for the “most improved” award, or the “they said it couldn’t be done” award. He retired ARCHX P-CRO-CH Masasyu’s Fellow Traveller RL3 RA CGC and I’m proud of every Q (qualifying run) and ribbon we earned.

At the same time — well, I’d just as soon not go through those wild early months again, which is why Tam and I are going to puppy class, and why I was discreetly thrilled by Tam’s behavior in his first class.

Trav wound up being a great roommate. I put his crate away for good (except for traveling) when he was three or so. I could leave him home alone for hours, either on the deck (which I called his outdoor crate) or in the apartment, and know for sure that nothing would be out of place when I got home — this from the guy who at one completely destroyed the passenger seat in my Mazda pickup in his desperate effort to get at some chickens on the other side of the window.

Tam reminds me every day that this too took plenty of work because he has no idea what it’s OK to chew on. Toys and marrow bones: fine. Electric cords, computer cables, the clothing piled up on the office chair I never sit in (mainly because it’s occupied by my backup laptop): not so fine. I’ve taken to keeping my shoes on in the apartment because Tam takes naked toes as a source of challenge.

My challenge is keeping one step ahead of Tam and trying to think like a clever puppy who’s trying to figure out how to make the world do what he wants, all the while I’m trying to figure out how to get him to do what I want. He doesn’t want me too far away or out of sight: I run this way or that, and he follows. While he follows, I say “Come” — and we’ve now got the beginning of a “Come” command. He caught on PDQ that he wouldn’t get a treat unless he was sitting; I’ve been teaching “Sit” the same way.

Do dogs in the wild — or even the not-so-wild — have names for each other? I don’t know. For sure they don’t know the names we give them unless we teach them somehow. For a while there I’m pretty sure Tam thought his name was “Come.” Our instructor taught us a handy game to teach puppies their names: Drop a treat on the ground. Puppy will pick it up and look at you to see if there are more coming. At that moment you say the puppy’s name and give him another treat. Thus he comes to associate his name with getting a treat for looking at you.

Lately Tam sometimes looks at me when I say his name, with no “Come” involved, so I think we’re getting there.

A big task now is to get Tam used to my being out of sight, so I don’t have to take him with me everywhere. My bathroom is on the ground floor. Tam does not like it when I go down there in the morning to do my business: the crying and proto-howling is, of course, heart-rending, but my heart is not easily rended. My practice now is to leave him in his crate with his breakfast then disappear. The crying starts when he’s finished eating. 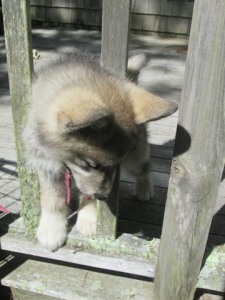 Someday soon you won’t be able to do this, kiddo.

The other day I was hanging laundry while Tam was on the deck. He could see me easily, but that wasn’t enough: much to my surprise, he appeared at my side, trailing his leash — because he can still fit between the deck posts and that’s exactly what he did. Luckily this will not be an option for much longer.

Despite being locked in the crate when I’m out of sight, Tam seems to have pleasant associations with it. I feed him in there. I give him peanut butter bones when he’s in there. He goes in voluntarily. So I’m thinking of leaving him home alone this afternoon so I can go to a forum on the 2020 census; the venue, my own library, doesn’t allow non-service dogs. We’ll see how that goes. 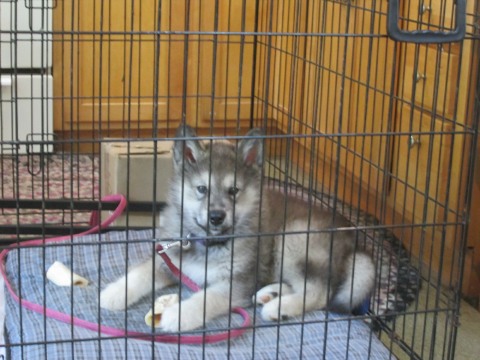 This photo was taken a week ago. Trust me on this: he’s bigger now.

Susanna edits for a living, writes to survive, and has two blogs going on WordPress. "From the Seasonally Occupied Territories" is about being a year-round resident of Martha's Vineyard. "Write Through It" is about writing, editing, and how to keep going. She also manages the blogsite for the Women's Committee of We Stand Together / Estamos Todos Juntos, a civic engagement group on Martha's Vineyard.
View all posts by Susanna J. Sturgis →
This entry was posted in dogs and tagged dog training, dogs, Rally, Tam Lin, Travvy. Bookmark the permalink.