Good dog trainers emphasize the importance of early socialization for young puppies, with a focus on the first three months (13 weeks). Travvy’s early socialization was mostly hit-or-miss, which most likely contributed to the, uh, challenges we had later with reactivity, resource guarding, and a self-protectiveness that made him a less-than-model vet patient.

From attending an intro “How to Raise a RockStar Puppy” workshop given by trainer Karen Ogden and studying Dr. Sophia Yin’s excellent Perfect Puppy in 7 Days: How to Start Your Puppy Off Right I learned that “socialization” is about much more than getting the pup used to other dogs. It involves introducing the pup to all kinds of experiences and sensations, and creating positive associations with them.

Before we even got home, Tam Lin had met a bunch of new people; stayed in a motel; encountered grass, asphalt, carpet, and linoleum; heard traffic and sirens on a busy road; hung out on the ferry; and spent a lot of time riding in the car. I was learning to see all this through puppy eyes (and puppy ears, nose, and mouth).

In his first days on the Vineyard, Tam’s world burst with new possibilities. The immediate neighborhood offered lawn, underbrush, dirt roads, and Zena, the schnoodle next door, who at first was more worried about Tam than Tam was about her. Then they had a get-acquainted breakthrough, and luckily neighbor Willa was on hand with phone to record the occasion.

Zena seems to have decided that Tam is not as scary as she first thought, and not as imposing as Travvy. At one point Tam was being borderline obnoxious. She snapped at him and he backed off: good moves on both their parts. I’m not sure she realizes that before long he’s going to be four times her size. I’m glad she’s reading him the riot act now.

Zena, by the way, is a fetching fool; Tam seems bemused by the game. He’ll chase a rolling ball but when it stops he loses interest. Malamute logic goes something like this: You threw it. I brought it back. Then you threw it again. If you keep throwing it away, why should I bother bringing it back? He does like a good game of tug, however. 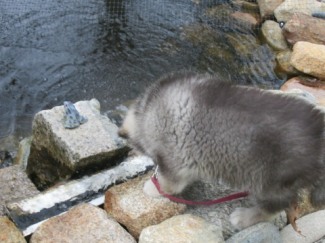 Tam drinks from the waterfall.

I was surprised the first time Tam scrambled over rocks to drink from water bubbling into my neighbors’ little pond. Timid this little guy was not. Now he considers the little waterfall his own private water fountain.

On his second full day on the Vineyard, we stopped by our vet’s to get him weighed: 12.7 pounds. (By a week later, when he had his first full vet appointment, he’d gained two pounds.) 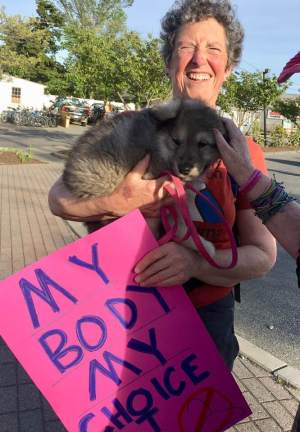 At the May 21 rally for abortion rights. It’s hard to hold a sign and a puppy at the same time. Photo by Nicola Blake.

That afternoon Tam attended his first political event: a rally in support of abortion rights at Five Corners. He seemed unfazed by all the people fussing over him and by the enthusiastic honking of passing motorists.

Thanks to Facebook, half the world knew that I was getting a puppy, and the puppy-to-come already had a fan club. Now we got to work meeting some of his fans in person.

On Wednesday we paid a visit to Cleaveland House, where mystery writer Cynthia Riggs was especially eager to meet the new arrival. Cleaveland House is heaven for puppy socialization: Tam Lin got to meet goats, guinea hens, and ducks, and the event was amply photographed by Cynthia and by Lynn Christoffers. Lynn is a professional photographer whose specialty is cats — she’s the author of Cats of Martha’s Vineyard — but she’s no slouch with dogs either.

Me and Tam Lin. Photo by Lynn Christoffers.

Tam Lin and Lynn Christoffers. Photo by me.

I am blessed to know so many good photographers. Otherwise I would have no photos with both me and my dog in them.

Tam and I do a lot of playing, but we also go for walks. We’re now doing the loop around the neighborhood — Halcyon Way to the path behind the school to the Dr. Fisher Road and home on Pine Hill Road. Bert Fischer, a very fine photographer, lives on that loop. The other day we ran into Bert on the path. This is one of the results. See what I mean about knowing good photographers?

Susanna edits for a living, writes to survive, and has been preoccupied with electoral politics since 2016. She just started a blog about her vintage T-shirt collection: "The T-Shirt Chronicles." Her other blogs include "From the Seasonally Occupied Territories," about being a year-round resident of Martha's Vineyard, and "Write Through It," about writing, editing, and how to keep going.
View all posts by Susanna J. Sturgis →
This entry was posted in dogs, home, outdoors, public life and tagged Cynthia Riggs, dog training, dogs, Lynn Christoffers, politics, Tam Lin. Bookmark the permalink.