Seen from a slightly (only slightly) jaded angle, Martha’s Vineyard is a theme park. We’ve got theme park agriculture, theme park woodlands, theme park arts, theme park progressivism, theme park charity, and so on, all based on things that used to flourish here for real (I think) so the theme parkery is hard to detect. Money often provides the telltale clue: thanks in large part to the high cost of land, activities that used to be more or less self-supporting now require significant and continual infusions of outside cash, from foundations, affluent individuals, and government agencies.

At the Chilmark stop on Dylan Fernandes’s “Listening Tour” last week, an up-island farmer suggested that because of its self-containment, the Vineyard was ideal for “pilot projects.” Could there be a relationship between theme parks and pilot projects? A question worth pondering.

That said, there are definite advantages to living in a theme park. One of them is goats. Last I heard, there were no fewer than three enterprises that would lease you goats to clear out the overgrown bramble patches on your property where humans hesitate to tread, often because the overgrowth often includes out-of-control poison ivy. One of these enterprises is called Scapegoats Goatscaping, which is one of the best business names I’ve ever heard.

In early November a sizable herd (flock?) returned to the small meadow across from the West Tisbury School. Over the next few weeks the herd moved in stages to the large tract of conservation land up the bike path from the meadow, then to an unused pasture at the adjacent horse farm, then back to another part of the conservation land. Since Travvy and I walk this way nearly every day, we spent a lot of time goat watching.

The goats are enclosed by an electric fence. It’s portable and flexible; it also enables one or two goatherders to, well, herd the goats from one place to another. When the goats moved up the bike path, they left some telltale scat behind.

You probably won’t see goats being herded up Old County Road anytime soon, however, because the goatscapers have wheeled conveyances that look like little barns and can be pulled by pickups. How many goats can ride at a time? I’m not sure. When I asked one herder how many goats there were in this lot, he replied, “Probably close to 200.” My guess is that for the up-the-road moves, they have to make more than one trip.

After the goats moved up to Misty Meadows, they had more room to spread out.

And a white goat watches Trav.

We got to watch goats climbing trees. 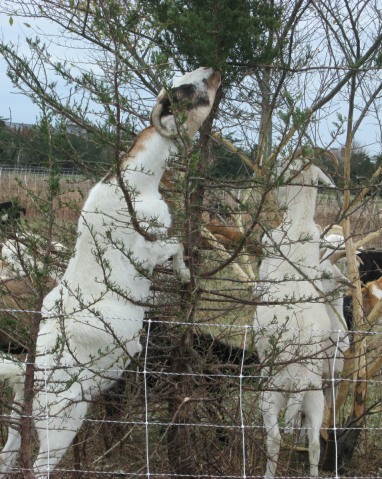 In early December, the goats left for — well, probably not greener pastures, because no pastures are green this time of year. Their last stop in my neighborhood was at the end of the Nat’s Farm field near Old County Road. The path there is narrow and the electric fence ran right along it.

By this point Trav was pretty blasé about the goats as long as they were standing still. Once they started moving — as they often did when they noticed him — it was a whole different story. Malamute imperative: If it runs, chase it. So the goats ran. Trav started bucking and spinning on his short leash at close quarters and, you guessed it, he brushed hard against the electric fence.

Trav was more than shocked: he was offended. It wasn’t his first encounter with an electric fence. He had one when the goats last visited this area in late 2014. Dogs tend to have long memories about these things. The late Rhodry Malamutt was a barn dog for much of his life. Not only did he respect electric fences, he was deeply suspicious of anything that might possibly be electrified. Like a length of baling twine lying across a barn floor.

When Trav gets really excited, his brain isn’t fully engaged and his memory goes AWOL. After this recent encounter, however, he stayed as far from the fence as the scrubby undergrowth would let him.

The goats have moved on, but last I looked, this sign remained behind. Trav, need I say, is leashed whether there are goats around or not.

Susanna edits for a living, writes to survive, and has two blogs going on WordPress. "From the Seasonally Occupied Territories" is about being a year-round resident of Martha's Vineyard. "Write Through It" is about writing, editing, and how to keep going. She also manages the blogsite for the Women's Committee of We Stand Together / Estamos Todos Juntos, a civic engagement group on Martha's Vineyard.
View all posts by Susanna J. Sturgis →
This entry was posted in dogs, Martha's Vineyard, outdoors and tagged character of the island, farming, my neighborhood, Nat's Farm, Rhodry, theme parkery, Travvy, walking. Bookmark the permalink.