E is for Editing #AtoZChallenge

Editing is not a particularly well-paid trade, although it requires considerable aptitude, expertise, and education to do it well. Some freelance editors of my acquaintance regularly rail against the complaints, expectations, and demands of clients and prospective clients, saying things like “They wouldn’t ask a plumber to wait 60 days for payment” and “A lawyer charges four times the hourly rate that I do!”

What it comes down to is value. Worker and client have to agree on the value of the work. If your pipes burst or your sink backs up, the value of the plumber’s work is clear. If you need to draft or even review a complicated contract, you probably need a lawyer.

Lawyers write contracts and laws so that only other lawyers can interpret them, which pretty much guarantees that lawyers will be indispensable for some time to come. Editors are not so lucky. Come to think of it, editors are in the business of making language more intelligible to more people. We may be cutting our own throats.

What Martha’s Vineyard has taught me, and keeps teaching me, is that editing doesn’t become valuable solely because I do it well and enjoy doing it; it becomes valuable because other people are willing to pay me to do it.

On Martha’s Vineyard editing is way down the list of things people need and are willing to pay for. Most people have only the foggiest idea of what an editor does. (Keep in mind that I didn’t either until I got my first editorial job.) Put it this way: Editing is not on the psychic map of most Vineyarders, except writers and people who work for one of the newspapers.

In my first years here most of my editing was done under the guise of typing. I was a pretty good typist, but my forte was never my speed; it was that I corrected spelling, grammar, and punctuation on the fly and made everybody look good.

As a result of a classified ad I was running in the Martha’s Vineyard Times, the Times‘ features editor, whom I’d never met, turned to me at a West Tisbury town meeting and asked if I might be able to fill in for the paper’s editorial typesetter, who was about to go on sick leave. With some trepidation I said yes.

The Times was then located in a building that no longer exists behind Woodland Market. It had once been the home of the Spaghetti Pot restaurant, and the carpet indeed looked as if it had been dyed in spaghetti sauce. The editorial typesetter, who was older then than I am now, returned from leave but had to leave again when her husband got sick, so I got a second several-week temp gig — and maybe a third, I forget. 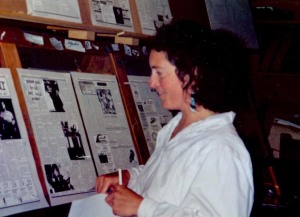 Checking the boards on my last day as M.V. Times features editor, October 1993. Back in the Pleistocene, all copy was cut with Xacto knives and pasted up with wax. By the end of the decade everything was digital.

In any case, the Times realized I could be useful so they hired me as a part-time proofreader who wrote theater reviews and occasional features on the side.

At that time I was also working as a chambermaid at the Lambert’s Cove Inn. When I proofread at the paper, I was looking for typos and literary infelicities; at the inn I was looking for hairs in the shower. The two jobs did have a lot in common.

I eventually became the paper’s second-ever features editor. I loved the job, but it was demanding and I finally burned out. This was at least partly my fault: when you can write, edit, proofread, and type pretty well and you’ve got barely controlled perfectionist tendencies, it’s hard to find anyone who can do any of it as well as you can. After I left, my job was split into two and a half pieces.

By the time I left the Times in October 1993, I was already freelancing as proofreader and copyeditor for a guy running a small book-packaging company, making use of the desktop publishing technology that was just coming into its own.

I made a serious attempt to drum up other editorial business on the Vineyard, but I quickly learned that though plenty of organizations and businesses needed an editor or proofreader, they didn’t know it, weren’t willing to pay for it, or both.

At least 90% of my income was coming from that one book-packaging company, so when the proprietor decided to close up shop, I was back in the job market. I worked the last couple of seasons at the old Webb’s Camping Area (more proofreading, this time outdoors), then persuaded the Martha’s Vineyard Times to create a copy desk position and hire me to fill it.

By the time I left that job, in May 1999, I’d acquired enough publisher clients to freelance full-time, and that’s what I’ve been doing ever since.

There’s more freelance editorial work on the Vineyard now than there used to be — a lot more, but it still doesn’t amount to more than a modest fraction of my modest income. Editing still isn’t on the psychic map of most Vineyarders. This has led to a weird split: thanks to the rise of the internet and more recently social media, nearly all my clients and editorial colleagues live somewhere else. Some people I’ve known or worked with for 20 years but have never met in person.

Most of the people I know on Martha’s Vineyard make things or fix things or grow things, for a living or an avocation or, in some cases, both. I can’t make much of anything that doesn’t involve words, and next to the ability to say, build a shed, rig a boat, wire a house, or make a quilt, that seems pretty feeble. True, I’m grateful that some people value my skills enough to pay me for my time, but still — I get why a good plumber is paid better.

Susanna edits for a living, writes to survive, and has been preoccupied with electoral politics since 2016. She just started a blog about her vintage T-shirt collection: "The T-Shirt Chronicles." Her other blogs include "From the Seasonally Occupied Territories," about being a year-round resident of Martha's Vineyard, and "Write Through It," about writing, editing, and how to keep going.
View all posts by Susanna J. Sturgis →
This entry was posted in Martha's Vineyard, work and tagged editing, island economics, Lambert's Cove Inn, Martha's Vineyard Times, psychic map. Bookmark the permalink.

4 Responses to E is for Editing #AtoZChallenge