D is for Dogs #AtoZChallenge

I grew up with dogs (and cats, and a couple of horses), but as a grownup I never had one of my own, mainly because I was afraid I didn’t know enough to take care of one.

I had the same problem with cars. As I was settling into my first winter rental, a summer resident friend of the family lent me her island car to use whenever her family didn’t need it. The car, a 1980 Subaru, taught me many lessons, starting when I came down the very first morning and discovered it had a flat tire. My first impulse was to leave the car there for the winter and rely on my bike and my feet to get around. But Courtesy Motors was right across the street, and true to their name they did not treat me like an idiot female who couldn’t deal with cars. They lent me an air can and showed me how to use it. I crossed the street, inflated the tire, and drove round to the back of the shop, where they changed the tire and told me where to get the flat fixed. They’ve been my mechanics ever since.

With dogs — well, some people walk because they have a dog, but I attracted dogs because I like to walk. The Vineyard, then as now, has great places to walk: beaches, ancient ways, dirt roads, the state forest, and especially the properties of the M.V. Land Bank, which was established the year after I moved here after long negotiations that I learned about only later. People who worked regular hours or just didn’t have time lent me their dogs to go walking with.

Tigger at Big Sandy, Sunfish in the background, probably summer 1994

One of my foster dogs was Tigger. Tigger’s dad was a malamute, his mom a Samoyed–border collie mix. Not only did Tigger come for walks with me, he sometimes stayed overnight.

Dogs, I learned, were not all that hard to look after. With dogs, as with cars, you did what you had to do, and if you didn’t know how, you learned and/or asked somebody to help.

In the fall of 1994 Tigger’s mom again got pregnant by Tigger’s dad. The first time was planned, this one wasn’t, but no one was unhappy about it. I got in line for a puppy.

On December 17, 1994, I saw the puppies whelped, five boys and three girls, and since I was unemployed at the time, I spent many, many hours watching them grow. The boys all got Star Wars names, as did one of the girls; there being only one female in Star Wars, the other two girls were out of luck. 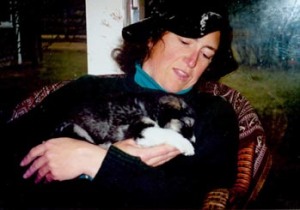 Which one would become my puppy? The pups weren’t quite three weeks old when little Han Solo came toddle-trotting toward me with determination. My heart opened and there was no more question which one was my puppy. I named him Rhodry, after the lead character in Katharine (Kit) Kerr’s Deverry novels.

Rhodry was drop-dead gorgeous, and being half-malamute he also had a sense of humor. For more photos, see his photo gallery on my old website. In true island fashion, Rhodry had four homes in his 13 years. He took it in stride when I added a horse to the family; he was a remarkably good barn dog and a great trail-riding companion, apart from his penchant for rolling in whatever deer carcass he came across.

Pixel in The Mud of the Place is based on Rhodry, though she looks more like his littermate sister Lakota, who was about 25 pounds lighter and female. Mud‘s back-cover photo was taken the day after I learned that Rhodry had cancer. You’d never know it, would you? He died a month later, age 13, on February 26, 2008.

Travvy was born the day after Rhodry died, but I didn’t know that till two months later, when I drove to Canandaigua, New York, to meet a bunch of malamute puppies at Masasyu Alaskan Malamutes kennel. Trav isn’t Rhodry reincarnated. Nowhere close. Rhodry was easy. Travvy was not, especially when he hit adolescence. One afternoon, when I left him alone in my Mazda pickup for less than 10 minutes, he ripped the upholstery and seatbelt to shreds trying to get at some hens outside the truck. I couldn’t trail-ride with him because he’d run off and come back when he felt like it, plus he had a stronger prey drive than Rhodry had and there were more free-range chickens around than there had been when Rhodry was a pup. 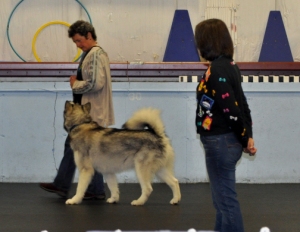 I got out of horses and into dog training. To the total astonishment of everyone who saw Trav in his early obedience classes, we competed successfully in Rally Obedience: he’s now officially ARCHX Masasyu’s Fellow Traveller P-CRO-CH, RL3, R1X, RA, CGC.

Wolfie, my novel in progress, evolved out of another fiction project that sprawled and sprawled without moving forward. Shannon, of Mud of the Place, and Glory, her 11-year-old neighbor and protégée, are driving back from a long walk with Pixel when they see a dog running through the woods. Shannon recognizes it as the mismanaged malamute who has almost certainly been hassling and probably killing chickens in the area. They follow, and save the dog from being shot by the farmer whose sheep he wants for supper.

Yep, Wolfie, the dog, is based on Travvy, but with a more checkered past. Since Trav was born the day after Rhodry died, the two never met, but their fictional alter egos do. As you might guess, Pixel reads Wolfie the riot act, and Wolfie falls in line. 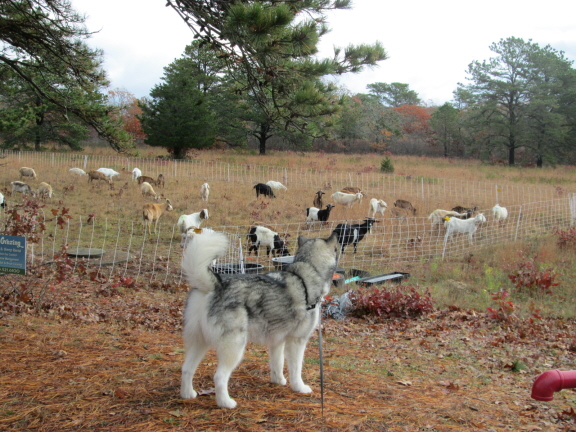 Susanna edits for a living, writes to survive, and has two blogs going on WordPress. "From the Seasonally Occupied Territories" is about being a year-round resident of Martha's Vineyard. "Write Through It" is about writing, editing, and how to keep going. She also manages the blogsite for the Women's Committee of We Stand Together / Estamos Todos Juntos, a civic engagement group on Martha's Vineyard.
View all posts by Susanna J. Sturgis →
This entry was posted in dogs, Martha's Vineyard, writing and tagged Courtesy Motors, dogs, M.V. Land Bank, Mud of the Place, Rally, Rhodry, Travvy, walking, Wolfie. Bookmark the permalink.

5 Responses to D is for Dogs #AtoZChallenge