Dylan Fernandes, state representative elect from the Barnstable Dukes Nantucket district, ran a campaign that emphasized “transparency, accessibility, and community engagement,” so it’s not surprising that a month before he takes office he was already conducting his first “listening tour” of the district. After Falmouth (December 2) and Nantucket (December 5),  the tour made two stops on the Vineyard yesterday: from 3:00 to 4:30 at the Chilmark library and 5:00 to 6:30 at the Oak Bluffs library.

I had a conflict with the later time so I went to the Chilmark gig. Here’s my report. It’s idiosyncratic and opinionated, as you’ve probably come to expect from this blog, but I hope it’s useful, informative, and maybe even interesting. 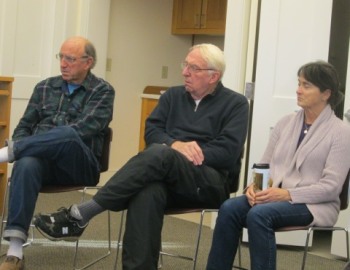 In his introduction, Warren Doty, one of Chilmark’s three selectmen, noted the importance of having a capable, responsive representative in the state house of representatives. (Our state legislature is officially known as the General Court of the Commonwealth of Massachusetts. It comprises a state senate with 40 members and a house of representatives with 160.) Former representative Eric Turkington played a key role in helping the Chilmark library secure state funding for its renovation and expansion project, completed in 2002, which included the program room in which we were meeting. His successor and Dylan’s predecessor, Tim Madden, was similarly instrumental in securing state money after fire destroyed part of the Menemsha dock in 2010.

At the beginning of his own introductory remarks, Dylan acknowledged that in following the widely respected Turkington and Madden he had “big shoes to fill.” Accessibility is among his top priorities. He plans to hold regular office hours on the Vineyard — at least once a month to start with, and in a coffee shop or comparable location, where constituents may feel more welcome than in a formal office setting.

A digital newsletter is in the works, to include news from the state house and around the district as well as ways for citizens to get involved on particular issues. Noting the importance of “going where the people are,” Dylan also intends to make use of social media.

Population-wise, Barnstable Dukes Nantucket is the same size as other districts, comprising about 40,000 people, but logistically? A representative from one of the geographically larger districts in the western part of the state can travel from one end to the other in about 45 minutes, Dylan noted. If Cuttyhunk is included, it takes two days to cover all of Barnstable Dukes Nantucket. Digital media cross the water a lot faster than boats. Dylan’s campaign made effective use of online communication, and I look forward to seeing this expand to include constituents across the district.

Though he hasn’t officially started work yet, Dylan’s been busy. One particularly important task has been the hiring of staff. My understanding is that ordinarily representatives get one staffer, but that previous reps from our district have also had a part-time legislative liaison on Martha’s Vineyard. This is at the discretion of the house leadership. Dylan said he’d already received résumés from more than 50 qualified individuals.

Committee assignments are also made by the house leadership. Some committees are specific to one chamber, either the house or the senate; the joint committees include members from both. Noting that freshman legislators generally get one or sometimes two of the assignments they request, Dylan said that his requests included committees dealing with the environment, addiction, and housing — all issues that were top priorities for his campaign.

Most of the meeting was devoted to questions from the audience. I was disappointed that of the 38 people in attendance, at least two-thirds were town or county officials rather than unaffiliated citizens (like me). However, the upside of this is that the questions and comments were well informed by the questioners’ experience and expertise. The session turned out to be a valuable short course in issues of concern to Vineyarders, which is exactly what our state rep elect was looking for. I do wish more of my fellow citizens had been there to hear it.

Some of the questions were regional or statewide, like those dealing with the implementation of marijuana legalization, which passed as a referendum on the November ballot, and with the decommissioning of the Pilgrim Nuclear Power Station in Plymouth, which has been controversial almost since it opened in the early 1970s. (For a short history, see “Pilgrim’s Plight” from the Cape Cod Times.)

Chilmark resident Nan Doty, who while on jury duty couldn’t help noticing  the poor physical conditions at the county courthouse.

Others were Vineyard-specific, like the physical condition of the county courthouse (which, like the conditions at the county jail, came up in the recent race to replace the retiring county sheriff) and the challenge of getting the state Department of Transportation to deal with a particularly dangerous stretch of road in West Tisbury.

Still others were a bit of both: how statewide regulations and policies play out differently in the Cape & Islands region than they do in the rest of the state. One example was the argument that statewide requirements for Title V septic systems aren’t suitable for Vineyard geological conditions and may be allowing pollution of coastal ponds. Another was that local initiatives to deal with our acute affordable housing crisis may be stymied by statewide real-estate interests.

Disparities exist even within the region: funds earmarked for the “Cape & Islands” tend to stay on the Cape because it has the larger population — but thanks to the challenges of getting around the region, services and programs on the Cape are difficult for Vineyarders and Nantucketers to access.

I was very, very impressed by our new representative’s ability to respond clearly and thoughtfully to all these questions.

Asked about how we can lobby effectively, Dylan emphasized the importance of personal contact. “Legislators are people,” he said. “They’re affected by personal stories.” He sees part of his job as helping constituents reach the right person or agency that can deal with their concerns. As a former staffer in the office of state attorney general Maura Healey, he already knows his way around Beacon Hill, but as a freshman legislator he’ll be expanding his contacts both there and here among his constituents, all in the interest of connecting people who have stories to tell with the people who need to hear them.

Susanna edits for a living, writes to survive, and has been preoccupied with electoral politics since 2016. She just started a blog about her vintage T-shirt collection: "The T-Shirt Chronicles." Her other blogs include "From the Seasonally Occupied Territories," about being a year-round resident of Martha's Vineyard, and "Write Through It," about writing, editing, and how to keep going.
View all posts by Susanna J. Sturgis →
This entry was posted in public life and tagged Chilmark, Dylan Fernandes, election 2016, politics, town government, West Tisbury. Bookmark the permalink.