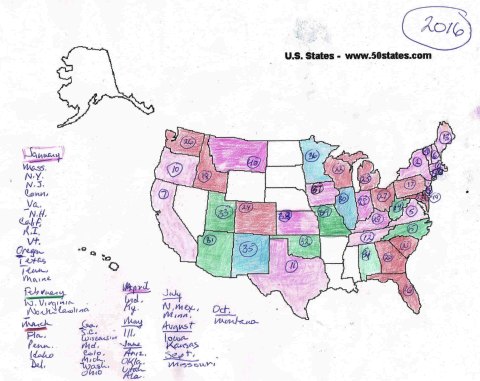 I thought about titling this “Nothing to See Here, Folks” but every license-plate-related post in this blog so far has been titled “[MONTH] License Plate Report” and I am nothing if not conservative.

Some of my friends do not believe that I am conservative in any way, but that is probably because they confuse “conservative” with “Republican.” Republican I am not and probably could never have been, not unless I lived in the decades between the Lincoln administration and that of Teddy Roosevelt. Had I lived then, I wouldn’t have been allowed to vote. That being the case, I like to think I would have followed the lead of Susan B. Anthony, Elizabeth Cady Stanton, and others, and eventually fallen in with Alice Paul and the National Women’s Party.

But I digress. I conserve, therefore I’m a conservative. I wear things till they fall apart. I hate throwing things out. If I didn’t live in a studio apartment and if I hadn’t moved 12 times in the last 30+ years, I might be drowning in stuff, most especially books. Conservatives are unlikely to throw the baby out with the bathwater. ’Nuff said.

So in the wake of the disastrous, ridiculous, I-hope-not-apocalyptic presidential election (has almost a whole month passed since then? Yikes), I can’t help noticing that last month and every month most of the states still blank on my map are those that voted for Trump. Over the years I’ve surmised that the factors influencing the appearance of a state’s license plate on Martha’s Vineyard include its population, its per-capita income, and its distance from Massachusetts. These factors also seem to correlate with a state’s penchant for voting Republican, especially if one substitutes “distance from either coast” for “distance from Massachusetts.”

Quite a few people on Martha’s Vineyard voted for Trump. I know some of them in person and I know more of them through Facebook. Even more of my Vineyard friends are astonished that anyone on this blue island in a blue state voted for Trump.

If I were more easily astonished, I would be astonished by their astonishment. In the state presidential primary last March, Vineyard Dems (i.e., those voting in the Democratic primary — Massachusetts is an open-primary state) went decisively for Bernie Sanders and Vineyard Republicans went for Trump. As I blogged back then, in “Post-Primary Day,” Sanders supporters and Trump supporters had a few things in common, and the similarities between the two campaigns became more evident in the drive toward the party conventions and beyond.

But I digress again. Back to license plates. It’s dawned on me that if we could get an exchange program going between Martha’s Vineyard and all those Trump-voting states in the nation’s heartland, we all might get to know each other better one-on-one and stop thinking of each other as part of a faceless conglomerate labeled liberal or conservative, Democrat or Republican.

More to the point, if enough of those people from the nation’s heartland brought their cars, I might finally finish a calendar year with all 50 states and the District of Columbia colored in. Maybe I could get the Steamship Authority to offer free passage to anyone from a state I haven’t spotted yet.

Susanna edits for a living, writes to survive, and has been preoccupied with electoral politics since 2016. She just started a blog about her vintage T-shirt collection: "The T-Shirt Chronicles." Her other blogs include "From the Seasonally Occupied Territories," about being a year-round resident of Martha's Vineyard, and "Write Through It," about writing, editing, and how to keep going.
View all posts by Susanna J. Sturgis →
This entry was posted in license plates, public life and tagged Facebook, feminism, politics. Bookmark the permalink.