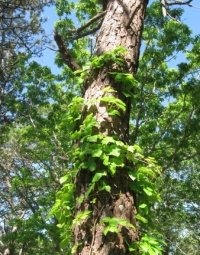 Every year early fall brings glorious color to Martha’s Vineyard, and every fall a highlight of my daily walks with Travvy is the poison ivy tree. Sturdy vines have grown up the trunk of this oak, embedding themselves in the bark like parts of the tree. They leaf out in mid-spring, the green darkens as summer approaches, and then in early October they go wild with color. 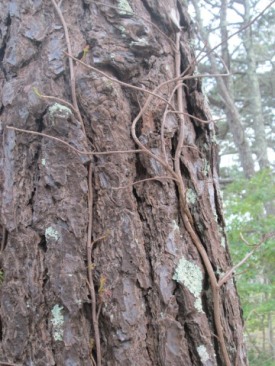 Through April this year, spring seemed to be bursting out in some places and holding its breath in others. At first I wasn’t surprised to see no new leaves on the poison ivy tree. By the beginning of May, though, I started to wonder: Had someone applied weed-killer to the tree? Unlikely, I decided. The property is owned by a conservation group not likely to go wild with chemical weed-killers.

Still, though the woody vines were as tenacious as ever, no leaves appeared on them.

Some poking around in the rough grass at the foot of the tree solved the mystery of the leafless vines. The vines had been cut near the root. 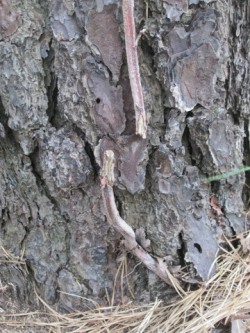 Yes, I know that poison ivy is a weed, and not a friendly one. I’ve been on first-name terms with calamine lotion and its various equivalents since I was a kid, and I’ve got a bottle of Tecnu in the medicine cabinet in case I get exposed again. The poison ivy vines probably aren’t doing their host any good either, though the oak seems to be doing fine. Maybe there’s enough rain, enough sun, enough nutrients in the soil to sustain them both.

Next fall would be a little less bright without the glorious color of the poison ivy tree.

A few days later, as I passed by the tree, some color caught my eye. Wonder of wonders, a young vine was slithering up the tree, and it was leafing out. 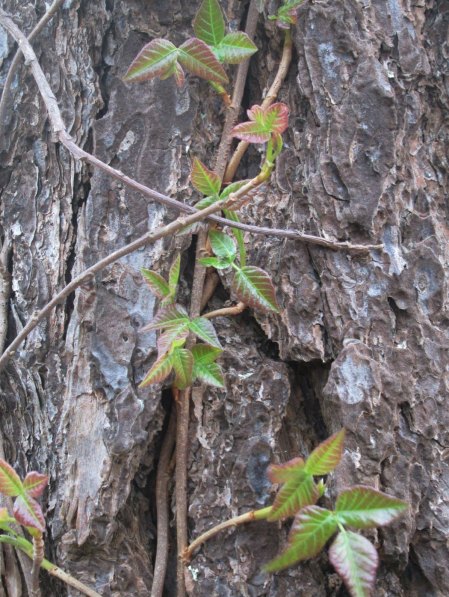 Here’s Janiva Magness singing the song I stole my epigraph from.

Susanna edits for a living, writes to survive, and has been preoccupied with electoral politics since 2016. She just started a blog about her vintage T-shirt collection: "The T-Shirt Chronicles." Her other blogs include "From the Seasonally Occupied Territories," about being a year-round resident of Martha's Vineyard, and "Write Through It," about writing, editing, and how to keep going.
View all posts by Susanna J. Sturgis →
This entry was posted in outdoors and tagged my neighborhood, spring, walking, West Tisbury. Bookmark the permalink.