In the midst of what has to be hands-down the most bizarre presidential election campaign of my lifetime, I’ve had a “compare and contrast” track running in my head: How are national and regional politics like and unlike politics on Martha’s Vineyard?

Gathering reasonably reliable information about the presidential candidates is so challlenging that I sometimes think the phrase “informed voter” is an oxymoron. If the creature still exists, it should be put on the Endangered Species list before it’s too late and members interviewed for the secrets of their survival. The most conscientious among us do our best, but if we’ve got jobs, families, and/or other commitments, “our best” generally means taking a leap to one side or the other based on insufficient information.

Shortly before the Massachusetts primary, I blogged “My Vote in the Balance,” about how I’d come to support Hillary Clinton. I support Clinton even more strongly now than I did then. I’ve even donated to her campaign. (My Woman Card is in the mail.) But this is not unusual. Once one’s made the leap, the universe generally conspires to affirm the wisdom of one’s choice.

But I digress. On the Vineyard, as in many other localities, one is not swamped with information. Except in very rare instances, the national and regional media take no interest in local races. The local media do, of course, but both the Vineyard Gazette and the Martha’s Vineyard Times are weeklies, and local races only become a news priority a week or so before the election.

There is little money in local politics. If a candidate’s campaign expenses run into four digits, that’s an expensive race. A low-four-digit campaign might produce bumper stickers, lawn signs, a brochure, a poster, and a couple of ads in both papers. A media blitz is not in the budget.

However, if one’s lived on the Vineyard a few years, the chances are excellent that one is only one or two degrees of separation from anyone running for office. This means that one has other sources of information. At the top of the list are personal experience and the grapevine. True to form, I was alerted to the race for Dukes County sheriff by the appearance in the neighborhood of a bumper sticker supporting one candidate and a PM (private message) from a Facebook friend that she was managing the campaign of the other.

Although I’m not and never have been a registered Democrat, I am on the mailing list of the M.V. Democrats, which is how I learned that both Democratic candidates for sheriff would be participating in a Q&A session at the Howes House in West Tisbury (home of the Up-Island Council on Aging). This took place last Saturday morning. I was there.

Since this was essentially an MV Dems regular meeting and advance PR was minimal, I did not expect a crowd. Still, the turnout was less than I expected. Probably two-thirds of the approximately 25 people present were either M.V. Dems officials or affiliated with one candidate or the other. Still, they also included the current sheriff, who is retiring; the current register of deeds, who is also retiring, and one candidate to succeed her; a West Tisbury selectman; and a county commissioner.

Falmouth resident Dylan Fernandes crossed Vineyard Sound to promote his candidacy for state representative. He’s acquired considerable political experience in his 26 years and is allied with our senior senator, Elizabeth Warren — a big plus with me. If you’re in the district, check out his website. He looks good.

Local officials and candidates, in other words, are accessible to the citizenry in ways that their regional and national counterparts are not. Whether the citizenry takes advantage of that accessibility is a whole other question. 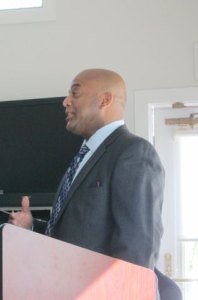 So I heard Marc Rivers and Robert Ogden, the candidates for sheriff, make brief statements and then answer questions prepared in advance by the MV Dems. The questions were less than impressive; those asked later by the audience did a better job of illuminating both the sheriff’s job, each candidate’s qualifications for it, and the major challenges facing the Sheriff’s Department at this time.

I did not walk out of there knowing who I’m going to vote for in September’s Democratic primary. (I’m told there’s also a Republican running. Since the Republicans I know personally are no more or less intelligent than the Democrats, I’ll pay attention to him too.) I couldn’t help noticing that one candidate was far slicker than the other — that the other wouldn’t last five minutes if all we had to go on was media presentation.

Fortunately, I have many ways to inform myself, and I intend to take advantage of them in the coming months. I’ll be able to talk with people who’ve worked with one or both candidates, and people who are more closely connected to law enforcement and/or youth activities than I am. I’ll pay close attention to who my better-informed and better-connected friends are supporting, and why. Since the outgoing sheriff, Mike McCormack, is supporting Mr. Ogden, I’ll especially be listening for people’s takes on how the current administration has been doing: is it on a good course, or is it time for a change?

By September I expect I’ll have a good deal more first- and second-hand information about the sheriff’s candidates than I could possibly gather about any presidential candidate. Deciding who to vote for still involves a leap of faith, though, even for a reasonably well-informed voter.

Susanna edits for a living, writes to survive, and has two blogs going on WordPress. "From the Seasonally Occupied Territories" is about being a year-round resident of Martha's Vineyard. "Write Through It" is about writing, editing, and how to keep going. She also manages the blogsite for the Women's Committee of We Stand Together / Estamos Todos Juntos, a civic engagement group on Martha's Vineyard.
View all posts by Susanna J. Sturgis →
This entry was posted in Martha's Vineyard, public life and tagged community, Dukes County, election 2016, Elizabeth Warren, Facebook, my neighborhood, politics. Bookmark the permalink.