Late May on the Line

Yesterday I asked someone if Memorial Day really was this weekend. It really was, or is, or is soon to be. Spring has been touch-and-go, catch-me-if-you-can this year, but being caught by surprise by Memorial Day weekend is like being drenched by a big wave when you’re facing in the opposite direction

I’m now facing in the right direction. I’m wearing shorts and a T-shirt — a vintage one, gold on blue, from Moonstone Bookcellars, the D.C. bookstore where I bought most of my fantasy and science fiction in the 1970s. It’s one of several T-shirts in my collection from bookstores that no longer exist.

Not only that, I’ve finally begun the Great Seasonal Clothes Swap. The swap is the outward and visible sign of my faith that I will be living mostly in shorts, T-shirts, and tank tops for the next few months. Jeans, longjohns, gloves, and hats come out of the drawers, turtle necks and flannel shirts out of the closet. Shorts, tank tops, and a selection of presentable shirts, skirts, and pants in summer-weight fabrics come out of two big plastic boxes. My bed serves as the transfer station. Travvy helps. 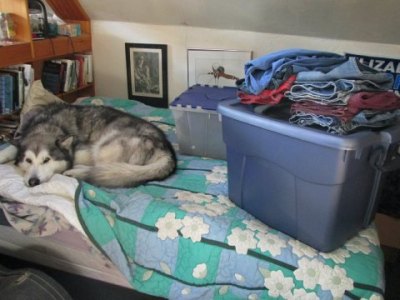 Because the weather ebbs and flows no matter what the season, I keep a couple pairs of jeans in the drawers and a few turtlenecks hanging in the closet, just in case.

Because I would never, ever pack dirty clothes away for the summer (or winter either), I did laundry yesterday, even though I wasn’t out of underwear yet. The timing turned out to be fortuitous: not only was it a stellar drying day — everything was dry by 2;30 even though I got a late start — but the Airport Laundromat was offering a two-for-one deal. There’s been a poster on the wall since forever that says Wednesday is two-for-one day, but I thought it was a relic from days gone by. If so, it’s back on active duty: I put my quarters ($5.25 worth) in one machine and the attendant started the other one with her key. 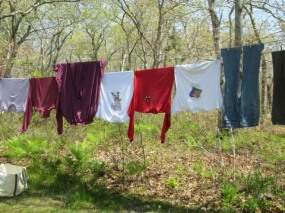 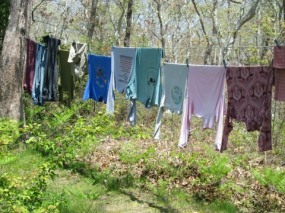 To my eye this is a pretty typical early to mid May line, though maybe heavier on the jeans than usual: five pairs of jeans trumps one pair of shorts. Three long-sleeved T-shirts, four with short sleeves. No muscle shirts or tank tops — they’re just now coming out of storage — but no longjohns either. Didn’t I swear earlier this month, in “Spring on the Line,” that the longjohns were done for the season? True, on a couple of chilly windy days I was tempted to don a pair, but I kept my vow.

There are only three turtlenecks on the line, and two 3/4-sleeve Henley jerseys. Only last fall did I discover the wonders of 3/4-sleeve Henleys. I don’t have to roll the sleeves up when washing dishes, and since they have neither cuffs nor necks they won’t be looking tatty after a few years like all my turtlenecks do. This is a conundrum for frugal me: ratty, tatty turtlenecks have plenty of wear in them but what if someone sees those horribly frayed cuffs peeking out from under my sweater? One of the joys of living on Martha’s Vineyard is that most of my friends won’t notice and the rest of them won’t care. The real problem is that old T-necks are too grungy to give to the Dumptique but too usable to throw out — and they’re taking up space in my closet.

Anyway, most of the T-necks are going into storage, but the 3/4-sleeve Henleys have earned their summer hangers. I’m keeping them around.

Here’s an aerial view of almost the whole laundry line. There are a couple of jeans you can’t see in the upper-right corner. 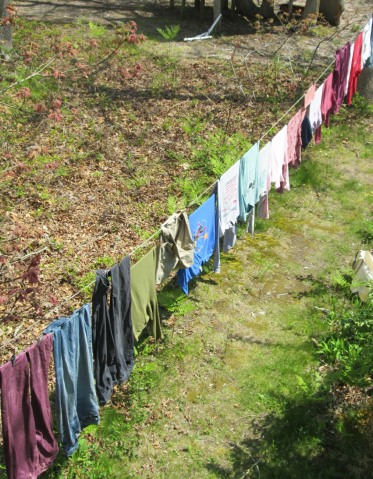 Susanna edits for a living, writes to survive, and has two blogs going on WordPress. "From the Seasonally Occupied Territories" is about being a year-round resident of Martha's Vineyard. "Write Through It" is about writing, editing, and how to keep going. She also manages the blogsite for the Women's Committee of We Stand Together / Estamos Todos Juntos, a civic engagement group on Martha's Vineyard.
View all posts by Susanna J. Sturgis →
This entry was posted in home and tagged clothes, laundromat, laundry, spring, Travvy. Bookmark the permalink.

3 Responses to Late May on the Line