Spring has been off and on, back and forth, this year, which isn’t all that unusual though everybody thinks it is. 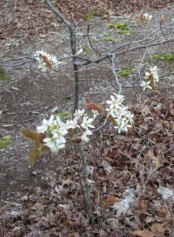 What is somewhat unusual is that when I didn’t see the shadbush blooming in the woods at the end of April, I didn’t assume I’d missed them. I assumed they were late.

As usual I was wrong. They were right on time.

The blooming of the shadbush is sign that spring is really here. It’s named for the shad, which are said to start running at the same time. Shad is a subspecies of herring. A neighbor up the road pointed out that we don’t have shad on Martha’s Vineyard, but “herring bush” sounds too fishy to me. Besides, I call them “ghost trees” for the way the blossoms seem to float deep in the woods, suspended in the air.

Every year I try to take a photo that conveys what my eyes see, and every year I fail. My photography skills and my little point-and-shoot aren’t up to it. But I keep trying. I’m much, much more competent with words than I am with a camera, but I often can’t get the words to say exactly what I mean either.

My hiking companion tolerates — up to a point — my frequent stops to pull my camera from my hip pocket and try one more time. He takes the opportunity to nose in the leaves and inspect the trees for news of whatever’s passed this way since yesterday.

In West Tisbury the ghost trees bloom when the oak leaves are just budding and brambles and pine are the only obvious green in the woods. When I passed through Vineyard Haven late yesterday afternoon, the oaks along State Road were almost fully leafed out. Spring arrives down-island before it comes to my town. This is true every year, and every year I’m surprised by the difference a few miles make.

In last year’s blog about the ghost flowers I noted that the late Dionis Coffin Riggs, poet and perceptive observer of the natural world, gave May 10 as the date for the shadbush blooming. As usual, she was right on target.

At the end of that post I wrote: “Now that ‘May 10’ is imprinted in my non-digital memory, I’m going to stop expecting the ghost trees at the end of April.”

As usual I was wrong.

Susanna edits for a living, writes to survive, and has been preoccupied with electoral politics since 2016. She just started a blog about her vintage T-shirt collection: "The T-Shirt Chronicles." Her other blogs include "From the Seasonally Occupied Territories," about being a year-round resident of Martha's Vineyard, and "Write Through It," about writing, editing, and how to keep going.
View all posts by Susanna J. Sturgis →
This entry was posted in outdoors and tagged spring, Travvy, West Tisbury. Bookmark the permalink.

9 Responses to Surprised, as Usual