Every year I think I’ve missed the shadbush blooming and every year I’m wrong. Driving down State Road I glance repeatedly into the mostly oak woods that haven’t leafed out yet. When the fragile white flowers appear, they seem to hang suspended in the air against a gray and brown backdrop that is anything but fragile. 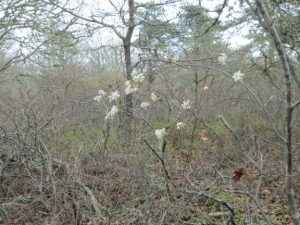 The shadbush got its name because they bloom when the shad are running. When I blogged about them two years ago, a fellow blogger up the road noted that we have no shad on Martha’s Vineyard so they might be more sensibly called “wild pear.”

“Wild pear” is indeed one of the names by which this small tree, Amelanchier, is known, along with shadbush, shadwood or shadblow, serviceberry or sarvisberry, juneberry, saskatoon, sugarplum or wild-plum, and chuckley pear. Shad is a subspecies of herring, which we do have here, but “herring bush” sounds fishy.

I call them “ghost trees” for the way they appear ghostly deep in the just-past-winter woods. That’s probably as good a name as any. In any case, once again I thought I’d missed them, then a week ago they appeared, tentatively at first, but by the weekend they were everywhere.

When I mentioned them at writers’ group Sunday night, mystery writer Cynthia Riggs noted that her mother, the late Dionis Coffin Riggs, gave May 10 as the date for the blooming of the shadbush. 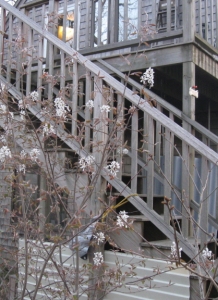 At the foot of my outside stairs

Sunday was May 10. Not only that, when I found my photos of the ghost trees from previous years, a full half of them were dated May 10 and the rest were dated between the 6th and the 11th.

When I don’t spot the ghost flowers in the woods by the end of April, I get worried. No wonder: I’ve got the estimated time of arrival wrong. Dionis had it right, from years of observation. My camera has it right because it’s programmed to remember dates. Now that “May 10” is imprinted in my non-digital memory, I’m going to stop expecting the ghost trees at the end of April.

Along the Old Courthouse trail, 1

Along the Old Courthouse trail, 2

Can’t remember where this profusion was — Pine Hill or Halcyon Way?

Susanna edits for a living, writes to survive, and has been preoccupied with electoral politics since 2016. She just started a blog about her vintage T-shirt collection: "The T-Shirt Chronicles." Her other blogs include "From the Seasonally Occupied Territories," about being a year-round resident of Martha's Vineyard, and "Write Through It," about writing, editing, and how to keep going.
View all posts by Susanna J. Sturgis →
This entry was posted in outdoors and tagged Cynthia Riggs, spring. Bookmark the permalink.