The snow hung around long enough this winter that I almost forgot what my neighborhood looked like before the snow started falling.

Gradually the snow melted. Gradually spring flowers bloomed and the grass turned green. Now the oaks are leafing out. Soon a layer of yellow-green oak pollen will overlay the dust on my car. (This spring has been very, very dry. I live on a dirt road. Every couple of days I hose off the rear window so I can see out of it.)

It’s almost as if the winter just past never happened.

Most of our snowstorms this past winter came with high winds. One of them toppled a slender birch across a path that Travvy and I often walk. The birch’s many small branches hung down like a curtain, blocking our way. Between the other trees and the heavy scrub on either side, there was no easy detour. Travvy could duck easily under the fallen tree. I had to crouch down and frog-walk through the branches. The branches often scraped the hat off my head.

Evidently other walkers were getting annoyed with the obstruction. One morning all the hanging branches had been trimmed from the trunk. Walking under was easier than walking through. My hat stayed on my head. I was grateful.

The fallen birch was still partly attached to its trunk. It began to leaf out along with its upright companions.

Fallen it might be, but it was still attached to its roots and thus to the earth. It lived.

Then one morning the path was clear. No birch. 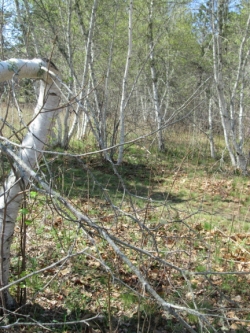 In the summer of 2011 Hurricane Irene brought down a big oak near another path that Travvy and I often walk. I was so sure it was dead that I told a neighbor about it. He heats with wood and is always on the lookout for fuel. This particular downed tree, though, was not easily accessible by pickup, and transporting its logs would be no job for a wheelbarrow.

The following May, to my astonishment, the fallen oak leafed out. Like the birch, it was still partly attached to its trunk. Attached enough to keep it alive. 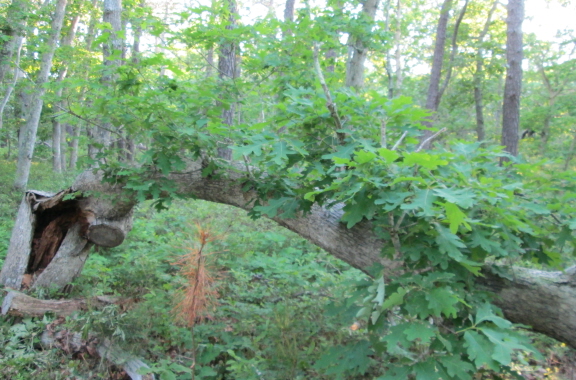 This spring there were no buds. Winter had sundered my oak from its trunk.

I think it was winter, not a woodsman. Those clean cuts were made three years ago, to clear a large branch off the trail. Could a person, or even two or three people, have separated tree from trunk and lifted it out of the way? Perhaps, but I’d rather believe it was the winter just past.

In a late March post, “Sunderings,” I blogged about people sundered from their roots, whether by war, economics, or some other nearly irresistible force. Every time I walked by it, my recumbent oak reminded me that even damaged roots can sustain life. The oak was lucky: when the hurricane brought it down, it fell alongside the path, not across it. The little birch was not so lucky: it blocked the way. I’m happy that the way is clear and sad that the birch will never leaf out again.

Susanna edits for a living, writes to survive, and has been preoccupied with electoral politics since 2016. She just started a blog about her vintage T-shirt collection: "The T-Shirt Chronicles." Her other blogs include "From the Seasonally Occupied Territories," about being a year-round resident of Martha's Vineyard, and "Write Through It," about writing, editing, and how to keep going.
View all posts by Susanna J. Sturgis →
This entry was posted in Martha's Vineyard, outdoors and tagged my neighborhood, perfectionism, spring, walking, winter. Bookmark the permalink.