How bad is the housing situation on Martha’s Vineyard? In recent memory (which is to say mine, which goes back 30 years), it’s never been good. No situation is “good” where about 20 percent of the population has to move twice a year because they can’t find an affordable year-round rental or because the only way they can pay the mortgage is by renting their home out in the summer.

But the surge in property values at the turn of the century made it worse, and the economic meltdown of the last decade made it worse yet.

“The first level of affordability here is a year-round lease, which is virtually nonexistent right now,” said David Vigneault, executive director of the Dukes County Regional Housing Authority (DCRHA), in a Martha’s Vineyard Times story this past winter. “There was virtually nothing this fall for year-round rentals.”

Think about it. Maybe you have to live in a seasonal resort to appreciate what a precious thing a year-round rental is, and how catastrophic the reality behind David’s statement: “There was virtually nothing this fall for year-round rentals.”

I’ve gone on before about housing on Martha’s Vineyard and most certainly will again, but this blog post focuses on “Housing 101,” an event I attended Tuesday night at the Vineyard Haven public library.

David Vigneault was the speaker. If he’s not the most knowledgeable person on the planet about the Vineyard housing situation, he’s definitely in the top three. He titled his talk “Myths, Half Truths, and Good Questions with Tough Answers.” The purpose wasn’t to give the whys and wherefores of the housing crisis but to address some of the myths and misconceptions about it.

To say that myths and misconceptions abound is an understatement. Given a pervasive and intractable problem with complex economic and political causes, we love to point fingers, blow isolated incidents into universal truths, and come up with ingenious ways to avoid thinking too hard about what’s going on in front of our noses. In this, as in so many things, Martha’s Vineyard is a lot like the rest of the country.

So here are some of the points David made, as imperfectly scribbled down by me. For more details and lots of scary statistics, see the links at the end of this post. 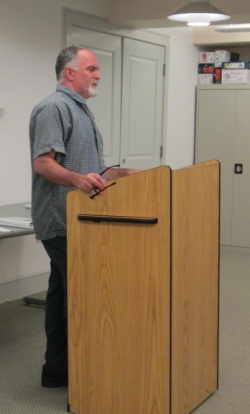 David Vigneault at the podium

Both the DCRHA and the Island Housing Trust (with which it works closely) focus on the island workforce — teachers, tradespeople, small business owners, health-care workers, municipal employees, and others. You have to have an income to even be eligible, and in today’s climate eligibility is only the first step. People in other places aren’t likely to uproot themselves from their local support systems and move “on spec” to a place where they have neither kin nor jobs, and where the cost of living is considerably higher than the state average.

“Affordable housing,” in other words, is not “poor people’s housing.” That’s another issue.

Morgan Woods is a 60-unit affordable apartment complex in Edgartown. Opened in 2007, it’s become a rousing, award-winning success. Turnover has been low, so it’s got a waiting list. The confusion arises because a little over half the units are for tenants with incomes below the area median income (AMI). The others are priced for those earning between 110% and 140% of the AMI. If one of the latter becomes available, a person earning considerably less than the AMI probably won’t find it affordable.

Half truth: The cost of housing isn’t the problem — low wages are.

The “affordability gap” — the difference between what a household earning the median income can afford to buy and the median cost of buying or building a house — is definitely a problem. The Martha’s Vineyard Commission’s 2013 housing needs assessment calculated the gap at $213,500, the second-highest in the state (Nantucket was #1). But the prospects for raising wages in a seasonal, service-based economy are not good, especially in the short term.

Housing 101 attendees in the downstairs program room of the Vineyard Haven public library.

Myth (or maybe half truth?): More landlords would rent year-round if it weren’t for all the irresponsible tenants out there.

Tenant-from-hell stories and greedy-landlord stories abound, but as David pointed out, “it’s easy to blackball yourself around here.” Word travels fast, and if you screw up more than once, it won’t be a secret for long. The decision to rent seasonally or year-round is often an economic one. Some year-round residents rent seasonally because they need the money to make ends meet. In the aftermath of the 2008 financial crisis, belt-tightening seasonal homeowners were more willing to rent year-round instead of just for the winter — at a time when financially strapped year-rounders couldn’t afford to take advantage of the opportunities.

Half truth (or myth?): If zoning and other restrictions were removed, the housing problem would take care of itself.

Market forces, David noted, got us into this predicament, so it’s unlikely that the removal of all restrictions would make it go away. At the same time, however, the six island towns have been examining and amending local rules and regs in order to increase the supply of year-round rental housing. Restrictions on density have been problematic on several fronts, notably funding.

The housing crisis is daunting, and it isn’t going away, but David took encouragement from the fact that now there is general island-wide agreement that this is our problem, and that many people are working on it from different angles.

“Martha’s Vineyard Housing Shortage Reaches Critical Mass,” February 18, 2015. A very good introduction to the problem and the history of efforts to deal with it.

“Experts Examine Martha’s Vineyard’s Affordable Housing Crisis,” April 15, 2015. Explores the implications of the housing crisis for employment, with a focus on teachers, and for the general health of the community; emphasizes the need for island-wide cooperation.

Susanna edits for a living, writes to survive, and has been preoccupied with electoral politics since 2016. She just started a blog about her vintage T-shirt collection: "The T-Shirt Chronicles." Her other blogs include "From the Seasonally Occupied Territories," about being a year-round resident of Martha's Vineyard, and "Write Through It," about writing, editing, and how to keep going.
View all posts by Susanna J. Sturgis →
This entry was posted in Martha's Vineyard, public life and tagged community, housing, island economics, Vineyard Haven library, year-rounders. Bookmark the permalink.