We had a wintry December on Martha’s Vineyard. Life gave me ice, so I got into ice diskology — unmolding the ice that froze in Travvy’s outside water dish and arranging the resulting disks on my little deck. I called it “dog dish ice art.” Quite a few of my Facebook friends liked it, so I kept doing it. We even had a little ice disk nativity scene co-starring Travvy and Garfield. 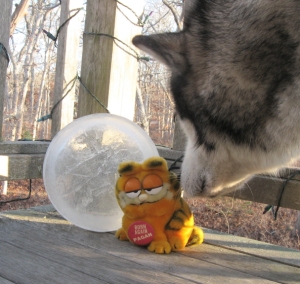 All of this is to say that ice disks come and ice disks go, but I’ve taken pictures of all of them. This is what the winter of 2014 has looked like on my deck. 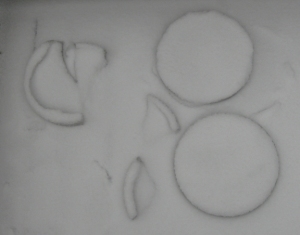 The new year began with two old-year disks, one of which was somewhat the worse for wear. On January 2 they got snowed on.

. . . and thin. The thin ones play better with light, but the thick ones last longer. 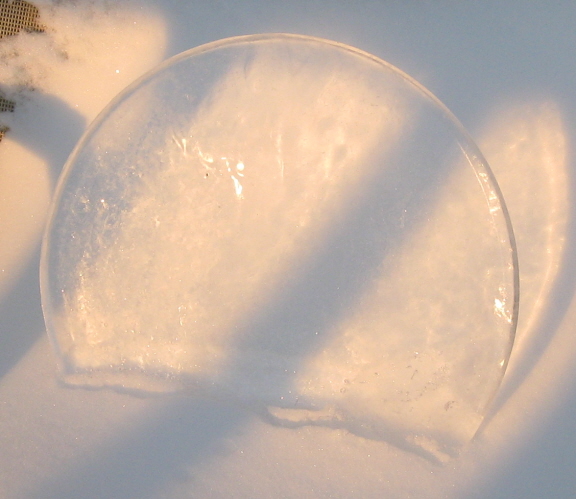 When the cold sticks around, the ice disks accumulate. 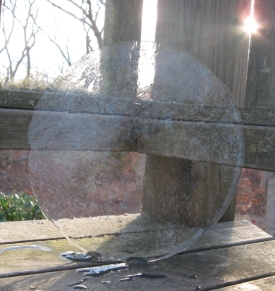 Disks have a colorful nightlife. I string green and purple lights on the deck railing so I can see the dark better.

Disks can climb stairs. I realized this after one disk took a tumble after some zealous snow shoveling. It survived the one-story fall. As I carried it back up the stairs, I thought, Why not?

One, two, three more joined it.

Then they all turned to puddles.

Ice disks are what they are, but they can be persuaded to carry a message.

When I started a row along the shortest side of my deck, I didn’t realize that it would grow into the season’s longest to date. Here’s the sextet.

When I tried to make room for #7, my hand slipped.

First I was sad. Then I decided that cracks add character.

Yesterday morning there were eight. The angle makes ’em hard to count, but they’re there.

Yesterday, however, got warm.

And by the end of the day this was all that was left. 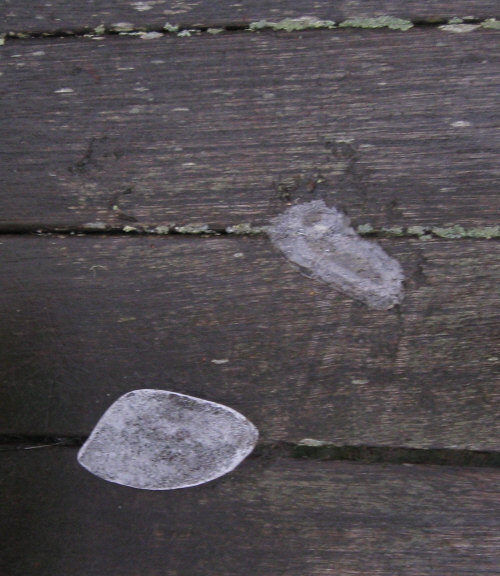 Susanna edits for a living, writes to survive, and has two blogs going on WordPress. "From the Seasonally Occupied Territories" is about being a year-round resident of Martha's Vineyard. "Write Through It" is about writing, editing, and how to keep going. She also manages the blogsite for the Women's Committee of We Stand Together / Estamos Todos Juntos, a civic engagement group on Martha's Vineyard.
View all posts by Susanna J. Sturgis →
This entry was posted in home, outdoors and tagged ice disks, off-season, winter. Bookmark the permalink.