Shirley brought this piece to Cynthia Riggs’s Sunday night writers’ group, to which we both belong. It’s such a wonderful evocation of the interrelationships that make Martha’s Vineyard, and our town of West Tisbury, such a special place that I said “Gimme, gimme — please?” And Shirley said yes. Shirley’s a regular contributor to Martha’s Vineyard Magazine. She’s lived in West Tisbury since before I was born.

My plumber is one of the EMTs who used to come to pick up my husband when he fell before he had to go live in a nursing home. The woman who cleans my house every two weeks was a student of mine in the 1970s when I was a teacher in the Edgartown School. One of the tellers in my bank is also a former student.

Several of the aides in Windemere were former students of my husband, who was a resident there — one even took care of his mother many years ago. And another is so young that her mother was his former student.

The register of deeds grew up with my older daughter, Deborah, and our carpenter friend used to play with my younger daughter, Sarah, when they were toddlers. The contractor who built Deborah’s house and later attached my “granny apartment” to it was in her class at school. About fifty years ago, when I was a children’s photographer, I took pictures of a friend’s four children, one of whom grew up to be James Taylor, the successful singer. I’ve been invited to a party at Laura Roosevelt’s house. She is married to Charlie Silberstein, and is the sister of Nancy Roosevelt, who cleaned my house back in the hippy years. Laura and Nancy are both grandchildren of President Franklin D. Roosevelt, who led this country through World War II when I was growing up.

One of the wonderful features of this Island community is the diversity of its residents. Last night I went to a dinner party in my town of West Tisbury. First of all, it was a potluck dinner party, which meant that there were many different kinds of food — diversity in our eating habits. But more interesting than the diversity of food was the diversity of the people who brought it. The common denominator was that we were all neighbors and friends.

The age difference varied from less than a year to almost 88 years, and lingered between four generations. The number of men to women was about equal – approximately ten of each. There were two teenagers and three children under twelve, one a baby who slept through the entire party. And I shouldn’t forget the four dogs — one large, one medium, and two small — that mingled with the partygoers and each other with no disputes.

The contractor chatted with the computer consultant, the Pulitzer Prize author conversed with the retired teacher, the successful farmer talked memories with the computer analyst, and one of the teenagers kept track of the toddler, who was her nephew. The hostess was the ex-wife of one of the invitees, and she spoke with his present wife. The other Pulitzer Prize winner confessed to the carpenter that he was glad his son had been accepted at Harvard because it meant he would be close enough to come home often.

One of the most interesting things for me about this congenial group of people was that this February 8th party was being held in the house I had lived in for fifty-five years, which I moved out of two years ago on February 8. Although it was no longer my house, most of the dinner guests had been in it many times since they were children. And the hostess was the ex-wife of one of those children. 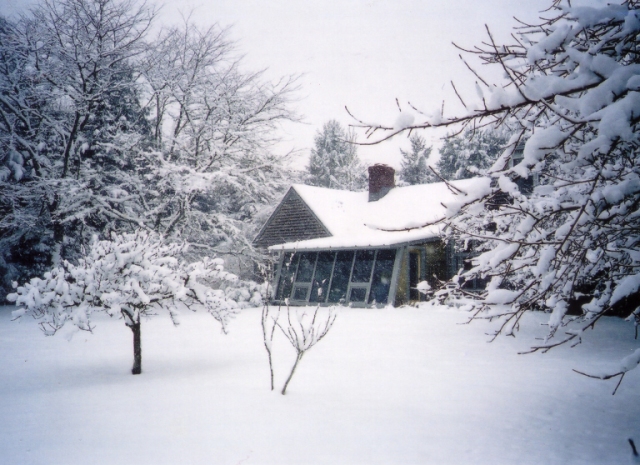 The house where Shirley lived for 55 years, and where the potluck was held the other night. This photo was taken after the blizzard of 2003. The house looks a lot like that right now.

Susanna edits for a living, writes to survive, and has been preoccupied with electoral politics since 2016. She just started a blog about her vintage T-shirt collection: "The T-Shirt Chronicles." Her other blogs include "From the Seasonally Occupied Territories," about being a year-round resident of Martha's Vineyard, and "Write Through It," about writing, editing, and how to keep going.
View all posts by Susanna J. Sturgis →
This entry was posted in Martha's Vineyard and tagged community, Shirley Mayhew, West Tisbury, year-rounders. Bookmark the permalink.