I do my laundry at the Airport Laundromat. When the laundry hamper is high and the clean underwear supply approaching nil — about every three weeks — I start watching the weather for a good drying day. Then off I go to the county airport. (It’s not called the Airport Laundromat for nothing.)

While the washers wash, Travvy and I go for our morning walk. Animal Health Care, a vet clinic and kennel, is nearby. As we cross the lawn, one dog out back usually starts barking. This sets the others off. Trav loves it. The grass, trees, and bushes smell like dogs he’s never met. He likes that too.

There are plenty of places to walk around the Airport Business Park, as it’s called. Over the last few months, we noted the progress of a small building going up alongside Flatbread Pizza (formerly Nectars and, before that, the Hot Tin Roof, among other things). Turned out to be a new liquor store, technically in Edgartown but wonderfully close to the border of my dry town.

Warning sign at building site. No enforcers were in sight, so we ignored it.

Earlier this month, we discovered the scenic site that I blogged about in “NIMBY Delight.” It’s not hard to get off the beaten path at the Airport Business Park.

Sometimes we even stroll through the airport terminal. Travvy woos enthusiastically at the people waiting in line, of whom there are rarely more than a handful. The terminal was built in the late 1990s with July and August in mind, but for ten months of the year it’s neither July nor August so the place usually feels like an abandoned movie set. A fellow who works for one of the car-rental agencies has a Siberian husky. He converses with Trav and shows me dog photos on his smart phone.

The TSA people have never tried to stop us. Our passing through is probably the high point of their day. I wouldn’t mind having a job that required me to do nothing all day, but only if it let me do nothing sitting down. 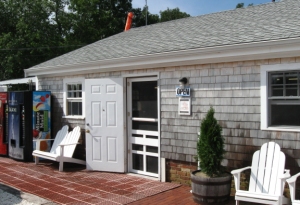 The Airport Laundromat, July 2011. It looks just like that now, except the storm door is up and usually shut.

In my D.C. days, the neighborhood laundromats were bustling places. Women bustled in and out and conversations swirled around me; I could either eavesdrop or join in, depending on my mood. The Airport Laundromat is not like that. Even in summer I’m often the only one there, and since Trav and I are out walking, I’m not really there either.

Most people drop their laundry off and pick it up later. In summer B&Bs and others drop off their sheets and towels. (From my years as a chambermaid at the Lambert’s Cove Inn [ca. 1988–1991], I can testify that dirty linen does tend to pile up when you’re in the hospitality business.)

The women who work at the Airport Laundromat are Brazilians. They speak Portuguese while they work, folding laundry and troubleshooting the washers and dryers. One of them rarely smiles, even when talking with her co-workers and friends. They change my $20s for smaller bills so I’m not stuck with 80 quarters from the change machine.  They’re courteous and efficient, but the laundromat they work at and the one I do my laundry at are not the same place. Our psychic maps of Martha’s Vineyard are very different. I’ve often wondered if they overlap at all.

Monday afternoon I took a comforter in to be laundered. Compared to the hour it would have taken to do it myself, not to mention the line-drying time, $18 was a good deal. Tuesday afternoon I stopped by to pick it up. As I walked through the front door, the woman who never smiles was coming in the side door with my comforter, folded and protected by a plastic bag, in her arms.

I beamed, absurdly delighted. “You recognized my car,” I said.

She smiled back and said yes, she did.

I wrote a check, gathered up my clean comforter, and left, smiling to myself.

Driving home I recollected an incident from my first winter here, 1985/86. My winter rental was near Five Corners, and I was frequently in and out of the Black Dog Bakery. My morning usual was coffee and a raisin bran muffin. My afternoon usual was coffee and a peanut butter chocolate chip cookie. From late fall into mid-spring, the waiting time was not long. As the weather got warmer, the lines got longer.

One afternoon, it reached all the way to the door. I stepped in, assessed the situation, and was about to give up. One of the counter workers caught my eye and nodded. I made my way to the cashier, bypassing the long line. My coffee and peanut butter chocolate chip cookie were waiting for me on the counter. I paid for them and left.

I’d been recognized. I was a regular. Maybe I belonged on Martha’s Vineyard after all.

Susanna edits for a living, writes to survive, and has two blogs going on WordPress. "From the Seasonally Occupied Territories" is about being a year-round resident of Martha's Vineyard. "Write Through It" is about writing, editing, and how to keep going. She also manages the blogsite for the Women's Committee of We Stand Together / Estamos Todos Juntos, a civic engagement group on Martha's Vineyard.
View all posts by Susanna J. Sturgis →
This entry was posted in Martha's Vineyard and tagged airport, community, laundromat, psychic map, Travvy. Bookmark the permalink.