Drumming in the Rain

The second of the three jobs that have kept me crazy-busy since Memorial Day has gone home (on time!). Finally I’m getting back to Squatters’ Speakeasy. What little writing I managed to do in June was mostly tweaking and revising. Tweaking and revising comes easy to me — hey, it’s what I do for a living, right? 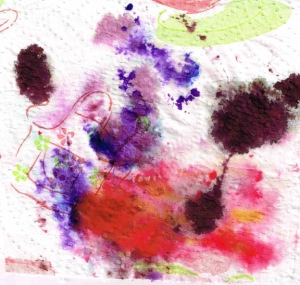 First-drafting, on the other hand, takes courage and stillness and strength, and when I’m working flat-out, all three are in short supply. But this week I got back to it. Here’s proof. I do my first-drafting in longhand, with fountain pens. When you fill your pens from bottles of ink, you have to blot the nibs and (invariably) wipe your fingers. I do this on a square of paper towel that doubles as a coaster for my tea mug. To the right you’ll see what the current blotter/coaster looks like.

I’m writing the rent-party scene. Well, it’s not exactly a rent party: it’s a party to raise money so Mama Segredo’s friend Silvia can get her porch fixed. Silvia is sitting out in front of her house, knitting in her lap, cane at her side, introducing Mark (who has a guitar hung around his neck but isn’t playing at the moment) to Fernando from across the street. Nearby Suze and several members of her women’s drumming circle are drumming away, and people are dancing on the sidewalk and in the driveway. Also in the driveway, a face-painter (don’t know her name yet) is painting cat whiskers on a little girl’s cheeks, and Giles is sketching a customer’s portrait in charcoal. Out back Mama Segredo is supervising the refreshment tables while two musicians play klezmer on clarinet and bass.

OK, OK, I thought. I get the idea but I’m getting bored. Time for something to happen, OK?

Whereupon the guy who’d been watching and listening from across the street comes over. Mark watches him watching the drummers and finally says, “You’re a drummer.” To which the guy responds, “When I’m drumming, I’m a drummer.”

Pretty soon Suze and the newcomer are sitting on opposite sides of her three congas and drumming together. I watch their hands fly back and forth, hers light brown, his a little darker, as if they’d been weaving this pattern together for years.

Whew. The purpose — or maybe a purpose — of the scene had revealed itself. Just in time, too, because (1) Travvy and I hadn’t gone for our morning walk yet, and (2) it was starting to sprinkle. For the last two or three weeks it’s often felt on the verge of raining but nothing’s come of it. It’s been so humid that if you’d wrung out the air you could have watered a big garden. This sprinkling, however, felt serious enough that I donned my rain slicker.

By the time we reached the trail behind the school (a quarter mile at most), it was pouring. We walked mostly under the trees but everything below the hem of my slicker still got soaked. Travvy doesn’t like getting his paws wet but rain he doesn’t mind, and I love watching the water fly off him when he shakes. I wish I could shake like that.

Coming up Pine Hill, I walked on the raised middle of the (dirt) road while water ran in gullies on either side. Finding dry ground to walk on got hard, harder, and then impossible. My new blue hiking boots are water-resistant but definitely not waterproof. Squish squish squish.

The rain had mostly slacked off by the time we got to the nearest neighbors’. Shadows were appearing on the road. Travvy stopped dead, looking toward the neighbors’ driveway.

Where a guy I’d never seen before was walking slowly, drumming on the air with his drumsticks.

Susanna edits for a living, writes to survive, and has two blogs going on WordPress. "From the Seasonally Occupied Territories" is about being a year-round resident of Martha's Vineyard. "Write Through It" is about writing, editing, and how to keep going. She also manages the blogsite for the Women's Committee of We Stand Together / Estamos Todos Juntos, a civic engagement group on Martha's Vineyard.
View all posts by Susanna J. Sturgis →
This entry was posted in music, work, writing and tagged editing, music, Squatters' Speakeasy, writing. Bookmark the permalink.

2 Responses to Drumming in the Rain