I don’t want to jinx anything here, but for the last several weeks I’ve been working on novel #2 — and it’s alive. It’s cooking. When I sit down to write, words come through my fingers. Characters show up unannounced. They open doors I didn’t see and tell me things I couldn’t imagine. 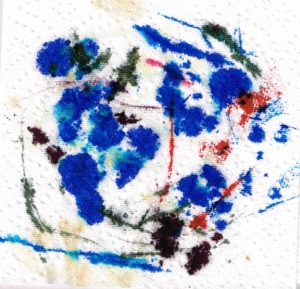 What, you ask, does a folded-up paper towel with ink blots all over it prove about anything?

I do my first-drafting in longhand, with fountain pens. At last count I had nine pens and almost as many bottles of ink, all different colors. After a pen is filled, it has to be blotted.

I use different colors for different scenes, so I can keep them straight in my ring binder. If a scene’s in “Tropical Blue,” I’ll use “Fireball” for scribbling comments in the margin. (Fireball, a bright orangey red, is good for note scribbling no matter what other colors are in play.)

When I’m  not writing, the folded-up paper towel is just a coaster for my morning tea mug and my evening beer stein. It collects tea stains. Tea stains are the pale brown blotches in the lower left. They don’t exactly catch a person’s eye.

Another sign that writing is going on: spent matches collect around the blotter. This is because I light a candle or two when I’m writing. While the candle burns, I write. I don’t do dishes or download email or (candles and pens forbid) check out Facebook.

This is my favorite candle holder. I bought the grappa at the suggestion of the late Lisa A. Barnett (1958–2006), science fiction writer, theater editor, and all-round wry and brilliant person. After one swallow of grappa, I swore off it for life. I used the rest of the bottle to pour libation for Lisa on the first anniversary of her death, and it’s been a candle holder ever since.

What I’m working on is my second novel, tentatively titled The Squatters’ Speakeasy. Squatters popped into my head almost exactly 10 years ago, in April 2003, as an idea and a scene. The idea was that a bunch of musicians, artists, and free-floating misfits take over a Vineyard trophy house and turn it into a speakeasy. The scene was two archers on a deserted roadside not far from South Beach in Edgartown. While I watched, they came out of the woods, ducked back when a car passed, then one of them drew his bow, took aim, and shot an arrow into the terminal O of a Monticello Real Estate sign.

No, Monticello Real Estate does not exist on real-time Martha’s Vineyard. Yes, the scenario has wish-fulfillment all over it. Vineyarders appropriating a seasonal monster house for year-round creative use? A speakeasy inspired by the late, great Wintertide Coffeehouse? Two anonymous archers — it wasn’t till this spring that I learned who they were — talking back to a particularly snooty real estate company? And all this barely a year and a half after 9/11, when such talking back was bound to be called terrorism?

Over the years I played with the idea and the scene. I learned that Squatters takes place 10 or 12 years after The Mud of the Place and on the same alternate Martha’s Vineyard; it involves some of the same characters and has a lot to do with housing. But for a host of reasons, it never took off. Until spring 2010, I had a horse. Between horsekeeping and editing full-time, I had little energy for writing. The Mud of the Place was published in December 2008 and pretty much sank without a trace, so why even think about writing another novel? Etc., etc., etc.

You’ll notice, though, that the URL for From the Seasonally Occupied Territories, started in July 2011, is http://squattersspeakeasy.com. “Squatters’ speakeasy” was a vision, a state of mind, as well as a working title, and this blog was part of it from the get-go.

So can I keep both the blog and the novel going at the same time? At first I thought not: one of them was bound to suffer. Then it dawned on me that writing a(nother) novel about Martha’s Vineyard is part of my year-round Vineyard life. The Vineyard is this big hunk of sheep’s wool (or maybe malamute fur) that I’m trying to spin into a narrative thread or two or three. Maybe I could blog about the writing?

Many writers, including me, love to talk about writing. There are blogs galore devoted to all aspects of writing. Whether anyone besides writers, aspiring writers, and artists in other media pay any attention is an open question. In short, I don’t want to bore the pants off you regular and irregular readers who aren’t especially interested in writers talking about writing — so don’t worry: I’ll blog about spring and summer and Travvy and license plates and how the roundabout is working out, as well as about what the squatters are up to.

Stick around, guys. This could get interesting. 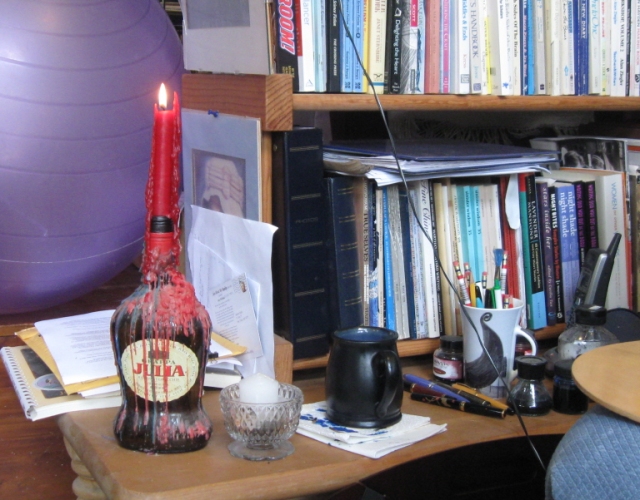 Susanna edits for a living, writes to survive, and has been preoccupied with electoral politics since 2016. She just started a blog about her vintage T-shirt collection: "The T-Shirt Chronicles." Her other blogs include "From the Seasonally Occupied Territories," about being a year-round resident of Martha's Vineyard, and "Write Through It," about writing, editing, and how to keep going.
View all posts by Susanna J. Sturgis →
This entry was posted in writing and tagged 9/11, arts, blogging, Squatters' Speakeasy, terrorism, Wintertide, writing. Bookmark the permalink.