Whenever a hurricane barrels up the East Coast or a blizzard bears down on New England, a few panicky friends halfway around the country are sure that Martha’s Vineyard is about to be flooded off the planet.

True, on a map the place looks vulnerable, surrounded as it is by ocean and with a maximum elevation of about 350 feet above sea level. In reality? Not so much. True, the roads close to the shoreline usually flood and beach erosion can be formidable, but I, like most Vineyard working stiffs, don’t live anywhere near a beach. Hurricanes and blizzards knock trees down and the power out, but so do the nor’easters — “three-day blows” — that don’t get reported in other parts of the country.

Nevertheless, we do prepare for considerably worse. Late this morning, through the usual combination of connections and coincidences, I found myself at the island’s first-ever disaster shelter drill. The drill was a dry run for the Vineyard’s disaster-service organizations to practice coordinating their efforts. Participants included the American Red Cross, the Medical Reserve Corps, the Salvation Army, the Boy Scouts, and the newly formed Martha’s Vineyard Disaster Animal Rescue Team (MV DART).

I cannot tell a lie: It was MV DART that piqued my interest. One of the many lessons learned from Hurricane Katrina in 2005 was that disaster planning had to take companion animals into account. Hundreds of thousands of pets died or were stranded, in part because they couldn’t be transported or sheltered with their humans. Today’s shelter drill included clients with pets.

When I approached the door to the Tisbury School gym, where the drill was being held, a sign directed incomers to “Register animals first.” An arrow pointed to the left. Travvy had stayed home, but leftward I went.

Canine disaster evacuees were played by stuffies. The guy on the left is Snoopy.

The several MV DART volunteers included a veterinarian, an animal control officer, and several other animal lovers who had put plenty of thought into what dogs, cats, and their owners might need in a disaster shelter. Not only dogs and cats either — I learned that when handling a pet rabbit it was important to keep the hind legs from kicking out. When afraid, a rabbit’s first impulse is to flee; a rabbit can also break its back by striking out too strongly with its hind legs.

The MV DART volunteers were prepared for sick pets, stressed pets, and stressed pet owners. Animals that live in the house are considered pets: dogs, cats, rabbits, birds, and the like. The shelter cannot accommodate barn animals. What if your pet goat or lamb lives in the house? They’ll probably decide on a case-by-case basis. 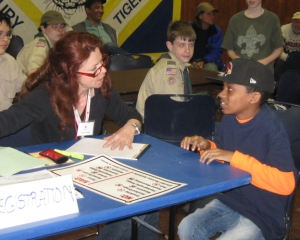 Registration for human clients was in the gym. Clients were played by Boy and Cub Scouts. Other Scouts stood (or sat) by waiting to render whatever assistance was needed.

The Medical Reserve Corps volunteers were ready to deal with the health emergencies and chronic conditions of shelter clients. 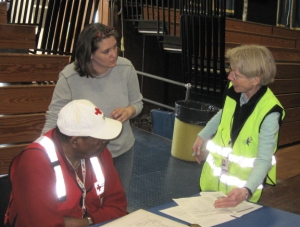 Drill coordinator Jim Thomas (left), the shelter manager, and a member of the Medical Reserve Corps hold a consultation. My point-and-shoot’s flash made those reflective strips glow!

After the drill itself, which lasted from 11 a.m. to 12 noon, the volunteers adjourned for a delicious lunch — pasta, meatballs and sauce, salad, garlic bread, and brownies — prepared by the Salvation Army, who got a hearty and well-deserved cheer for their efforts.

Susanna edits for a living, writes to survive, and has two blogs going on WordPress. "From the Seasonally Occupied Territories" is about being a year-round resident of Martha's Vineyard. "Write Through It" is about writing, editing, and how to keep going. She also manages the blogsite for the Women's Committee of We Stand Together / Estamos Todos Juntos, a civic engagement group on Martha's Vineyard.
View all posts by Susanna J. Sturgis →
This entry was posted in dogs, Martha's Vineyard, public life and tagged disaster planning, dogs. Bookmark the permalink.