After The Big Blizzard, the one that dumped 8 or so heavy crusty inches of snow here and 20 or 30 inches elsewhere in New England, I created a folder called “February 2013 Snow” and put all my photos in it.

Now “February 2013 Snow” has three subfolders, one for each February snowstorm. Who knew? Last year one brief January snow had to do for the whole winter. My Yaktrax never came out of the drawer. It’s only February 18 — over a month till the spring equinox. What next?

I like waking up to a world that looks entirely different from when I went to bed. 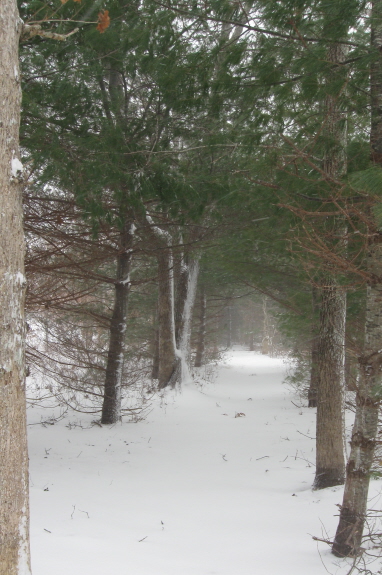 I walk the same paths several times a week. Other people walk them too. After it snows, it’s as if no human has been that way before. The ordinarily invisible passage of rabbits and cats, though, is revealed to the world. 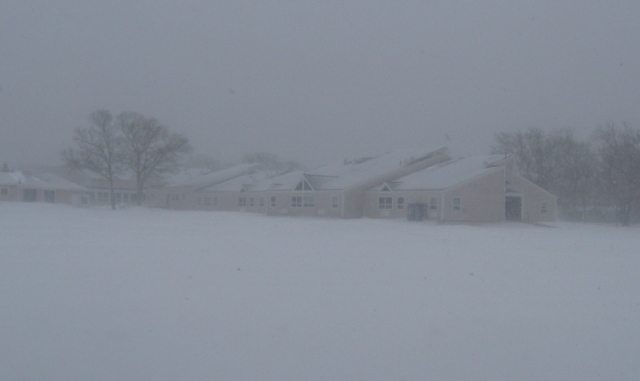 The West Tisbury School was almost whited out.

This February’s storms have fallen mostly on weekends. The kids probably miss having snow days, but they won’t miss having to make them up in June. One of my neighbors goes to school off-island. She missed one day because the boats weren’t running.

Travvy likes running in the snow. He also likes sleeping on my bed. The late Rhodry Malamutt liked to sleep curled up outside in the falling snow. After a while he’d look like a powdered-sugar doughnut. Travvy sticks his nose out the door. If snow is falling or wind is blowing, he backs up and finds somewhere dry to sleep.

Making a snow angel is hard when you’ve got a dog in tow and there’s no one around to help you up. Nevertheless, I gave it my best effort. 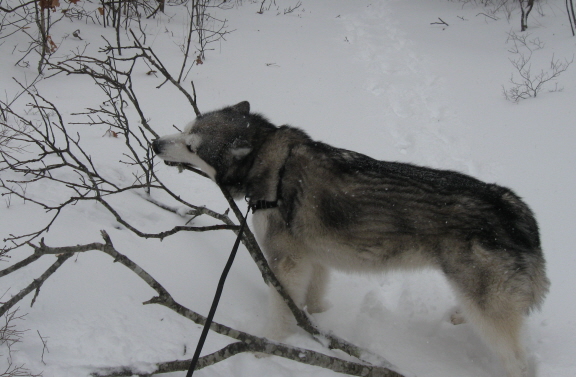 Trav wants to bring the branch along. 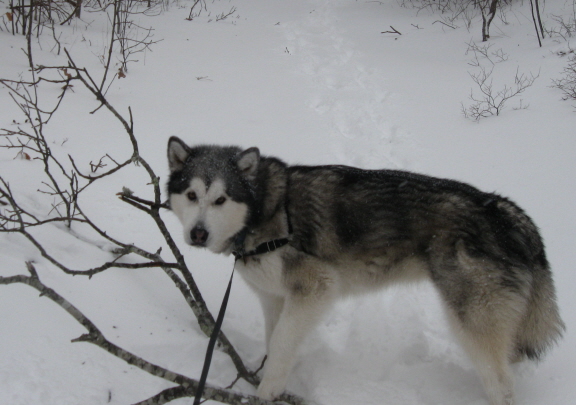 Trav: Aren’t you going to put that camera away and help?
Me: No.

Snow creates the world anew, but the end of this particular day was pretty spectacular. 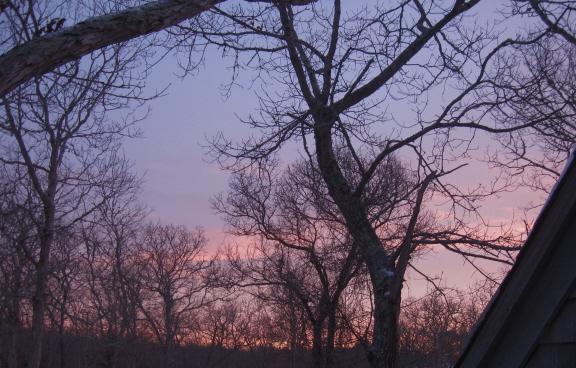 After Trav finished his supper — when it comes to Trav and food, “in the blink of an eye” can be taken almost literally — we headed out for a walk. One look at the sky and I went back for my point-and-shoot.

And probably my favorite of all . . .

This is last night’s sunset reflected in my west-facing window. Memo to self: When leaving the house, it’s OK to look back. You won’t turn into a pillar of salt, and you won’t get stuck with Hades.

Susanna edits for a living, writes to survive, and has two blogs going on WordPress. "From the Seasonally Occupied Territories" is about being a year-round resident of Martha's Vineyard. "Write Through It" is about writing, editing, and how to keep going. She also manages the blogsite for the Women's Committee of We Stand Together / Estamos Todos Juntos, a civic engagement group on Martha's Vineyard.
View all posts by Susanna J. Sturgis →
This entry was posted in home, Martha's Vineyard, outdoors and tagged my neighborhood, snow, Travvy, West Tisbury School, winter. Bookmark the permalink.

4 Responses to Fire and Ice